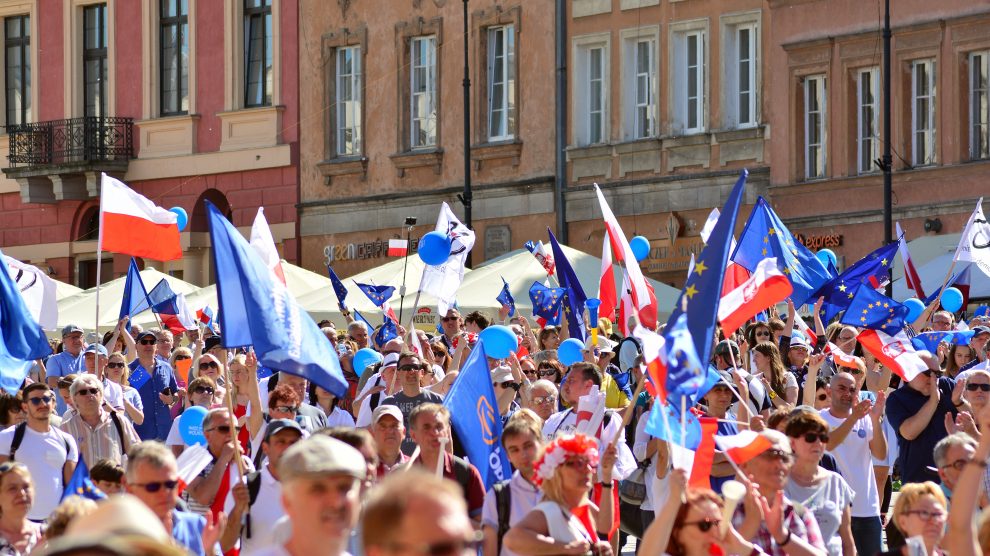 Wounded by infighting, Poland’s ruling coalition, led by the Law and Justice party, has been on the verge of collapse for months. Divisions within the main opposition party Civic Platform however mean that the opposition is unable to take advantage.

“I do not agree that the entire European community should be put on the altar of party games,” the MEP told the online website Onet on May 17, a few hours after announcing her resignation from PO.

Thun – who was active in Poland’s democratic opposition in the 1970s and 1980s – said that on many issues she did not agree with the party’s line, and that PO’s abstention on a vote to pass the EU recovery fund was the last straw.

“I do not agree that poorly conducted inter-party games should take place at the expense of projects aimed at supporting hundreds of millions of European citizens,” she wrote.

On May 4, the Sejm (Poland’s lower house of parliament) ratified the EU’s recovery fund but only after MPs from the Left, PSL-Koalicja Polska and Polska 2050 voted in favour, along with the ruling Law and Justice (PiS) party. The KO caucus – which PO heads – abstained.

The vote saved PiS from further fragmentation of the three-pronged coalition it leads. PO failed to capitalise on a crisis in the government and is now facing its own demise.

TV presenter Szymon Hołownia’s Polska 2050 party is catching up with PO in the polls – indeed, in one recent survey it was shown beating PO into third place – and in the Sejm the KO caucus has lost two MPs who crossed over to Hołownia’s newly registered party.

PO’s strategy on the EU vote had been in flux for some time, reflecting hopes that (PiS-led coalition might fall if the vote failed. PO leader Borys Budka initially announced his support for ratification, but then the idea of voting “against” won out, driven by the argument it would bring down the government.

“I am in favour of a tougher environmental stance,” Thun said, adding that she also ”fundamentally” differed from party leadership on “accepting refugees and providing them with legal guardianship and humanitarian aid.”

Last week, 52 MPs from KO criticised Budka’s leadership and demanded a debate about the situation inside the party and a change in the leadership model.

“My party was characterised by a lack of a strategy,” Thun said. “This vote was strictly European. It affected millions of citizens across the EU. If Poland does not ratify this consent, no-one in Europe will benefit from these measures,” she said.

“The left acted stupidly that it went to negotiate with the prime minister on its own and received promises that PiS will not keep anyway. There was no common strategy,” she said.

The MEP was also asked about the recent expulsion of MPs Ireneusz Ras and Paweł Zalewski from PO. “I don’t know what is happening in the party,” she replied.

Former PO boss Grzegorz Schetyna has suggested the need for Budka to step down. Schetyna does not reportedly want to run for the leadership himself, however, and his supporters have mentioned Joanna Kluzik-Rostkowska, a former education minister, or Radosław Sikorski, a former foreign minister, as potential successors.

Rafał Trzaskowski, the mayor of Warsaw and deputy head of PO, is meanwhile building up his Wspólna Polska movement. Trzaskowski reportedly does not intend to run for the party leadership, but might be waiting for the right moment to announce the creation of a new centre-left political force.

Others meanwhile have criticised PO for “turning to the left” and have started talks with ex-president, Bronisław Komorowski, and the People’s Party (PSL) about building a new, Christian Democrat, grouping.