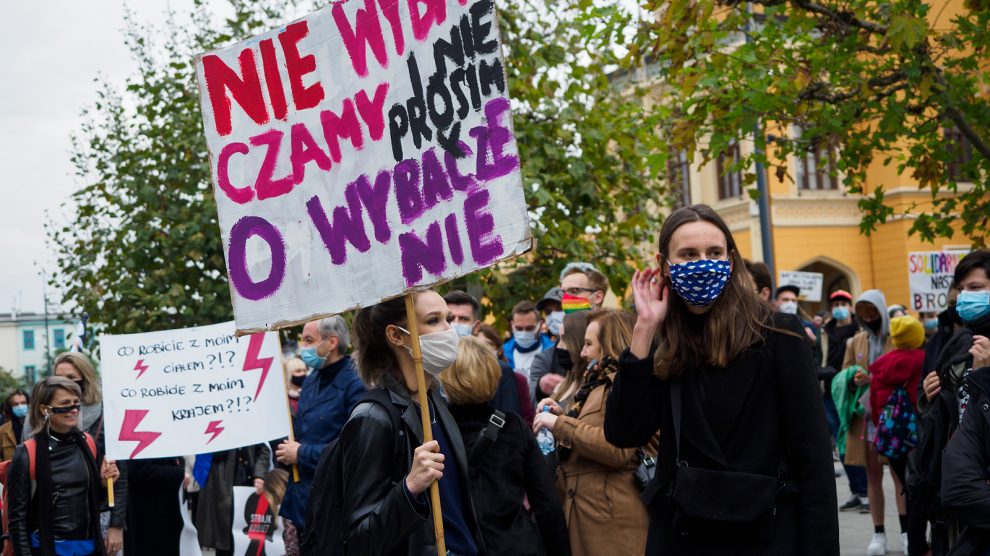 A near-total ban on abortion in Poland has led to an increase in the number of Poles heading across the border to Ukraine.

For several years, private abortion clinics in western Ukraine have seen a steady stream of clients from Poland.

Relatively liberal abortion laws – the procedure can be carried out on demand up to 24 weeks into a pregnancy – in comparison with recently tightened legislation in Poland mean that the number of clients is set to increase.

Since 1993, Poland has had some of the strictest abortion laws in Europe. That year, legislation was passed which outlawed abortion except in three specific cases: if the pregnancy threatens the life of the mother, if the pregnancy was the result of incest or rape, or if the fetus was found to have serious, incurable, irreversible defects.

Often, however, it was difficult for women to get access to abortions even if they met one of the three conditions. Doctors would force women to attend a series of consultations which would take them beyond the 12-week threshold after which abortions were forbidden in all circumstances.

Last year, Poland’s highest court ruled that the provision allowing abortions in the case of severe fetal defects was unconstitutional. When the ruling came into force in January, it meant that women would be forced to see a pregnancy through to completion, even if it were known that the baby would die minutes after birth.

With the vast majority of abortions still being carried out in Poland performed for this reason – in 2019, 98 per cent of the roughly 1,100 legal abortions performed in Poland were a result of fetal defects – the ruling essentially outlawed abortion, except in the most extreme cases.

As with other countries which have outlawed abortion in the past, or continue to do so, the law has not ended abortion.

“Whoever feels they need to get an abortion will still get one,” says Oksana Pokalchuk, a Ukrainian womens’ rights activist.

“Prohibition or restriction only pushes abortion underground. And this is often more detrimental to the health of women.”

Indeed, the law has fuelled both an underground abortion industry in Poland – where there are no guarantees regarding the safety of the procedure – and what has become known as abortion tourism. Polish womens’ rights NGOs estimate that the number of illegal abortions within Poland exceeds legal abortions by many times.

While the more well-off travel to get abortions in other EU countries – many German and Austrian abortion clinics have entire Polish-speaking departments to service this demand – Ukraine is by far the most affordable destination.

“They come here because the prices for medical procedures are much cheaper than in Poland or any EU country, and standards are close to or on the same level as in the EU,” says Tatyana Hrushevskaya, a midwife and gynaecologist.

While official statistics for the exact number of Polish women coming to Ukraine for abortions are impossible to find – private clinics keep this information confidential and Polish women do not declare abortion as their reason for travel when leaving the country – according to Hrushevskaya, Poles are undoubtedly a major demographic among visitors to reproductive clinics.

For now, Ukraine’s liberal abortion laws seem to be safe from amendment. In 2013, representatives of the far-right Svoboda party tried to pass a bill restricting abortion to the same three broad cases as previously allowed in Poland. However, this was quickly shot down by parliament. In 2018, independent MP Dmitri Golubov attempted to pass similar legislation, triggering protests from womens’ rights groups.

According to Oksana Pokalchuk, Ukrainian society is more secularised than in Poland and anti-abortion movements have significantly less institutional backing or societal support.

“Apart from some fringe religious organisations and far-right groups, abortion fortunately has widespread social acceptance here because it has been practiced for a long time. Because of this, I don’t think we will see any restrictions in Ukraine in the near future.”

According to Ukraine’s Ministry of Health, in 2019, there were just under 75,000 abortions performed in Ukraine.

With Poland unlikely to change its highly restrictive abortion laws anytime soon – despite the strength of pro-choice movements such as All-Poland Women’s Strike, whose leader Marta Lempart won this year’s Emerging Europe Democracy, Human Rights and Rule of Law Initiative of the Year award – more and more Polish women are likely to make the journey across the border.