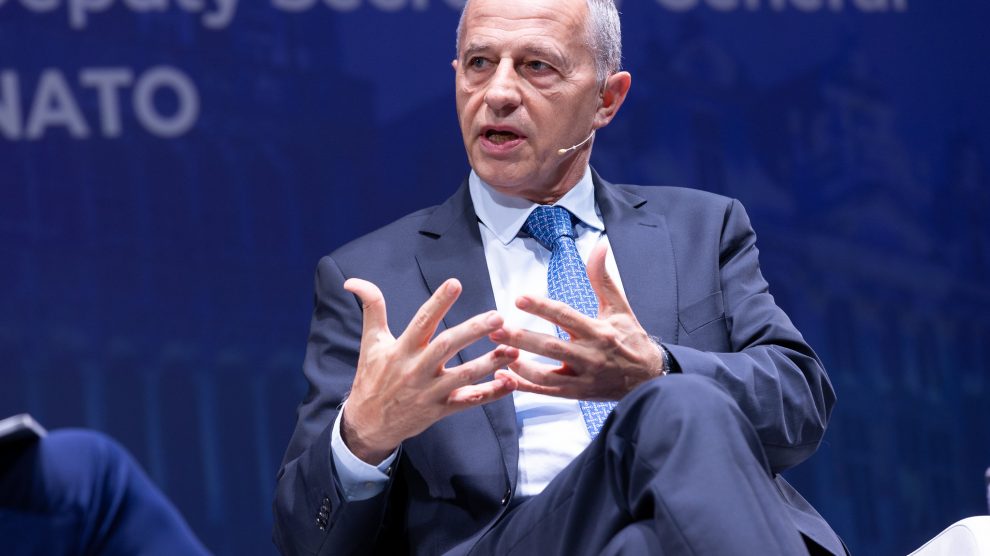 The transformation of post-communist societies was “turbo-charged” by the prospect of NATO and EU membership, says NATO Deputy General Secretary Mircea Geoană. And now they are playing a vital role in the region’s security.

The Deputy General Secretary of NATO Mircea Geoană, confirmed last week that his mandate had been extended until October 2023 by the organisation’s general secretary, Jens Stoltenberg.

“It’s a great honour, but also a challenge,” says Geoană, a Romanian who took up his post in 2019.

“These have been two intense years, and I look forward to contributing to the negotiation, adoption, and implementation of NATO’s new strategic concept, and the NATO 2030 agenda.”

“We are entering one of the most complex moments in modern history,” he says.

“There is a combination of factors, including renewed great power competition, transformations in politics, economy, technology and culture, and this means that we at NATO, an organisation responsible for the security of more than one billion people, must be ready to adapt to the complexity of that challenge.”

The countries of emerging Europe will be a key part of that.

“The newer members of NATO bring an enhanced sense of geography and history, and a fresh energy to make up for lost time,” he says.

“This energy is highly appreciated throughout NATO.”

According to Geoană, there is a link between peace, prosperity and security.

“You can’t enjoy a high standard of living without security,” he said, “and NATO – in partnership with the EU – is the foundation on which everything is built.”

Geoană says that for states in transition the opportunities offered by NATO, and EU, membership, are the most “impressive, transformative incentives for changing society”.

“Transformation of post-communist societies was turbo-charged by the prospect of NATO and EU membership,” he says. “And of course, there are still disagreements between some member states, who have their own national interests that reflect their own geographies; that’s normal. But history will show the integration of [emerging Europe] in transatlantic structures and its reintegration with the rest of Europe as one of the most successful transformations ever. And that’s no small feat.”

“And when it comes to the issue of defending each other, at that moment we see unity, as we did after 9/11. We should not overplay the idea that sometimes we are not always on the same page, because when it really matters, we are.”

And this applies to eastern partners too, he believes, such as Ukraine and Georgia, both of which are keen to join NATO, and – eventually – the EU.

“We will never accept the illegal, immoral occupation of Crimea,” Geoană says. “We have enhanced our presence in the Black Sea, assisting our partners in Georgia and Ukraine. Our deterrence and defence is solid.”

“But as we condemn Russia’s aggressive stance, we still encourage Russia to return to dialogue. We are ready to engage, because there are things we need to do together as an international community.”

Geoană adds that Russia is not only a threat to NATO’s East, South and North, but also poses an ever-increasing cyber threat. As such, the alliance’s NATO 2030 strategic concept will ensure that while traditional deterrence and defence remains solid and credible, while also covering a much broader definition of security.

“At the Warsaw summit in 2016, showing great foresight, NATO leaders decided that cyber would become the fourth NATO domain, after land, sea and air. At the 2019 summit a fifth domain was added: space.”

Another is resilience, which has been highlighted by the Covid-19 pandemic.

“Societal resilience no longer refers merely to defence, or intelligence: it also means recovery from a massive shock, such as a pandemic,” Geoană believes.

Emerging Europe’s role in these new domains is vital.

Geoană says that he is “proud” that so many NATO centres of excellence are now based in the region: cybersecurity in Tallinn, Estonia; human emergencies in Budapest, Hungary; resilience in Bucharest, Romania.

“Because of our history we have an extra sharp radar for sensing danger. It’s part of our historical memory,” he says.

“We have moved our focus from government to society, to business, citizens, media, civil society. This is what we are working on right now. My advice to all governments is not to believe that they can do it alone. Even a competent government can’t do it all: try to engage with citizens.

NATO has never been more important

Geoană says that the constant quest to create a better society is the strength of democratic societies in their competition with more authoritarian players.

“The model based on democracy and free markets is not static, it moves forward. When citizens are engaged in the conversation it is only a matter of time before we learn to do things better.”

Geoană concludes by saying that NATO has never been more important, and that even as the pace of transformation continues to intensify there will be still be a need for defence, national security and collaboration.

“The need for democratic nations from all over the world to come together and defend our values will also be just as relevant, and those newer members – from the emerging Europe region – will be even more influential.

“The region should feel secure. We should all feel secure. NATO is an indispensable precondition for peace, prosperity and decent lives.”

You can watch the full discussion with Mircea Geoană – in conversation with Emerging Europe’s Andrew Wrobel – here.