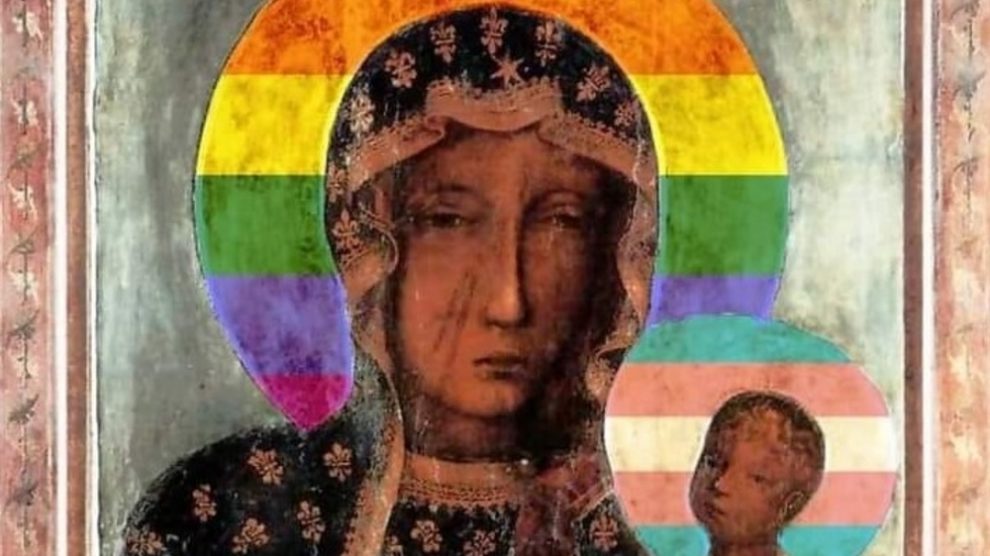 Amnesty International has welcomed the acquittal of three LGBT+ activists who drew attention to homophobia in Poland by pasting images of the Virgin Mary with a rainbow halo across the town of Płock.

Three Polish human rights activists have been acquitted of charges of “offending religious feelings by insulting an object of religious worship” by a court in the town of Płock.

The case had long been viewed as a test of Poland’s commitment to the protection of free speech.

In April 2019, Elżbieta Podleśna and two other activists – Anna Prus and Joanna Gzyra – put up images of the Virgin Mary with a rainbow halo in protest at what they called the “exclusion of LGBT+ people from society” by the country’s Catholic church.

The images were placed around Płock in reaction to an Easter display which featured slogans about crimes or sins. Listed among the sins were “gender” and “LGBT”.

At the time, the Jasna Gora Monastery in southern Poland, where the image of the Black Madonna of Częstochowa — the one was used in the activists’ picture — is kept, said that the altered images had caused “great pain”.

Poland’s then interior minister, Joachim Brudziński, wrote: “All that nonsense about freedom and ‘tolerance’ does not give anyone the right to insult the feelings of the faithful”.

The Polish authorities had alleged that the images were “offensive”, accusing the three of “publicly insulting an object of religious worship in the form of this image which offended the religious feelings of others”.

The Polish authorities arrested and detained Podleśna in 2019 after she embarked on a trip abroad with Amnesty.

The authorities opened an initial investigation against her in May 2019, and in July last year they charged all three activists, under Article 196 of Poland’s criminal code, which gives the authorities broad powers to prosecute and criminalise individuals.

“The activists’ actions were provocative, but aimed at drawing attention to the homophobic and harmful decor in the church in Płock,” said the presiding judge. “The accused did it to show that such actions were unacceptable. It was not the intention of the activists to insult anyone’s religious feelings or to insult the image of the Mother of God.”

‘Charges should never have been brought’

Amnesty International has welcomed the acquittal, but suggests that the case should never have been brought to court.

“The charges should never have been brought against these women and it’s absolutely the right decision that they have been acquitted,” said Catrinel Motoc, senior campaigner in Amnesty International’s Europe office.

“They had risked up to two years in prison simply for standing up for LGBTI rights in a climate of hate and discrimination in Poland.

“Targeting activists with such absurd and unfounded charges is part of a much wider pattern of harassment and intimidation of human rights activists across Poland.

Last November, Amnesty’s Campaign Against Homophobia, Freemuse, Front Line Defenders, Human Rights Watch and ILGA-Europe sent a joint public statement urging the Poland’s prosecutor general to drop the charges and ensure that the three women were allowed to carry out their human rights work without harassment or reprisals.

Authoritarians emboldened by weak international response to events in Belarus
What can the experience of East Germany teach other former communist countries?
Comment