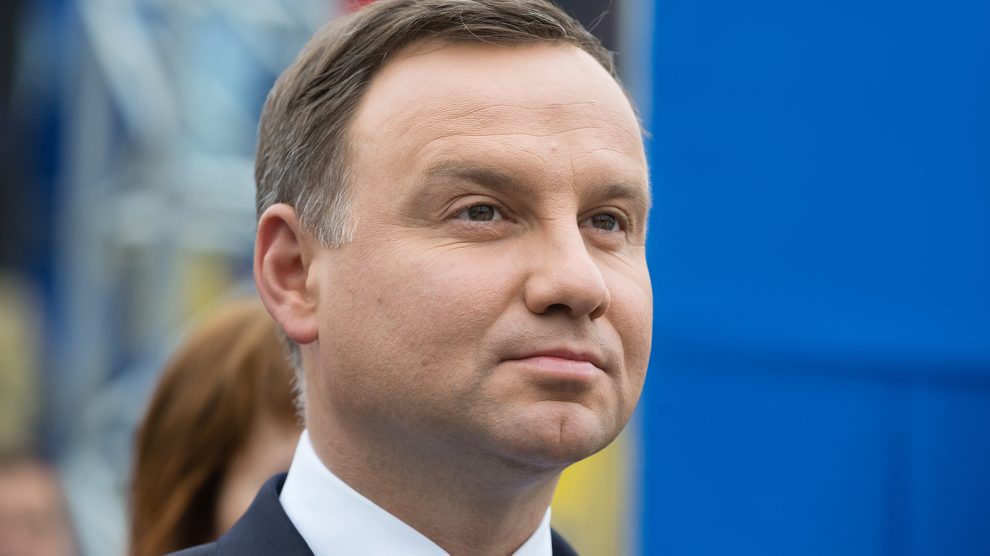 A writer in Poland faces a possible prison sentence for insulting the country’s president.

Polish writer and journalist Jakub Żulczyk, who faces up to three years in prison for calling President Andrzej Duda a “moron” in a Facebook post last November, has become the latest cause célèbre in Poland’s increasingly bitter culture wars.

“I am, I suspect, the first writer in this country in a very long time to be tried for what he wrote,” says Żulczyk.

Duda is supported by the right-wing Law and Justice (PiS) party, which since coming to power in 2015 has stiffened laws forbidding the insult of state leaders and religion.

The country now has nine different insult laws, including one that covers state symbols, and all come with potential prison terms.

PiS has also made what it deems anti-Polish statements regarding the Holocaust punishable by law. Just last month, two Polish historians, Professor Barbara Engelking, chair of Poland’s International Auschwitz Council, and Professor Jan Grabowski from the University of Ottawa, were ordered by a Warsaw court to apologise to the niece of a World War II-era Polish mayor whom they reported in their book, Night Without End: The Fate of Jews in Selected Counties of Occupied Poland, was complicit in the killing of Jews.

The work, published in Polish, documented cases of complicity of Catholic Poles during the Holocaust.

The latest furore revolves around a Facebook post made by Mr Żulczyk November 7, 2020, in which he said that Duda had failed to understand the US electoral process in his congratulatory tweet to Joe Biden.

Duda wrote: “As we await the nomination by the Electoral College, Poland is determined to upkeep high-level and high-quality PL-US strategic partnership for an even stronger alliance.”

In response, Żulczyk wrote that he had “never heard of such a thing as Electoral College nomination. Joe Biden is the 46th president of the USA”, adding: “Andrzej Duda is a moron”.

“The defendant was accused of committing an act of public insult on November 7 last year on the social network of the President of the Republic of Poland, by using the term commonly considered offensive.”

Duda has scrambled to distance himself from the row. A spokesperson, Błażej Spychalski, told Interia, a news portal, that “neither the president nor the President’s Office are parties to this matter.”

He added that Duda does not know Jakub Żulczyk personally, but called for mutual respect.

Let he who is without sin…

Nevertheless, other cases which involve insulting the president are also surfacing.

For example, three teenagers who last year recorded themselves trying to set fire to a poster with an image of Duda, and shouting offensive slogans at him, have been brought to court and also face up to three years in prison for insulting the president.

According to the newspaper Rzeczpospolita, the event took place in June 2020 in Sulmierzyce (Greater Poland). The students met at an event organised to celebrate the end of the school year.

And just this week, a woman known only as Wiktoria K. was found guilty of insulting the president, although on account of her age (she is 20) and clean criminal record, she was given a conditional discharge and will not face sentencing.

Ironically, in 2012, Duda – at the time an MP – criticised the sentencing of Robert Frycz, the creator of a satirical website, antykomor.pl, for insulting then president Bronisław Komorowski.

Mr Frycz was sentenced to 15 months of “restricted liberty” (a form of house arrest) and 40 hours of community service, something that Duda termed “ridiculous”.