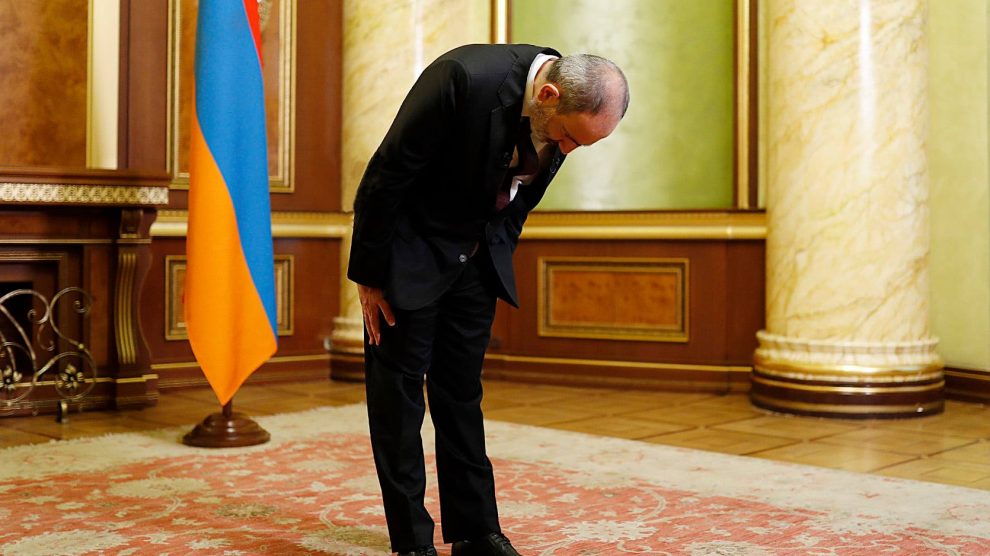 The dismissal of Armenia’s Chief of Staff, Colonel-General Onik Gasparyan, has exacerbated a political crisis in the country.

Following Armenia’s defeat in the latest conflict in the disputed region of Nagorno-Karabakh last autumn, Pashinyan has faced a severe backlash from both the military and the general population for mishandling the conflict and leaving the armed forces unprepared.

In statement issued shortly after his dismissal, Gasparyan said, “the whole process of [my] dismissal is unconstitutional, which once again confirms that a solution to the current crisis, meeting the interests of the country, can only be ensured by the resignation of the prime minister and early parliamentary elections.”

He went on to promise to challenge the grounds for his dismissal in Armenia’s administrative court.

Protesters since have been attempting to block the entrance to the country’s parliament and ministry of foreign affairs.

After coming to power riding a wave of optimism following 2018’s Velvet Revolution, Pashinyan’s administration has since faced severe criticism for failing to adequately prepare the Armenian armed forces for conflict with Azerbaijan. One decision critics point to is Pashinyan’s choice to reject more modern air defence systems offered by Russia, and instead acquire dozens of second-hand Soviet-era Osa systems from Jordan. These venerable pieces of equipment struggled to cope with advanced combat drones such as those employed by Azerbaijan during the war.

On February 23, in an interview, Pashinyan blamed Russian-made equipment for the defeat in Nagorno-Karabakh. He claimed that only 10 per cent of the Iskander ballistic missiles – acquired from Russia under former prime minister Serzh Sargsyan – exploded successfully when fired.

Despite this, however, the Iskander system was reportedly only used three times during the war. Furthermore, Armenian journalist Tatul Hakobyan has claimed the missiles were “fired in a completely pointless direction, at a time when the outcome of the war was already decided.”

Other sources – such as the Russian Ministry of Defense – claim that Iskander missiles weren’t used at all during the war.

Although Pashinyan’s administration backtracked on the comments about the Iskander system, the damage had already been done.

On February 24, Deputy Chief of Staff Tiran Khachatryan reportedly laughed when asked about the prime minister’s comments on the Iskander system, saying that they were “frivolous”. He was dismissed within hours.

The following day, 40 high-ranking Armenian military staff signed a letter demanding that Pashinyan’s government resign for “for having brought the country to disaster”.

Among the signatories were Tiran Khachatryan and Onik Gasparyan. Protesters began blocking part of Baghramyan Avenue in Yerevan, where parliament is located, and have remained since.

Pashinyan branded the letter as an “attempted coup d’etat”. He immediately made moves to dismiss Gasparyan from his post, but President Armen Sarkissian twice refused to approve the dismissal. However, the second time, the president took no action to prevent the decree from automatically coming into force on March 10. Sarkissian has since referred the matter to the constitutional court for review.

Gasparyan was replaced by Artak Davtian, who had previously been in the post from May 2018 to June 2020, when he was fired for violating Covid-19 containment protocols.

Protests continue in Armenia and Pashinyan appears to be losing goodwill fast. Nearly three years on from the Velvet Revolution, reality appears to be setting in. The western countries to which the Pashinyan administration had been making overtures towards stood by silently during the war. Russia, alienated by the same government, did little to protect its ally – perhaps in punishment for its recent westward turn.

Now, Pashinyan is lashing out. His dismissal of internal critics dashes hopes that he would be a liberalising pro-western reformer while the disastrous defeat in Nagorno-Karabakh called his competency into question.

For now, the political crisis looks set to continue.

Polish Greens demand better, not bigger state to tackle climate change
Around the world in a day, in Ljubljana: Elsewhere in emerging Europe
Comment