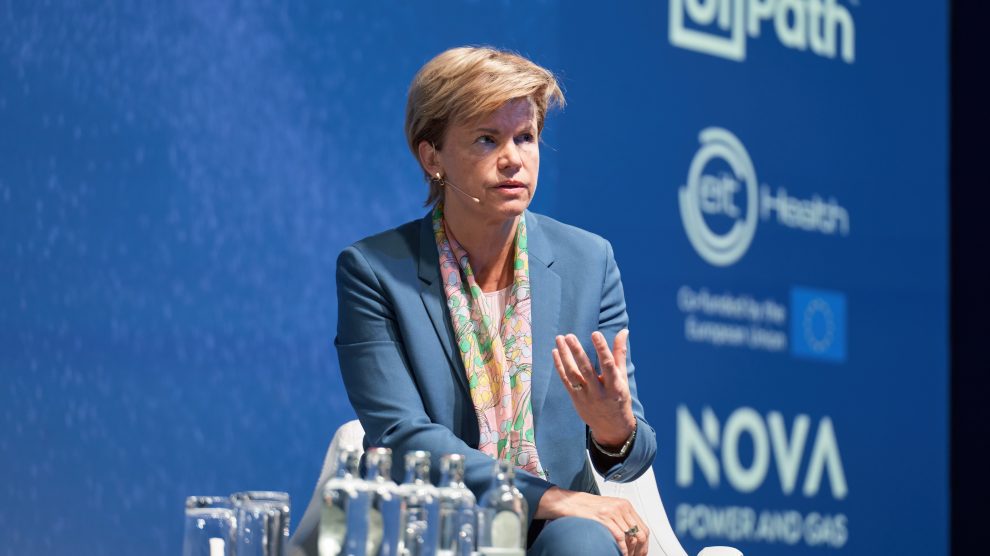 NATO’s response to Russia’s invasion of Ukraine has been excellent. The alliance has found new strength and unison in its messaging, for which much of the credit must go to Baibe Braže (pictured above), its Latvian assistant secretary general for public diplomacy.

If fear of NATO enlargement was truly one of Russian dictator Vladimir Putin’s reasons for launching his war on Ukraine, then it is ironic that a direct result has been precisely what he was afraid of.

Finland and Sweden, hitherto staunchly neutral states, both signed articles of accession with the alliance on July 5, and will become full NATO members at some stage over the next 12 months. Sir Malcolm Rifkind, a former UK foreign secretary, has called this ironic outcome, “yet another example of Putin’s strategic genius”.

But the consequences of the war in Ukraine for NATO go far beyond enlargement. It has highlighted the need for the alliance to be prepared, for the first time in years, for the very real threat of a member state coming under military attack, while underlining the importance of its resilience in the face of hybrid warfare: cyber-attacks, propaganda, false news.

Its response has been excellent. The alliance has found new strength and unison in its messaging, for which much of the credit must go to Baibe Braže, its Latvian assistant secretary general for public diplomacy.

Braže was appointed to the role in May 2020. The public diplomacy division she heads works to raise the alliance’s profile with audiences worldwide and to build support for alliance operations and policies.

In discussion with Emerging Europe’s Andrew Wrobel at the recent Emerging Europe Summit and Awards, held in Brussels, Braže was keen to put across the idea that fighting these hybrid threats, and building resilience, is not a matter for NATO, or individual governments alone.

“Resilience means making sure that societies and countries are able to recover or prevent crisis and shocks, and for that there has to be a whole-society approach,” she says.

“The private sector, non-governmental actors, various social organisations, media and academia all need to be involved. They are all necessary in order to achieve concrete objectives.”

“I deeply admire the way Ukraine prepared for this attack,” Braže confesses. “The readiness that it had, the ability to pull in the private sector, civil society – it is the embodiment of resilience. Not only the ability to fight a war of resistance and liberation but to have that will to fight and to have the support of the whole of society.”

According to the European Union’s External Action Service (EEAS), ever since its illegal annexation of the Crimean peninsula in 2014, Russia has waged a sustained and coordinated state-controlled disinformation campaign targeting the Russian population, Russia’s neighbour countries, and the rest of the world, aimed in particular at influencing public opinion.

The lengths to which Russia will go was highlighted in early July when the Bulgarian secret services announced that they data showing that Russia pays about 2,000 euros per month to public figures, journalists, and politicians to spread its propaganda in the country.

Braže says that when it comes to disinformation and propaganda, the first and most important step is to define and understand them.

“Propaganda is essentially when a hostile actor, which can be state, a state-enabled actor, has the intent to achieve certain objectives. In the case of Russia, these hostile campaigns are indeed part of its political and military objectives.

“In the case of disinformation, we regard as malicious or untruthful information that can be spread by various actors but that there may not necessarily be hostile intent. Misinformation can be manifestly untruthful. Often, people are not even aware that they are spreading misinformation.”

Taking advantage of what Braže calls “war fatigue” is one of the ways that hostile actors are currently looking to manipulate public opinion.

As appears to be the case in Bulgaria, she warns that, “influencers are being used in our countries to spread and question everything our governments are doing.” In this climate, “it is much more difficult for societies and governments to maintain the same level of motivation and mobilisation,” she adds.

Although Braže spoke to Emerging Europe a few days before NATO’s Madrid summit – at which Finland and Sweden were formally given the green light to join – it was already clear that the summit would be the alliance’s most important for some time.

It concluded with far-reaching decisions to transform NATO, with the alliance’s secretary general, Jens Stoltenberg, saying: “The decisions we have taken in Madrid will ensure that our alliance continues to preserve peace, prevent conflict, and protect our people and our values. Europe and North America, standing together in NATO.”

The summit endorsed a new NATO strategic concept, the blueprint for the alliance in a more dangerous and competitive world. It sets out NATO’s approach not only to Russia and to other threats, including terrorism, cyber and hybrid. For the first time, the strategic concept addresses the challenges posed by China.

Leaders also agreed on steps to fight climate change, including targets to cut NATO’s own greenhouse gas emissions and move towards Net Zero by 2050. A new NATO Innovation Fund, which will help the alliance sharpen its technological edge, was also launched at the Summit. Allies also recommitted to the fight against terrorism, and addressed NATO’s response to threats and challenges from the Middle East, North Africa and Sahel.

The concept also includes a commitment to preventing violence against civilians, including conflict-related sexual violence, as well as attacks against cultural property and environmental damage. These contributes to forced displacement, fuelling human trafficking and irregular migration, trends which pose serious transnational and humanitarian challenges and which undermine human and state security and have a disproportionate impact on women, children and minority groups.

For Braže, who now has to sell it to the public, the new strategic concept is recognition that NATO is “indispensable” to human security.

“It guarantees our peace, freedom and prosperity. As allies, we will continue to stand together to defend our security, values, and democratic way of life.”

Baibe Braže spoke with Andrew Wrobel at the recent Future of Emerging Europe Summit and Awards. You can watch the full discussion below.