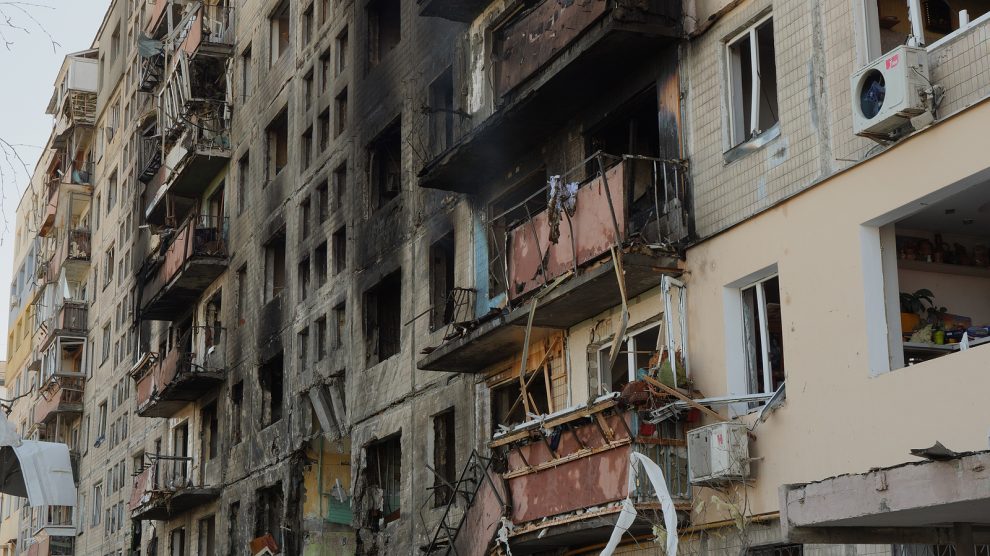 It is hard to describe the excruciatingly painful destruction Vladimir Putin is inflicting on Ukraine. However, whereas NATO should provide Ukraine with active defensive military equipment, it should not directly join the war which could ignite a major European if not world war.

There are growing voices from academia, the military, and former and current US and EU officials calling on the Joe Biden administration to heed Ukrainian President Zelensky’s appeal to impose a no-fly zone over Ukraine.

Beyond a no-fly zone, they raise a legitimate question — do the US and its allies have a limit as to how far and for how long Russia’s President Vladimir Putin can indiscriminately bombard Ukrainian cities, killing thousands of innocent men, women, and children, before NATO intervenes to end the slaughter?

Indeed, everyone with a conscience feels the horror of this unprovoked and utterly unjustified war. However, if we want to prevent an all-out war in Europe, we have to be extraordinarily prudent and not allow our sense of outrage about the war succumb to our compassion and moral obligation, albeit it should be the right thing to do.

There are many reasons why we should not confront Russia directly, especially now that we are taking many non-military measures, including crippling sanctions, while remaining united and resolved to indirectly inflict heavy military losses on Russia and render it a pariah state.

In addition, once they become aware of the unspeakable horror Putin is inflicting on the people and cities of a peaceful neighbour, the Russian people would rise against their corrupt and brutal leader who is misleading them and subjecting them to nothing but more pain and misery.

Why NATO should not get directly involved

Here are several reasons why NATO should not get directly involved in this horrific war and what it must do to inflict indirectly the heaviest toll on the Russian army while exposing Putin as a war criminal.

First, introducing a no-fly zone would pit NATO directly against Russia, as it will require an extensive campaign against Russian jet fighter planes, as well as destroying Russia’s S-300 and S-400 air defence systems, which Russia would certainly use to intercept NATO missiles enforcing a no-fly zone. This move would escalate and draw NATO into a broader war.

Second, at the present the Russian people are demonstrating in growing numbers against the war as the public is becoming increasingly informed, with nearly 5,000 arrested at protests. However, if NATO intervenes and expands beyond Ukraine’s borders, and NATO begins to attack numerous targets inside Russia, it would doubtless galvanise Russians against Western powers, when in fact the precise opposite is what the NATO alliance wants to realise.

The threat to Europe’s non-NATO members

Third, several European countries who are not NATO members, especially Sweden and Finland, do not want NATO to go to war with Russia, fearing that they would eventually be dragged into it without having NATO’s protection, such as the case with Ukraine. They prefer to see Putin suffer from the consequences of his ill-fated misadventure.

Fourth, while most military analysts agree that Russia will lose any conventional war against NATO, given Russia’s history and imperial mindset, losing a conventional war against NATO will be a recipe for the next war between them. This would destabilise Europe for decades, which should be avoided unless Russia attacks any NATO member state first.

Fifth, by avoiding direct military involvement, NATO will spare the lives of tens if not hundreds of thousands of soldiers and civilians on both sides. And so long as the West continues to supply Ukraine with military equipment while Russia is sustaining crippling sanction and heavy military losses, NATO should continue with this strategy which may precipitate a coup inside Russia itself.

Sixth, a direct confrontation with Russia could deliberately or accidentally escalate and engulf many countries beyond the European theatre. This will essentially put us at the precipice of World War III. This must be avoided by any means possible unless Russia attacks first and leaves the West with no choice other than waging an all-out war against Russia.

Seventh, prior to escalating the conflict with Russia, NATO must consider where China stands. As Putin’s atrocities are exposed, the Chinese may well heed the US’ call to play a constructive role by using its influence on Putin to end the war without further catastrophic losses. Given however the closeness between Putin and President Xi Jinping, the latter would not do so if NATO engages Russia militarily.

Eighth, given that Russia’s conventional weapons are still limited and considerably inferior to the combined forces of NATO, and given Russia’s considerable losses, Putin may resort out of desperation to using tactical nuclear weapons which is the mother of all catastrophes. This is the worst of all possible scenarios. The US and its allies must spare no effort to prevent it.

Finally, regardless of how distasteful it would seem to make any concession to Putin to end the conflict, we need to weigh the consequences of a prolonged war on the Ukrainian people. To avoid that, it will be necessary to offer Putin a face-saving way out, bearing in mind that there are no other realistic alternatives.

This may include Ukraine becoming a neutral country and committing not to join NATO, to which President Zelensky has already conceded. And instead of recognising the independence of Donetsk and Luhansk, as Putin is demanding, Zelensky could offer to declare these two provinces semi-autonomous and also agree to acknowledge Russia’s sovereignty over Crimea, which in any case Russia is unlikely to ever relinquish. An agreement along these lines would make Ukraine a buffer zone between East and West as long as its independence, national security, and territorial integrity are guaranteed by both Russia and the US.

This general framework for a solution is neither fair nor morally correct, but it must be weighed against the potential continuing massive destruction and loss of lives in the tens, if not hundreds, of thousands. Moreover, the prolongation of the war could escalate and pit NATO against Russia with the potential of introducing weapons of mass destruction, which will be catastrophic and of unprecedented scale and must be avoided at any cost.

Any war, regardless of causes and circumstances, is tragic. Though the Ukrainians have and continue to suffer unimaginably, the big loser is Russia and Putin in particular. The Russian people, who are acutely suffering from the sanctions, will sooner than later find out the scale of destruction and death that Putin has inflicted on a peaceful neighbour, which many Russians believe to be historically, culturally, and linguistically part of Russia. It is incomprehensible to many how their leader, who has been invoking this affinity to Ukraine, would wage such merciless war against innocent men, women, and children, and decimate their cities to a degree unseen since World War II. Putin knows that; he is boxed in and desperately needs a way out.

Putin will be watching carefully what comes out of the summit between NATO heads of states. The message Putin should receive must be unequivocal, clear, and absolutely credible. He should be warned that NATO’s response to the use of any kind of weapons of mass destruction will be quick, decisive, and painful, which would render Russia a bankrupt, pariah, and failed state, and he will personally be charged with war crimes.

Putin will be remembered as the Russian despot who not only failed to restore his pipe dream of the Russian Empire but savagely destroyed Russia’s international standing, from which it will take decades to recover.

The West must learn a cogent lesson from this gruesome war and remain united, vigilant, militarily prepared, and become energy independent from Russia. They should know that the Russian bear will still be lurking in the dark for years if not decades to come, but will dare not threaten the West knowing that only a humiliating and costly defeat will await him.

Football has banned Russia from competitions, but more can be done
Ukraine should prepare to be disappointed
Comment