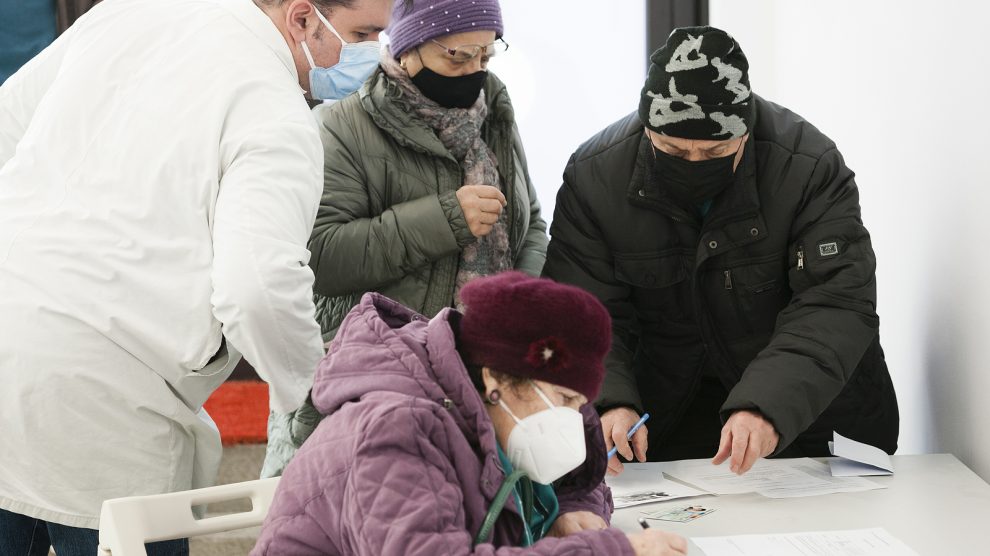 Record numbers of deaths and tight new restrictions finally appear to have convinced one of Europe’s most vaccine sceptic countries, Romania, to get jabbed.

There have been long queues at Covid-19 vaccination centres in Romania over the past few days, as much of the country’s hitherto vaccine-sceptic population finally appears to have overcome its fears or objections to getting the jab.

More than half a million people received their first dose of a vaccine over the past week, by far the highest number since Romania began its vaccination campaign back in January.

Almost 100,000 people are now being jabbed daily in Romania, meaning that the country – which currently has the EU’s second lowest number of vaccinated people, around 30 per cent, behind only Bulgaria – could reach the bloc-wide target of 70 per cent vaccine coverage by the end of the year should the current trend continue.

While new restrictions which came into force on October 25, barring those without a so-called green pass from almost all public spaces, including shopping malls, cinemas, cafes and restaurants, have spurred many to get the jab, it was the sheer number of deaths in the country from Covid-19 (more than 3,000 over the past seven days) that was cited by those in the queue at a vaccination centre at Park Lake, a shopping centre in the east of the capital Bucharest, as the reason for their decision to get jabbed.

“I was never an anti-vaxxer, I just thought I would never need to get the vaccine,” says Mihaela Irimia, who works for a travel agency. “I thought [the virus] would go away. In the summer I thought it had. I was wrong.”

For another Romanian in the queue, Andrei, who asked that his surname be withheld, it was fear of ending up in hospital that made him overcome his initial scepticism.

“I still think the restrictions are wrong, I still think that it’s unfair the vaccinated can go to places that the unvaccinated can’t, but some of the footage I have seen from hospitals, of people being given oxygen with hand pumps, made me realise that I do not want to become a victim of a health system that can’t look after us,” he says.

Anti-vaccination sentiment in the country certainly appears to have subsided. Just a few hundred people protested against the vaccinations and the new restrictions at a rally in Bucharest on October 24. Two weeks earlier several thousand had taken to the streets. Legislation currently being debated in parliament could tighten restrictions further by mandating all public sector workers to get the vaccine or pay for regular tests. Schools have been closed until at least November 8.

With just a few new infections and only a handful of deaths each day, Romania’s government relaxed almost all Covid-19 restrictions at the end of May, but the move was criticised by health bosses at the time as being premature.

A new surge in cases which began in September has seen both case numbers and deaths soar to record highs, placing great strain on the country’s creaking health service.

Last week, Romania began moving some Covid-19 patients to hospitals in Hungary and Poland, having appealed to its European partners for assistance after it ran out of beds in intensive care facilities. Poland has also sent medical teams to Romania.

But like several other countries in Central and Eastern Europe, Poland itself is facing a worrying surge in case numbers.

“If, at the end of October, we are at an average level of over 7,000 cases per day, we will have to consider taking some more restrictive steps,” said Health Minister Adam Niedzielski on October 25. “Decisions will be made at the beginning of November.”

Poland recorded 6,265 new cases of Covid-19 on October 26, the highest number since April.

However, the minister added that Poland – which has vaccinated around 51 per cent of its population – was unlikely to see a new lockdown, such as that introduced in Latvia last week after the country recorded more than 3,000 new cases in one day for the first time since the pandemic began.

Only essential businesses such as pharmacies and food stores will be permitted to open in the Baltic country until November 15.

Announcing the new lockdown, Prime Minister Krišjānis Kariņš renewed his call for Latvians to get vaccinated.

“I must call on all vaccinated people to be prepared to bear the burden, which I know is unfair,” he said. “We need to do so because other people are unvaccinated. If we do not bear this burden, everyone will suffer.”

“When the lockdown ends we will continue to impose very heavy restrictions on those members of the public who haven’t vaccinated. In fact, they will have to keep sitting at home in one way or another until they are vaccinated so that the whole society can finally get rid of this problem.”

Around 54 per cent of Latvian adults have so far been fully vaccinated.

Bulgaria may have to reintroduce lockdown

In the European Union’s least-vaccinated country, Bulgaria, restrictions similar to those in Romania and rising numbers of death have so far had little impact on vaccine numbers: fewer than 10,000 people are being vaccinated each day.

Only around 25 per cent of Bulgarian adults are fully vaccinated, with health officials blaming public mistrust in vaccines and the country’s caretaker government.

The country’s hotel and restaurant association is planning a protest against the restrictions in the capital Sofia on October 27, claiming that they are discriminatory.

According to data from Johns Hopkins University, Bulgaria has the world’s highest Covid-19 mortality rate: 330.7 deaths per 100,000 people. Of those, 94 per cent were unvaccinated people.

Health Minister Stoycho Katsarov told a press conference last week that is the current measures do not work, “the only option left will be the imposition of a nationwide lockdown”.