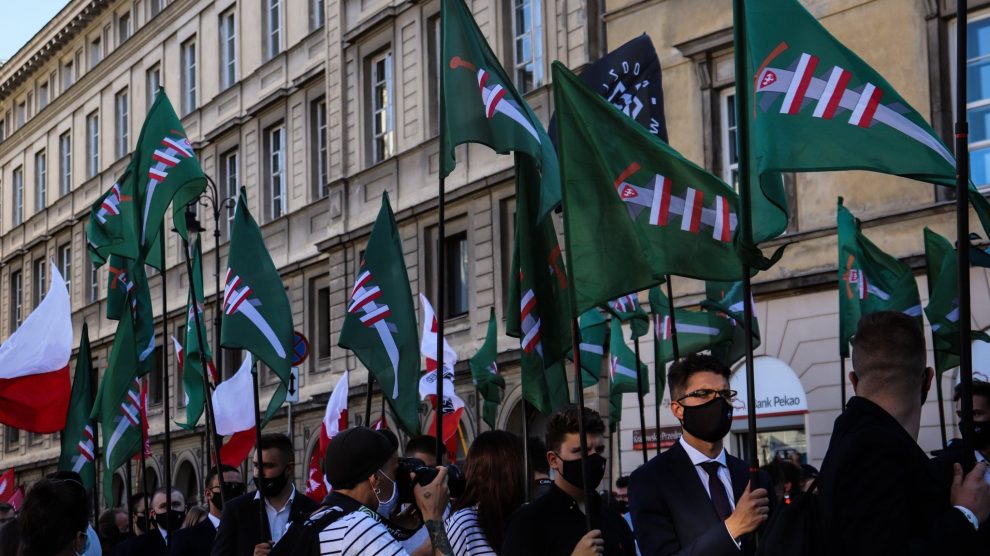 Poland’s ruling party Law and Justice often gets portrayed as being ‘far-right’, and not without reason. The fact is, however, that another party already occupies that space of Polish politics, and support for it is increasing.

The Polish party Konfederacja Wolność i Niepodległość (usually shortened to just Konfederacja – Confederation), won 6.8 per cent of the vote at the country’s parliamentary election in 2019 and currently has 11 MPs.

At a by-election last week in the southeastern city of Rzeszów, the party’s candidate Grzegorz Braun won 9.15 per cent. He had been polling at over 13 per cent. With the ruling Law and Justice (PiS)-led coalition losing support, the far-right may be creeping back into the national picture.

With this in mind, an interview with someone from Confederation was arranged. But, doubts nagged. Is it intrinsically a bad idea to talk with a party that occupies the far-right of a political spectrum that is anyway right-leaning?

Those who believe even talking with such people breaks the rules of democratic society argue that it gives them a public forum they don’t deserve, a voice that should not be heard, that it creates a false equivalence.

Before my interview with Mateusz Marzoch, a spokesperson for the The All-Polish Youth (Młodzież Wszechpolska) – a component of Confederation – I asked people whose judgements in these matters I respect and whose opinions could be of value.

“There’s a difference between explaining and describing an abhorrent worldview and giving it a platform. Talking about and with these people always involves playing with fire, but we’ll never understand the physics of combustion without burning something,” Brian Porter-Szűcs, professor of history at the University of Michigan, said.

“I used to believe that one should not give odious people a chance to disseminate their views. I believe now that people should know what they represent and that we are wrong to try and protect readers/listeners from vile ideas,” said Anita Prazmowska, professor of history at the London School of Economics.

Confederation is made up of two main political forces. One is the National Movement (RN), formed in 2012 and merging far-right fragments such as the National Radical Camp and the All-Polish Youth. The other is KORWIN, led by the politician Janusz Korwin-Mikke, offering a mix of extreme neoliberalism and social conservatism.

The All-Polish Youth was created in 1922 as part of the National Democracy movement, and was modelled after the inter-war fascist movement Falanga. Roman Dmowski was its honorary chairman.

Its modern incarnation was founded in 1989, on the initiative of Roman Giertych, the former leader of the League of Polish Families (LPR). They declare themselves opposed to “doctrines promoting liberalism, tolerance, and relativism” and claim that the “Catholic ethic” should be irrevocable both in public and private spheres of life. The November 11 Independence Day marches in Warsaw have been dominated by the group for several years.

The aim was not on one hand to ridicule or belittle, or on the other hand to create a monster. What use would that do? It’s already been done and, anyway, it doesn’t work, the far-right seems to feed off both.

We start with the ‘accursed soldiers’ and the murders of Belarusians after the end of World War II by Polish soldiers fighting the incursion of the Red Army into Poland.

The argument is not very convincing. Were they killed deliberately because they were communist sympathisers or did they die by accident?

Marzoch comes from a small village 80 kilometers north-east of Warsaw, near Pultusk, which, he says, was very ethnically and religiously mixed before the war.

“There were many Germans, Ukrainians and Jews in my area. My grandfather tells me about the old days, about what the Jews there did for a living, nothing really more than that,” he says drily.

But in the next breath he says “the Jews were rich, the Poles poor.”

But weren’t these “rich Jews” also Poles, I ask? “Yes, but not the ones who collaborated with the communists,” he says. “It’s complicated.”

“We know that many Jews collaborated with the Russians and then after the war collaborated with the communists in Poland. My neighbour recalls how a Jew was saved after being hidden by local Poles [non-Jewish ones]. When he came out of hiding at the end of the war, he told my neighbour – my neighbour recalls – that even if there is one Jew left in Poland, that will still be enough to rule Poland.”

“The Polish nationalist groups helped Jews during the war when they discovered what the Germans were doing to the Jews. It was wrong what the Germans did,” he adds, as if there was any doubt.

“There is no evidence that Poles killed Jews at Jedwabne [the town in northeastern Poland where almost all of the Jewish inhabitants were killed by their gentile neighbours in 1941, as documented by US historian Jan Gross in his book Neighbours]. Many in our community [he doesn’t specific what his ‘community’ means] want to get the archaeologists in and see what really happened. But those that say Poles did it, don’t want to do that.”

Without being asked, Israel suddenly enters the conversation. “If you want the perfect example of a nationalist state, look at Israel,” he says. “There is nothing wrong in that, unless, that is, you keep expanding your borders and killing Palestinians.” I don’t press him on why he cares about Palestinians. He is less sympathetic to Syrians displaced by war coming into Europe, after all.

Asked if he thought Poland was better off without “the Jews”, Marzoch talks of the “great diversity of Poland after 1918, of Jews, Germans and Ukrainians. But they [“the Jews”] started to cause problems and not all Poles [the non-Jewish ones] were happy.”

“But Jews are not a problem today, not a threat. Some people say our premier is a Jew, but I don’t believe that,” he throws in, perhaps a gesture to show relative moderation.

“However, Jews like [Hungarian philanthropist] George Soros spread the LGBT+ ideology via money into NGOs,” he goes on. Asked if it is their Jewishness that determines their actions, Marzoch seems a little baffled, as if the question has never crossed his mind or did and was so absurd as to be immediately uncrossed.

“But we have Jews who are Polish nationalists, we have Muslims also in the association,” he adds quickly.

Asked if religious Jews who are also conservative in their views on LGBT+ and abortion issues can be included as Polish nationalists, Marzoch again appears a little confused.

“Nationalism can cut across religions. But we are a Catholic-Nationalist-Christian group. Polish nationalism has always been a bit different from others in Europe,” he goes on.

I get the feeling there are two narratives running in his head as he speaks, and at this point they collide in a jumble of confusion. “We don’t see ourselves as above anyone,” he adds, with a hint of defensiveness.

We move on to LGBT+ people, or “LGBT+ ideology”, as he calls it. Asked if there was room in his association for gay people, Marzoch laughs.

“I don’t know of anyone in the association who is gay, Catholic and nationalist.” It does and doesn’t answer the question. Could there be gay people who are also anti-immigration and abortion? He agrees there could be.

“We just don’t want them [‘the gays’] to show off in the street,” he says. “We are not stopping anyone doing what they want in their own bedrooms.” So, it’s about the external aspects of identity then, I ask.

“We in my village were not brought up to hate anyone … well, maybe the Russians,” he laughs. It feels like the closest we are going to get to a joke.

The interview is civilised and I end it not disliking Mateusz, but what did I learn?

The points he makes are not very original, after all, and my questions don’t really expose any contradictions other than the obvious ones. The world goes on.

It’s Belarus, not White Russia: Why rebranding a country starts with its name
No immediate progress as Serbia-Kosovo dialogue resumes
Comment