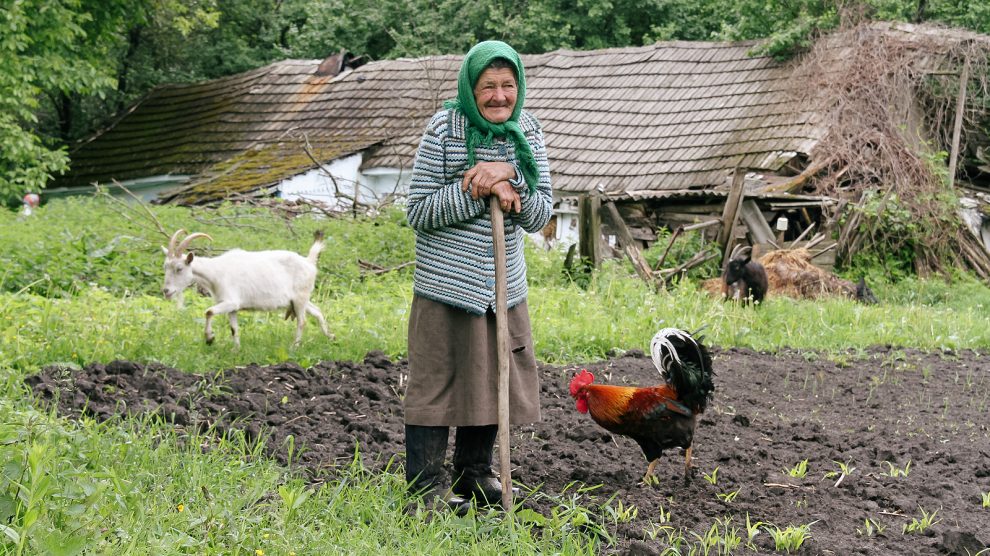 Millions of Ukrainian pensioners are living below the poverty line – and with prices for food products and utilities constantly rising, their situation may yet get worse.

Any regular visitor to Ukraine will be familiar with the sight of elderly people eking out a living as best they can.

Whether selling miscellaneous goods in underpasses and in front of metro stations, serving as apartment building concierges, offering cleaning services or running ubiquitous roadside kiosks, some forms of employment seem to have an average age well above 60.

In the countryside, elderly Ukrainians work small plots of land until well into what should be their retirement in order to grow food.

This is not a coincidence: elder folk are driven to continue working as a result of their pensions often being significantly lower than the cost of living.

While a few can rely on their children to continue supporting them, not all are so fortunate.

The statistics are damning. According to a study conducted by Ukrainian newspaper Liga, approximately 80 per cent of single pensioners live below the poverty line. Vera Chaikovskaya, a professor at the Ukrainian Institute of Gerontology, claims that 90 per cent of pensioners are unable to pay for even basic medical services.

“Of course, the pension is not enough,” says Viktoria, a Georgia-born retiree who has been living in Ukraine for over 40 years. Once a schoolteacher and an editor at local publishing house Stalker, Viktoria now supplements her pension by cleaning apartments and offices.

“Many people have to choose between buying food and paying their utility bills, which go up every month,” she tells Emerging Europe.

Oleskandr Saenko, a former manager at the famous Antonov aircraft factory, is slightly more fortunate – but still, he says this is not enough.

“My pension is four times bigger than my wife’s. We, thank God, own an apartment in Kyiv we can rent out. But between food, utilities, medical expenses, our grandchildren, we hardly have a cent by the end of the month.”

Of the approximately 11 million retirees living in Ukraine, 65 per cent receive a pension below 3,000 hryvnia per month – or about 95 euros. This, even in rural Ukraine, is not enough to live on. Only 2.7 per cent receive a pension of over 10,000 hryvnia (317 euros) a month, and these are almost always former high-ranking officials, such as ministers, parliamentarians and judges.

According to official statistics, Ukraine’s labour force currently numbers 16 million people. With 11 million pensioners, there is a major imbalance between the population expected to provide the funds for pensions and those who receive them.

However, even these statistics are doubted some. “For many, many years there has been no census conducted, and no one really knows how many elderly people there actually are,” says Viktoria. “And how many of them get no pension at all? I personally know several.”

These doubts are not without basis. Ukraine has not carried out a census since 2001, the first (and only) in its independent history. A second was planned for 2010, but postponed.

Last year, the government attempted to use digital technology to provide a more accurate estimate of the population. The figure it came up with – just above 37 million – is significantly lower than the official figure. Although this newest estimation has not been accepted as canon yet, other forecasts paint a similarly grim picture.

Not enough money coming in

Furthermore, Ukraine has a somewhat regressive taxation system. Some of the highest earning individuals in the country work as FOPs – individual entrepreneurs. This is the preferred official status for IT workers, small business owners and various freelancers. They pay an income tax rate of around five per cent, significantly less than “conventionally” employed people, like factory workers or public servants.

According to economist Hanna Vakhitova, simply raising taxes on businesses could have even worse consequences, however.

“To give something out, it should be taken from somewhere. If we start taking money from the rich, by increasing taxes for example, we will end up with even worse poverty because the businesses will move into the shadows, decreasing tax revenue, or emigrate entirely.”

However, this is already happening. A significant portion of Ukraine’s economy already operates in legally grey or outright illegal areas. Businesses regularly under report earnings and unofficially hire workers. Many people work without official contracts and get paid in cash, depriving the government coffers of funds.

The elderly suffer disproportionately. Prices have been rising across the board – the price for sunflower oil has risen by 75 per cent since last year, despite Ukraine being the world’s largest producer of the product. And the price for gas – absolutely essential during Ukraine’s harsh winters, particularly for the elderly – has more than quadrupled over the course of the year.

The economy is simply not structured to meet the needs of the most vulnerable.

“When Minister [Marina] Lazebna [Ukraine’s sitting Minister of Social Policy] tried – just tried – to raise the issue about low or sometimes nonexistent pensions, the media was up in arms demanding she gets fired. Such is the economy for the elderly,” Viktoria says ruefully.

Expect to see Ukraine’s elderly working long into what should be their retirement for many years to come.

Kaczyński says no to ‘Polexit’: Emerging Europe this week
The Serbs in pursuit of Bulgarian, and EU, citizenship
Comment