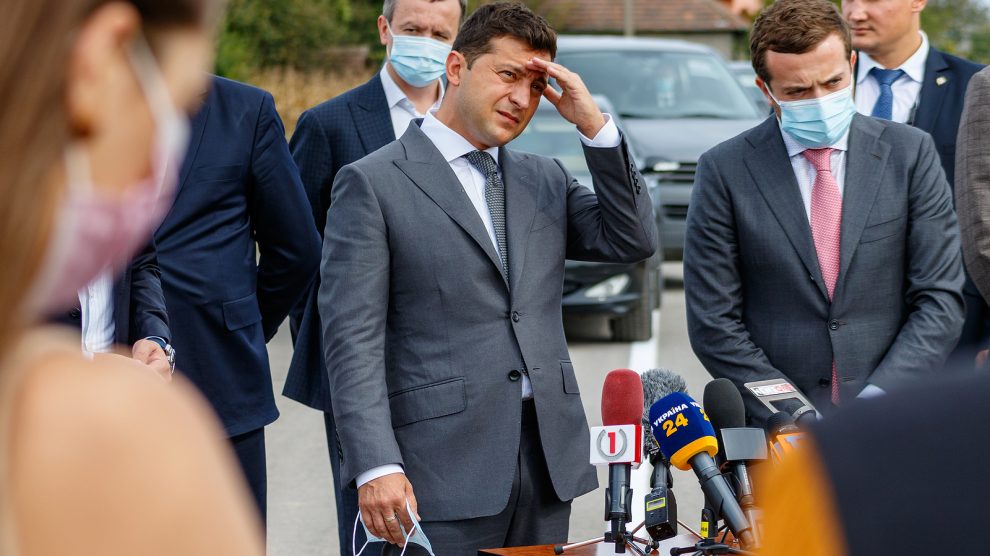 With police often turning a blind eye to breaches of lockdown restrictions, and a halting vaccine roll-out programme, Ukraine is heading for disaster. President Volodymyr Zelensky has very little time to save his faltering presidency.

Almost exactly a year since Ukraine imposed its first Covid-19 lockdown, the capital Kyiv has once again been forced to impose tough restrictions in order to try and contain the spread of coronavirus, amid a surge in new infections and a halting vaccination programme.

The mayor of the Ukrainian capital, Vitali Klitschko, announced the new measures on March 20, which followed news that more than 45,000 people had been infected with Covid-19 over the previous two days: the highest number since November.

Kyiv joins Zhytomyr, Uzhhorod, Ivano-Frankivsk and Chernivtsi in lockdown, and follows the government’s policy of imposing regional restrictions in those areas worst affected as opposed to a nationwide lockdown.

Kyiv’s cafes and restaurants are now restricted to takeout and home delivery. Bars and nightclubs are closed entirely. Mass events, including concerts and sports events are banned. For a month, fans had been allowed to attend Ukrainian Premier League matches.

Religious services are permitted, with some restrictions on attendance. Only grocery stores, pharmacies and pet stores are open without restriction, with schools returning to remote learning and private enterprises encouraged (but not required) to switch to remote working.

Public and state-owned organisations have already moved to remote work.

Public transportation continues operating at 50 per cent capacity – although this rule is expected to be reviewed on March 23, when public transport may be shut down altogether.

Despite the restrictions, central Kyiv was bustling as usual on the first day of the new lockdown.

Cafes and restaurants continued to serve customers at outdoor dining areas, as there has been no announcement specifically forbidding the practice. Some restaurants even had people eating indoors.

This response reflects Ukraine’s disjointed approach to Covid-19, which for a year has been largely ineffective and containment measures poorly enforced. Wide swathes of the population, including, crucially, business owners, have resisted lockdown measures. Since the first lockdown of March 2020, there have been sporadic protests against government regulations as well as persistent opposition from business associations and lobbying groups.

For example, in October, when daily cases had been rising steadily without respite since the beginning of the pandemic, President Volodymyr Zelensky announced if the number of daily, nationwide new infections topped 10,000 for three days in succession, a national lockdown would be imposed. After opposition from business associations, this threshold was raised to 15,000.

Furthermore, businesses often flouted regulations. In Kyiv, bars and nightclubs that were only allowed to open until midnight simply held parties and events earlier – completely defeating the purpose of the measures. Many others didn’t even adhere to this – they would close their doors and turn down the lights after midnight, as the parties inside went on.

Enforcement has been ineffective. Police have regularly been accused of taking bribes from bars and nightclubs in order to stay open past midnight. Even in the current lockdown, some “non-essential” enterprises – like beauty salons, driving schools and cigar shops – still appear to be operating as usual.

Compounding this problem is Ukraine’s abysmal lack of progress in vaccinations. Since Ukraine acquired 500,000 doses of the AstraZeneca vaccine on February 24th, only 108,000 people have been vaccinated, about 0.2 per cent of the population, the lowest rate in Europe. This is an average rate of just 4,000 per day, in a country of 41 million people.

For comparison, Ukraine has vaccinated a smaller percentage of its population than Guatemala, Laos, Senegal and Bangladesh.

One explanation for this extremely slow rate of vaccination lies in the reluctance of many people to get jabbed. Large swathes of the population either distrust the government – and thus distrust the vaccination the government acquired – or downplay the consequences of Covid-19. The fact that receiving the vaccination is entirely voluntary, even for medical staff, compounds this. In Selydove, a town in Donetsk Oblast, only five per cent of medical staff agreed to take the vaccination. Vaccine delivery teams dispatched to the town had to vaccinate themselves to prevent doses from going to waste.

According to a recent poll by the Kyiv Institute of Sociology, 60 per cent of Ukrainians do not want to be vaccinated against Covid-19.

‘This is due to prejudice and information spread on social media,” says Olena Marchenko, head of a mobile vaccination unit. Conspiracy theories regarding Covid-19 are widely prevalent in Ukraine, with many downplaying the consequences of the virus. The fact that the vaccine is made in India may also contribute to people not trusting its efficacy.

Some politicians have also been capitalising on the uncertainty of the situation. Former president Petro Poroshenko told parliament that doctors had informed him that “[The government] brought shit. And they brought it because of corruption and incompetence”.

Mr Zelensky has delivered on few of his 2019 election promises, most notably fighting corruption. Fewer people than ever are willing to trust him: and includes his please for people to get the vaccine.

Even photos of government officials (including Zelensky) and key religious leaders receiving the vaccination do not appear to have helped.

With the situation in some of the country’s western provinces increasingly desperate, Ukraine is in an uncomfortable position.

More stringent measures are needed to curb the spread of the virus, and the authorities need to crack down on businesses eschewing regulations and the police corruption which enables this.

Proper contact tracing has still not been implemented, and the government has to do much more to promote trust in the vaccine. There is still time for Mr Zelensky to rescue his presidency, but it is quickly running out.