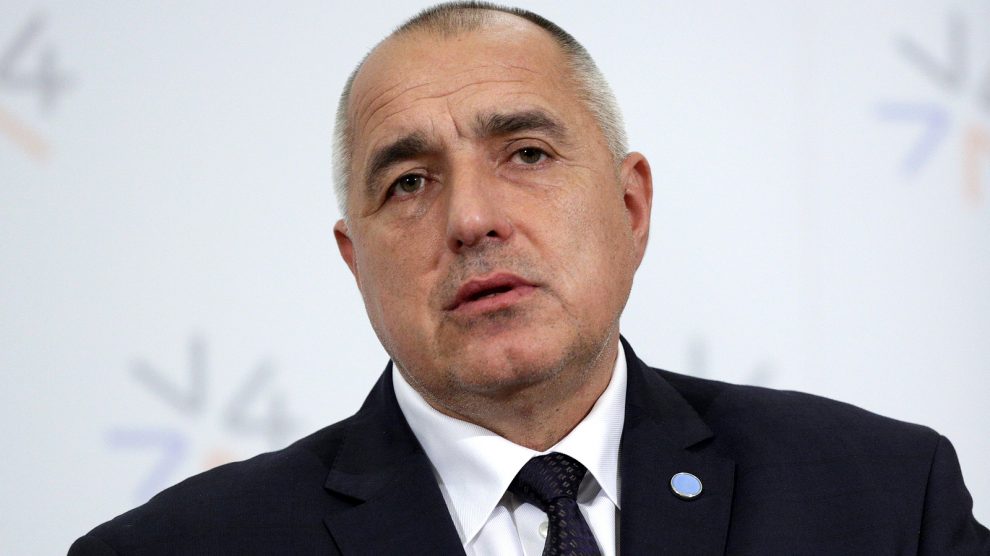 Support for Bulgaria’s ruling party has been hit by months of anti-government protests, but it is likely to win a parliamentary election on April 4. Forming a functional coalition could be tough, however.

The often massive anti-corruption and anti-government protests that have defined Bulgaria throughout the past nine months have so far failed to produce a promising alternative to GERB, the nominally centre-right party that has been running the country for almost seven years.

While rampant corruption and poor management of the Covid-19 pandemic have seen GERB lose a significant percentage of its traditional voter base, the party continues to hold a slight lead in opinion polls ahead of the country’s forthcoming parliamentary election, which will take place on April 4.

According to the most recent poll, GERB can count on the support of around 26 per cent of voters, while the main opposition party, the Coalition for Bulgaria (BSP), is polling on 22 per cent. GERB’s support however has dropped considerably over the past four years: in 2017’s parliamentary election it took 33.54 per cent of the vote, itself well short of a majority, which was why it has been forced to rule in an often fractious coalition with the far-right, nationalist United Patriots.

The protests against the government were set off on July 7 last year by a seemingly innocuous incident when Hristo Ivanov, the leader of a small opposition party, Da, Bulgaria! (Yes, Bulgaria!), tried to set foot on a public beach in the Black Sea resort of Rosenets. Instead, the politician was greeted by security forces protecting the nearby mansion of Ahmed Dogan, the former leader of the Movement for Rights and Freedoms party (DPS), and a veteran politician in Bulgaria.

In what many saw as an organised stunt, Mr Ivanov filmed his futile attempt to walk onto the public beach, and the subsequent footage sparked outrage amongst many in Bulgaria, who saw it as a further example of the state’s shadowy use of the state security apparatus. Mr Ivanov accused GERB’s leader and Bulgaria’s prime minister, Boyko Borissov, of enabling the encroachment of private property onto public land through the use of taxpayers’ money to provide one of the most powerful men in Bulgaria with security.

These suspicions were confirmed a day later when president Rumen Radev, a member of the opposition BSP revealed that the security personnel at the beach were employees of the National Protection Service (NSO) and called for the the prime minister, along with the chief prosecutor, to resign.

The situation heated up even further on July 9, as prosecutors entered the presidency building and arrested two members of the presidential administration, a move which many saw as revenge for Mr Radev’s stance, and a gross overreach of judicial power.

An inconsistent approach to Covid-19

The pressure brought about by the protests – which at their peak were the largest Bulgaria had seen in decades – has undoubtedly affected the incumbent government’s ability to deal with the Covid-19 pandemic.

Its inconsistent and dangerous approach to the coronavirus can be attributed to GERB’s efforts to maintain its fragile hold on power, constantly balancing between appeasing the entertainment, tourism, and hospitality sectors (the most profitable part of the Bulgarian economy) and others opposing the lockdown, and voters worried about the inadequate measures taken to address the pandemic.

Despite Bulgaria ranking last in the EU in terms of vaccination roll-out, the government decided to open restaurants and bars on March 1, following considerable pressure from business owners.

The reopening did not last long: following a predictable spike in Covid-19-related hospitalisations, a strict lockdown was reintroduced in the capital Sofia on March 20, and in the rest of the country on March 22.

Health Minister Kostadin Angelov has placed the blame for Bulgaria’s poor vaccination campaign on AstraZeneca’s failure to comply with the delivery schedule agreed upon in 2020.

While it is true that AstraZeneca cut deliveries to the European Union as a whole by 60 per cent in the first quarter of 2021 because of issues with production, this has affected countries across the bloc. GERB officials have been accused of mismanaging vaccine orders, including the failure to diversify supllies, resulting in over-dependency on AstraZeneca.

On March 20, Mr Borissov paid a visit to a pharmaceutical facility in the town of Razgrad which will have a license to produce the Pfizer vaccine. Borissov has promised that the facility, said to open in the coming months, will have the capacity to manufacture millions of doses of the vaccine over the next 16 months, which will allow for the acceleration to the vaccination campaign, and will supposedly even allow the vaccine to be exported elsewhere in Europe.

While visiting the site, Borissov told journalists that he doubts the opposition will be able to do a better job than GERB at dealing with the pandemic and organising the vaccination campaign.

The BSP has promised to improve the financial support offered to business owners affected by the pandemic, which it sees as a key factor in ameliorating the push against the lockdown coming from the hospitality sector.

The socialist-led BSP, which has frequently criticised the GERB government for its repeated expulsions of Russian diplomats from Bulgaria, has also suggested that the country should begin purchasing the much cheaper Russian Sputnik V vaccine.

BSP leader Kornelia Ninova was involved in her own share of controversy last summer, as it was revealed that she is the owner of a luxury hotel in Halkidiki, Greece, estimated to be worth tens of millions of US dollars. Ninova could not explain to the public how she came to be in possession of the property.

Ninova’s leadership of the BSP and the party’s 2021 campaign has also lost the endorsement of former party leader and former Bulgarian PM Sergei Stanishev, who is currently the president of the European Parliament’s second-largest party grouping, the Party of European Socialists (PES).

Stanishev retracted his support for Ninova over ideological differences – prior to the Greek hotel revelations – namely her stance against Bulgaria signing the Istanbul Convention and the UN Global Compact for Migration, as well as her public admiration for Hungary’s Viktor Orbán.

Nonetheless, when the European Parliament voted to declare the whole of the European Union an LGBT+ Freedom Zone at the start of the month, BSP MEPs overwhelmingly voted in favour of the resolution, while the majority of GERB MEPs voted against it.

In the likely scenario that GERB does not receive a majority of votes and is unable to form a coalition, Ninova is likely to become the second female prime minister in Bulgaria’s history, after Reneta Indzhova, who held the position between 1994 and 1995.

There Are Such People

Forming a coalition, however, might be a difficult task this year for both GERB and BSP, as the third best-performing party in polls, There Are Such People, has explicitly made it clear that it will not form a coalition with either mainstream political party.

The newly formed party could receive 13.1 per cent of votes according to the latest polls, and is arguably the most concrete result of the 2020-21 protests. Led by showman-turned-politician Stanislav “Slavi” Trifonov, There Are Such People is a textbook example of a populist party.

The unusual (and difficult to translate) name of the party is based on a common phrase used by Bulgarians to show discontent with the country, “There is no other such country”. Trifonov attempted but was not allowed to register the phrase as the name of the party. The current name is based on the more optimistic continuation of the phrase, “…but there are such people”, which implies that the people are the only solution for the country.

Trifonov, who is seen as having the potential to play an important role in Bulgarian politics, rose in popularity in the early 1990s as a musician in the popular Ku-Ku Band, known for its hugely recognisable hit songs combining elements of Balkan folk and pop-folk music with rock and jazz. He was also, for almost two decades, the host of Bulgaria’s most-watched late-night TV show Slavi’s Show which ended in 2019.

The party’s campaign is focused on its huge involvement in the protests, but aside from promises to tackle corruption and embezzlement, it is also promising to address Bulgaria’s ridiculously low minimum wage.

This discussion has largely been ignored by GERB which has focused on increasing salaries for skilled professionals, while often hinting that low-skilled adults are better off working elsewhere in the EU and sending remittances back home, which are estimated to annually contribute between two and three billion euros to the Bulgarian economy.

The end of the far-right?

Somewhat more surprisingly, another party to grow since the 2017 elections is the DPS. The party could be the choice of 12.4 per cent of voters, a notable increase from the 9.2 per cent it took in 2017.

The liberal DPS is usually associated with Bulgaria’s sizable Turkish minority, but the party is generally focused on representing all minority interests in the country, including other Muslim communities and Roma. It is one of few Bulgarian parties to have explicitly stated public support for LGBT+ rights.

DPS’s growth is surprising, however, given that it too has been hit by corruption scandals, not least Mr Dogan.

Another, arguably much more problematic, figure in the DPS ranks is Delyan Peevski, an oligarch and media mogul who owns 80 per cent of the print media in Bulgaria and who has been mentioned by name in numerous Reporters Without Borders reports as a key reason for Bulgaria’s low press freedom score.

Current DPS leader Mustafa Karadayi has so far not been on the receiving end of any corruption-related backlash. He has also openly been calling for GERB to step down and has on numerous occasions criticised GERB for its handling of the Covid-19 pandemic.

While DPS has in the past cooperated with GERB, many see a Ninova-Karadayi coalition as a likely alternative to Borissov.

Two other parties, Democratic Bulgaria and Izpravise.bg, have also gained support as a result of the protests. Democratic Bulgaria is a centre-right electoral alliance made up of three parties, neither of which managed to get more than five per cent of the vote in 2017, but which together are now predicted to gain 6.8 per cent. Izpravise.bg meanwhile began as civil organisation led by former Bulgarian ombudsman Maya Manolova, who left her position in 2019 questioning the democratic legitimacy of the institution, and is predicted to receive 4.7 per cent of the vote.

Both parties enjoy considerable support amongst Sofia’s white-collar class and the Bulgarian diaspora for the corruption-free image of their members, their liberal ideas, and the seemingly Western-like rhetoric and style of campaigning, but are often scapegoated by the two mainstream parties for their openly socially liberal policies and are thus unlikely to gain mainstream status in the foreseeable future.

Finally, and rather more optimistically, the largest overall drop in support, based on the polls, has been felt by the far-right United Patriots, which received 9.7 per cent of the vote in 2017. The political alliance was formed by three nationalist parties, but has since split. The largest faction, VMRO, is predicted to be the choice of just 4.2 per cent of voters.

Time is running out for Ukraine as corruption hinders Covid-19 fight
A Romanian Yellowstone: Elsewhere in emerging Europe
Comment