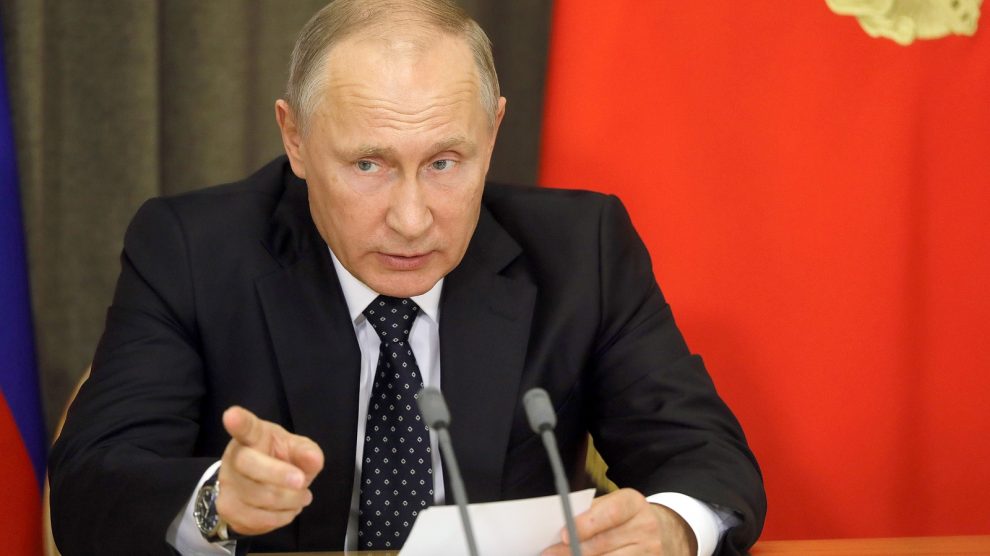 Russia has formalised its occupation of parts of eastern Ukraine by recognising the independence of two entities created by the Kremlin in 2014.

Russia moved closer to an all-out invasion of Ukraine late on February 21 when the country’s dictator, Vladimir Putin, officially recognised the “people’s republics” of Donetsk and Luhansk in the east of Ukraine and ordered his armed forces to occupy the two artificial entities, first created by the Kremlin during a previous conflict in 2014.

The first Russian troops crossed the border while Putin was announcing his recognition of Donetsk and Luhansk in a rambling, angry, historically inaccurate, and at times incoherent 56-minute speech that questioned Ukraine’s right to exist, saying that it was a “Bolshevik invention” created by Lenin immediately after the revolution of 1917.

“As a result of Bolshevik policy, Soviet Ukraine arose, which even today can with good reason be called ‘Vladimir Ilyich Lenin’s Ukraine’,” said Putin. “He is its author and architect. This is fully confirmed by archive documents. And now grateful descendants have demolished monuments to Lenin in Ukraine. This is what they call decommunisation. Do you want decommunisation? Well, that suits us just fine. But it is unnecessary, as they say, to stop halfway. We are ready to show you what real decommunisation means for Ukraine.”

Putin then signed treaties with the leaders of the two Kremlin-backed entities which included a provision to guarantee their security with Russian forces.

Whether Russia’s troop movements constitute a new invasion of Ukraine is a moot point: Donetsk and Luhansk already relied on support from Moscow, and it is believed that thousands of military officers are permanently stationed in the two entities, embedded in their own armed forces.

The initial reaction from Ukraine’s western allies suggested that tough sanctions against Moscow would not be forthcoming at this stage, although German Chancellor Olaf Scholz said that the Russian-built Nord Stream 2 won’t be certified and that he has instructed a new assessment of how Germany’s energy supplies can be secured.

“The situation has fundamentally changed,” he said, after weeks of prevaricating other whether or not Germany should pull the the plug on the pipeline, which doubles Russia’s capacity to supply Europe directly with gas, bypassing Ukraine and denying it of billions of US dollars in transit fees.

The United States announced a ban on investment, trade, and financing of Donetsk and Luhansk, and the authority to impose sanctions on anyone who operates in those areas of Ukraine: certainly not the “mother of all sanctions” package that had been floated in previous weeks, although tougher measures may follow in the coming days.

Didier Reynders meanwhile, the European Commissioner for Justice, said that while Russia’s move is an “act of war”, the large-scale sanctions package prepared in Brussels in the event of an invasion of Ukraine will be imposed “gradually”.

So far, the only ally of Ukraine to call Russia’s formal entry into Donetsk and Luhansk an invasion is the UK, whose health minister, Sajid Javid, said on the morning of February 21 that, “we have seen that [Putin] has recognised these breakaway regions in Ukraine and from the reports we can already tell that he has sent in tanks and troops. From that you can conclude that the invasion of Ukraine has begun.”

Javid compared the situation to the Cuban Missile Crisis of 1962.

“I do think it’s as serious a situation as that,” he added. “There is still an opportunity here for President Putin to step back, despite him having now chosen confrontation over dialogue. It is not too late for him to step back and bring his troops back into Russia and open dialogue. But we have to be realistic – clearly that does not seem his intent, certainly at this point in time, and we have to respond very significantly.”

The UK’s defence minister, Ben Wallace, also suggested that Putin was unlikely to stop at an occupation of territory he already held.

“Many of us were forewarning that President Putin already had an agenda,” Wallace said in a statement. “You heard that agenda in his speech last night. This is a sovereign state that has now had some of its land effectively annexed from it. This is a sovereign, democratic state in Europe, and all of us in Europe should worry.”

In Ukraine’s capital Kyiv, the mood remains calm, if apprehensive.

In a televised address to Ukrainians, the country’s president Volodymyr Zelensky accused Russia of wrecking any chance of finding a diplomatic path to peace, and ruled out making any territorial concessions.

Zelensky said that while Ukraine remained committed to peace and diplomacy he was expecting “clear and effective” steps from its allies. “We’re afraid of nothing and nobody. We will give nothing away,” he said.

Defence Minister Oleksii Reznikov later said that the country remained “confident and calm. We are ready and able to defend ourselves and our sovereignty.”

What now remains to be seen is whether Russia has recognised the occupied territories’ existing borders – or the much larger territory they would like to control, which includes the major port city of Mariupol.

Thus far, that is not clear, with several commentators suggesting that the ambiguity may be intentional.

What is clear is that further escalation that undermines an outlook for Ukraine’s macro-economic stability could pose severe economic implications for the country.

A scenario of hryvnia losses if reserves were depleted, an acceleration of capital outflows, higher inflationary pressure as well as growth decline and/or wider budget deficits are possible outcomes, according to Dennis Shen of Scope Ratings.

‘An empty, rusty pipe at the bottom of the Baltic Sea’: The end of Nord Stream 2?
Armenia, Georgia battle over yoghurt: Elsewhere in emerging Europe
Comment