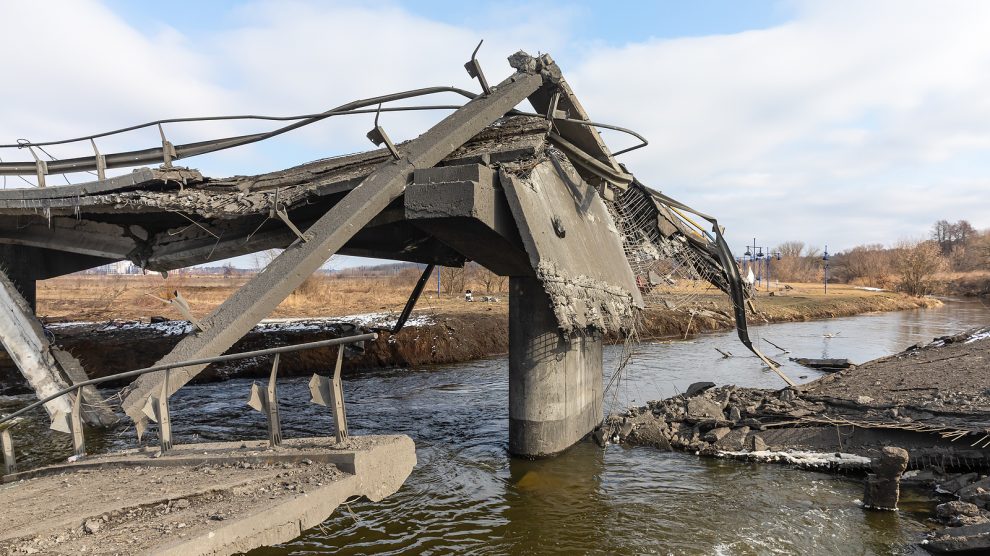 Russia hit Kyiv with cruise missile strikes on Thursday – while the UN Secretary General António Guterres was visiting the city.

Ukrainian President Volodymyr Zelensky said the strikes happened “immediately after” his talks with the UN chief, “and this says a lot about Russia’s true attitude to global institutions, about the efforts of the Russian leadership to humiliate the UN and everything that the organisation represents.”

Thursday’s missile strikes came just hours after US President Joe Biden asked Congress to give immediate approval for spending that would include over 33 billion US dollars in military aid, involving everything from heavy artillery and armoured vehicles to greater intelligence sharing, cyberwarfare tools and many more anti-tank and anti-aircraft missiles.

A Ukrainian commander in the besieged city of Mariupol said on Thursday that there are more than 600 injured civilians and fighters in the Azovstal steel works.

Serhiy Volyna, acting commander of the 36th marine brigade, said hundreds of civilians including children were living in unsanitary conditions and running out of food and water. Officials earlier said Russian forces were again attacking the huge steel plant.

On Wednesday, Zelensky said on Wednesday that the total losses inflicted upon Ukraine from the war have reached 600 billion US dollars. “More than 32 million square metres of living space, more than 1,500 educational facilities and more than 350 medical facilities have been destroyed or damaged,” he added. “About 2,500km of roads and almost 300 bridges have been ruined or damaged.”

According to the Vienna Institute for International Economic Studies (wiiw), which published its spring forecast this week, Ukraine’s economy is set to “collapse” by 38-45 per cent in 2022. In an effort to give the economy a boost, the EU and UK this week removed tariffs on most Ukrainian exports, but logistical issues could limit trade volumes.

Ukraine’s sea ports have been blocked since the Russian invasion two months ago and the country, a major agricultural producer, has been forced to export by train via its western border or via its small Danube river ports into Romania.

Ukraine has sent around 80,000 tones of grains to the Romanian Black Sea port of Constanţa so far, with more expected to arrive, the port’s manager said on Tuesday, but congestion at the port, as well as the incompatibility of Ukrainian and Romanian railway gauges, has limited the amount of goods moving through Constanţa.

Zelensky also this week accused Russia of trying to target more of Europe after explosions in a separatist region of Moldova that borders Ukraine.

Authorities in Transnistria reported a string of attacks on Monday and Tuesday, with two explosions at a radio facility close to Ukraine’s border and an attack on a military facility. Ukraine said Russia was responsible, while local forces blamed Ukraine.

Ukrainian presidential aide Mykhailo Podolyak meanwhile described explosions heard in three Russian provinces bordering Ukraine as “karma” and payback for the war in Ukraine. He did not acknowledge Ukraine was responsible for the incidents.

Ukrainian school children fleeing their country and joining classrooms in Italy and France are dazzling their new teachers with their maths skills, prompting debate about the slipping standards in western European classrooms.

Russia has been accused of seeking to blackmail the European Union as the energy giant Gazprom confirmed it had halted gas supplies to Poland and Bulgaria, prompting crisis talks in capitals across Europe. In a statement, the Russian supplier said on Wednesday it had acted in response to the failure by the two EU countries to make their payments in roubles. “Gazprom has completely suspended gas supplies to Bulgargaz and PGNiG due to absence of payments in roubles,” a statement issued by the company said.

The European Union executive sent a formal letter to Hungary on Wednesday, officials said, the first step of a fresh offensive to safeguard democratic checks and balances that could freeze funds for Prime Minister Viktor Orbán over corruption. Despite years of criticism by rights campaigners that he was channeling EU funds to his associates, Orbán won a fourth consecutive election victory earlier this month. The European Commission responded by launching its new sanction tool.

The Freedom Movement (GS) of Robert Golub, which campaigned on a platform of green energy, media freedom and rule of law, ousted the populist Slovenian Democratic party of erstwhile PM Janez Janša in a parliamentary election last weekend. GS took around 34.5 per cent of the vote compared to 23.5 per cent for Janša’s Democrats, although the party – with 41 seats in the 90-seat parliament – are unlikely to be able to form a government without looking to Slovenia’s smaller parties for support.

Montenegrin lawmakers on Thursday approved a new, pro-Western government that promised to speed up European Union integration and make an effort to bridge a deep political divide in the small Balkan nation. The government of Prime Minister Dritan Abazović won support from 45 lawmakers in the 81-member parliament while three votes were against. Pro-Serbian groups did not attend the session. The vote came weeks after the previous, pro-Serbian government was ousted in a no-confidence motion in February.

The European Union wants to start formal membership talks with North Macedonia by early this summer and renew efforts to address objections from Bulgaria that have held up the process, a top EU official said on Wednesday. Olivér Várhelyi, the EU ’s enlargement commissioner, said during a visit to North Macedonia that the bloc is eager to break the two-year deadlock. EU leaders gave North Macedonia and Albania the green light in 2020 to begin accession talks, although no date was set for the start of negotiations. The dispute with Bulgaria has also delayed Albania’s bid.

Rohlik Group posted a 53 per cent year-on-year rise in net revenue to 490 million euros in its past fiscal year, the company said on Wednesday, as the Czech-based online grocery delivery firm builds on a European expansion push. The group, founded in 2014 by entrepreneur Tomas Cupr, will end its fiscal year to April with more than 1 million customers, it said, after launching operations in Germany last year, adding to existing markets in Czechia, Austria and Hungary. It plans to start in Italy, Romania and Spain in 2022, as well as to further expand in Germany.

A pipeline that Kazakhstan uses to export most of its oil began operating at full capacity over the weekend, one month after key offloading infrastructure was allegedly damaged in a storm. The Caspian Pipeline Consortium, or CPC, said in a statement on April 25 that it had restored a buoy mooring device used for loading oil at Russia’s Novorossiysk terminal to working order after divers were able to take advantage of a “short-term improvement in the weather.”

Officials in Kyrgyzstan have voiced alarm over reports that neighbouring Tajikistan may have bought Bayraktar TB2 unmanned aerial vehicles from Turkey, an acquisition that would mark a major development in the arms race unfolding between the two nations. Deputy Kyrgyz Foreign Minister Jeenbek Kulubayev told lawmakers on April 27 that the government in Bishkek had pleaded with Ankara to be cautious when selling the lethal drones to Dushanbe in light of border tensions.

Meet the 28 cities in CEE which made the final cut for the EU’s climate-neutral, smart city push
Is Russia attempting to reignite a frozen conflict in Moldova’s Transnistria region?
Comment