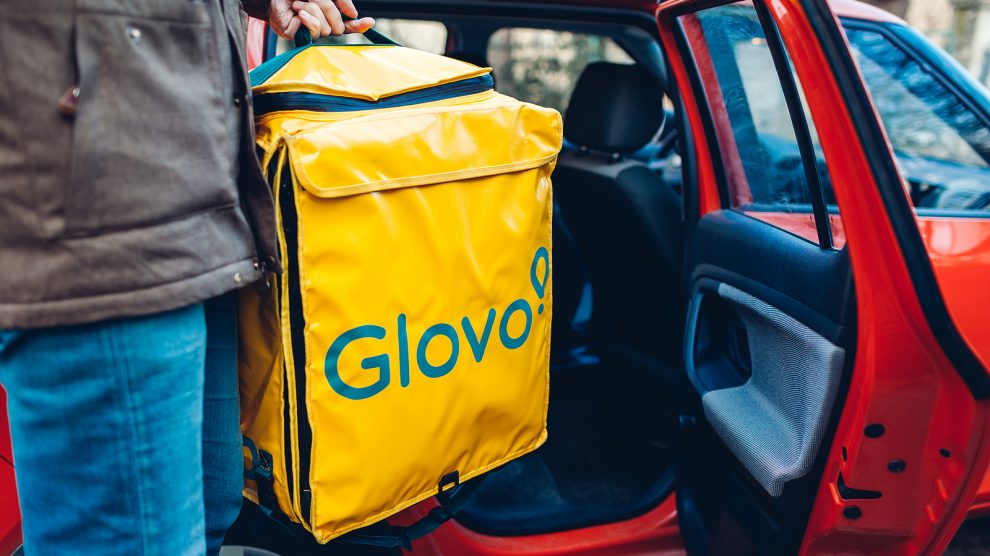 While in Western Europe, gig economy workers are finally being recognised as formal employees, Ukraine is trying to implement legislation that will make their status even more precarious than it is now.

The nature of employment is changing. In the past decade or so, the explosion of services like Uber and dozens of identical courier apps have revolutionised working relations. Now, instead of having a stable workforce, these companies can deploy a constantly rotating array of short-term workers in what has become known as the gig economy.

The model has found particularly fertile ground for growth in Ukraine. With some of the lowest wages in Europe, short-term gig work has been commonplace since the 1990s, pre-dating Uber.

Mass privatisations pushed many into unemployment, making those affected amenable to any type of work, even short-term. Other workers had to supplement their regular jobs with short-term gigs: a particularly common scenario is retired women offering cleaning services to augment paltry pensions.

Furthermore, Ukraine has one of the most developed informal economies in the world – some estimates claim it comprises as much as 35 per cent of the economy.

Since the beginning of the Covid-19 pandemic, demand for courier services and other types of gig work in Ukraine (and indeed in the entire world) has skyrocketed. More people than ever have been relying on these apps to deliver food, groceries, medicine and mail. With periodic shutdowns in public transportation, people have also increasingly been using mobility services to get around.

However, amidst all the optimism and excitement about the coming digitalisation of the economy and the various breakthroughs and achievements of Ukrainian companies and engineers, one crucial element of the digital economy – the lowest-level workers who these services rely on – has been overlooked.

For most, services like Uber and delivery app Glovo are innovative ways to make life more convenient. However, in Ukraine, the combination of the inherently precarious nature of gig work and the complete lack of enforcement of labour laws, norms and regulations enshrined in the constitution, makes gig workers some of the most vulnerable in Ukraine.

Recent moves in the country’s parliament to institutionalise gig work and repeated attempts to legally dismantle Ukraine’s labour code point to an ominous future for these workers.

On the surface, Ukraine has a very progressive labour code. Drafted in 1971, it provides generous protections and benefits to workers in accordance with the socialist principles which governed the country at the time. Trade unions have substantial collective bargaining rights. Workers can only be fired after being given two months’ notice. Fully-paid maternity leave is set at 126 days. Income tax payments are the responsibility of the employer.

However, these rules are barely enforced outside of state enterprises, which has led to Ukraine developing a highly sophisticated informal economy. “Grey” and “black” work is commonplace. “Grey” work refers to the practice where employees are officially paid the minimum wage – to minimise the employer’s tax contributions – with the rest of their actual salary handed over in cash. “Black” work refers to illegal employment, with cash salaries and no contracts.

Gig economy companies have found an even craftier way of stopping labour laws from interfering with their profits.

As in many other countries in the world, gig workers are not legally considered to be employees of a company. Instead, they work as “independent contractors”. This model of work is common throughout Ukraine, even beyond the gig economy – many IT professionals, for example, work as “independent contractors”. However, while this model may work well for highly-paid IT professionals, it mires workers like couriers and drivers in financial insecurity. And it also creates situations where an IT worker on 1,500 euros a month pays less tax than a miner making 300 euros a month.

Bohdan Kohanskiy is a lawyer with Trudovi Initsiativi, a law firm specialising in workers’ rights who fetched and carried as a courier while he was at university.

He says that the structure of Ukraine’s taxation system has much to answer for.

“There is no progressive scale of taxation,” he says. “Small businesses have to pay the same percentage of tax as large businesses. As a result, many small businesses can’t afford to offer benefits to their workers.”

The risks of gig work

Gig workers are responsible for their own work equipment – such as cars for taxi drivers, and bags for couriers. They receive no paid time off at all – if they don’t work, they don’t get any money. There is no insurance either, even now when they stand a much bigger risk of contracting Covid-19 than a regular worker.

The risks aren’t just limited to the pandemic. There is most demand for delivery during the winter months, when roads can be precariously icy. Most couriers travel by bicycle or scooter – Kyiv’s roads are notoriously unfriendly for cyclists. According to Mr Kohanskiy, in Ukraine, the chances of getting into a fatal road accident are 29 times higher on a two-wheeled vehicle than in a car. He himself once fractured his collarbone and had to get eight screws inserted into his forearm after he crashed his bicycle while working.

In 2019, a tragic incident demonstrated the true cost of workers’ vulnerability: a 20-year-old courier in Kharkiv died in a road accident while making a delivery. His family received no compensation.

Working for courier companies takes a while to even become profitable for the workers.

“1,200 hryvnia [35 euros] for this damn thing!” says Oleh, a middle-aged courier working with Bolt Food, referring to the bag in which he transports his deliveries. “I could have eaten for a month with this money.” The bag is emblazoned with Bolt Food’s logo – essentially the workers pay to advertise for the company. Oleh covers the Bolt Food container with an opaque drawstring bag. “Damn them if they think I’m advertising for them. I didn’t sign up for that,” he says.

In much of the world, gig workers have gradually been gaining rights. Earlier this year, Uber drivers in London, after a lengthy legal battle, won the right to be considered as workers of the company. In 2019, a Spanish court ruled that couriers of the app Deliveroo should be classified as workers rather than freelancers.

Trying to change the law

However, the Ukrainian government has for years been attempting to dismantle its progressive labour code. Multiple times, parliament has tried to pass provisions which establish zero hour contracts, at-will employment and greatly reduced overtime compensation.

Each time, these have failed, with stringent opposition from the Federation of Trade Unions. Article 22 of Ukraine’s constitution enshrines the principle of non-retrogression, which stipulates that already-established rights can’t be limited or abrogated, but only strengthened and expanded.

One failed law was Bill 1658, which attempted to make significant amendments to the Labour Code. The International Labour Organisation’s response spoke volumes: in a report, it argued that the bill violated no fewer than 59 conventions, which Ukraine had both signed and ratified.

Most recently, parliament floated Bill 4303 – on the development of the digital economy. This initiative is highly related to Diia City – a proposed special legal regime for ICT companies. Under its provisions, gig workers and gig contracts are formalised. Gig workers would be able to be fired without any grounds, pending a 30-day notice period. If workers had been in their position for less than three months, the notice period is reduced to just three days, a serious violation of ILO convention 158, and Article 7 of the International Covenant on Economic Social and Cultural Rights.

“When I saw this bill, I thought to myself ‘surely this was written by psychopaths’. It is totally not appropriate for our constitution or for international norms,” Bohdan Kohanskiy tells Emerging Europe. “The bill looks as though its trying to cancel the whole labour code, the whole constitution.”

So why is it that when much of the world, particularly in Europe, is gradually coming around to the idea that gig workers are actual employees, Ukraine has been repeatedly trying to do the opposite?

“It’s very sad, but there is no major political party that can protect workers because all the major parties are servants of oligarchs. One serves one oligarch, one another…ideology in Ukrainian politics is just spectacle, it doesn’t matter, nobody in these parties truly believes what they promote…politicians are just parrots of oligarchs, political prostitutes. It’s not just that there is no workers’ party – there are no proper parties in Ukraine at all,” says Mr Kohanskiy.

As long as Ukraine retains ambitions to eventually become a member of the European Union, it has to align itself with norms and practices common in the bloc.

Throughout Europe, trade unions have strong presences and workers are given generous benefits – furthermore, crucially, the rule of law is paramount. The pursuit, by various Ukrainian governments of short-term gains at the expense of workers can only take the country so far. Crucial for a healthy economy is a healthy consumer base, not one ravaged by fear, uncertainty and precarious employment.

Since independence, Ukraine’s population has declined by nearly a fifth, due to a combination of low fertility rates (caused by economic depression), lower life expectancy and emigration. Every major city other than Kyiv has seen its population fall – in smaller towns and villages, the decline is catastrophic. According to a recent UN report, Ukraine has lost a full 25 per cent of the labour force – more than poor, populous countries like the Philippines, Indonesia, Egypt and Ethiopia.

Better conditions for workers can de-incentivise migration. Far too many Ukrainians continue to view 14-hour shifts picking fruit in Poland as preferable to working in Ukraine. Better wages can have the same effect while also revitalising fertility rates.

With employment relations shifting as a result of digitalisation, and rarely to the benefit of workers, the Ukrainian government has to act quickly. A happy, content, well-rested workforce can only be good for the country as a whole. And for Ukraine to close the gap with its western neighbours, it has to raise the standards of everyday people.

Unfortunately, it may be a while before we see any substantial changes.