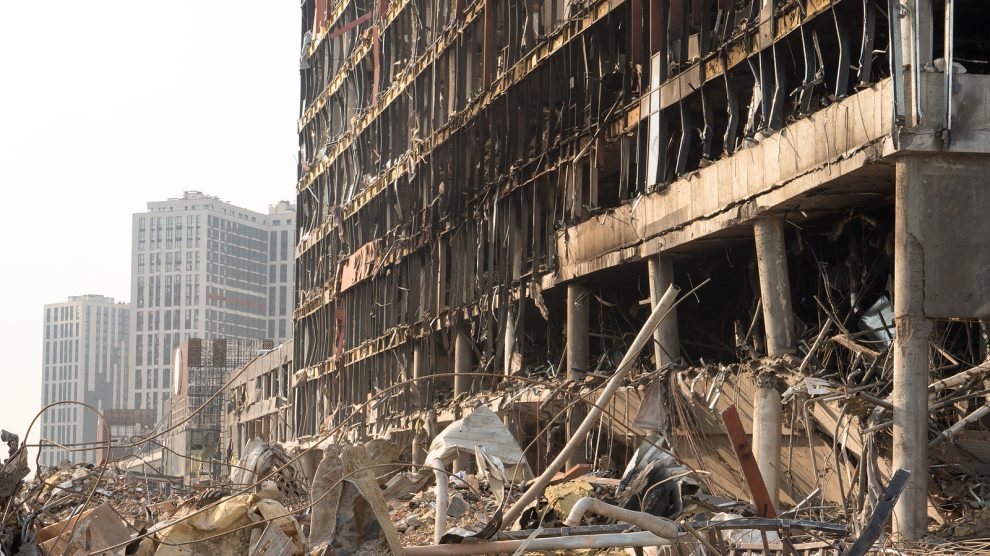 Ukraine is in need of critical electrical transmission equipment as it struggles to cope with the aftermath of Russian attacks on its power infrastructure. Failure to provide could lead to a new wave of refugees fleeing the country this winter.

There is broad agreement across the international community that Ukraine needs hundreds of billions of euros for reconstruction of the country, but there is far less consensus on where the money should come from, or when it should arrive.

The latest attempt to at least partially remedy that problem was a conference in Berlin this week, hosted by German Chancellor Olaf Scholz and European Commission President Ursula von der Leyen.

“This is not a regular donor conference. It is something more profound. A new Marshall Plan for the 21st century,” said Scholz, comparing the challenge to the US funding of Europe’s reconstruction that followed the end of World War II.

The World Bank has put the total cost of damage to Ukraine so far at 350 billion euros. Some countries, notably Poland the Baltic states, have called for frozen Russian assets to be used to at least partially cover the cost.

Mateusz Morawiecki, Poland’s prime minister, told the conference that Russian assets and those of Russian oligarchs present a “huge pot of gold” that should be used for Ukraine’s reconstruction.

“We must make sure that the offender pays for reconstruction. Russia should pay Ukraine war damages, war reparations,” Morawiecki said

But the conference did not commit to any new funding. Ukrainian President Volodymyr Zelenksy, who addressed the conference virtually, said Ukraine needed funds to cover a budget deficit of 38 billion US dollars, and that Kyiv has a 17 billion US dollars “fast recovery” plan to repair damage to hospitals, schools, transportation and energy infrastructure.

“As of now, we haven’t received a single cent for the implementation of that plan,” he said

Ukrainian Prime Minister Denys Shmyhal – who attended in person – said that Ukraine would need rapid funding “to recover infrastructure immediately” to survive the winter and prevent a humanitarian catastrophe and wave of migration.

In the immediate future, Ukraine is in need of critical electrical transmission equipment as it struggles to cope with the aftermath of Russian attacks on its power infrastructure.

Von der Leyen appeared to recognise the urgency, saying that that reconstruction had to begin “now”.

“We cannot wait for this terrible war to be over,” she said, adding: “[Vladimir] Putin is specifically targeting civilian infrastructure in order to paralyse Ukraine and terrorise its people. We will not let that happen. So we are also looking at what can already be repaired.”

According to Ukraine’s government, at least 30 per cent of its energy infrastructure has been hit since missile strikes intensified on October 10, leading to electricity cuts and rolling blackouts.

Last week, the Norwegian Refugee Council, a humanitarian NGO, warned that a lack of water, heating or shelter in Ukraine could force many to flee across the border into neighbouring Poland, Moldova and Romania, communities already hosting significant numbers of Ukrainian refugees, and themselves living through the European cost-of-living crisis.

“Attacks on civilians and civilian infrastructure must stop. Human suffering is being prolonged, and as temperatures continue to plummet, humanitarian needs will increase. All warring parties must respect international humanitarian law and ensure that civilian lives and civilian infrastructure are protected throughout this conflict. Winter must not be used as a weapon of war,” says Carlo Gherardi, the Norwegian Refugee Council’s regional director for Central and Eastern Europe.

In Poland, it is estimated that the number of new refugees from Ukraine could range from 500,000 to 750,000 before the end of the year, with half remaining in Poland while others move onwards to other European countries.

In Moldova 40,000 new refugee arrivals are expected over the winter, in addition to the 90,000 already present in a context where 70 per cent of refugees are hosted by local families. Whole community support is needed to upgrade poorly insulated houses and support access to heating systems and winter items. Temperatures are already below zero, placing the life of thousands of people at risk.

Moldova is also dealing with 30 per cent inflation affecting the host community’s capacity to meet their own winter needs and to support refugees.

“We are still working with our partners to provide critical relief items to people living in active conflict areas in the east, but we are now seeing increasing needs across the country due to widespread infrastructure damage, and it will only get worse,” adds Gherardi.

(Re)building Ukraine
‘In difficult times, we realise how important connectivity is’
Comment