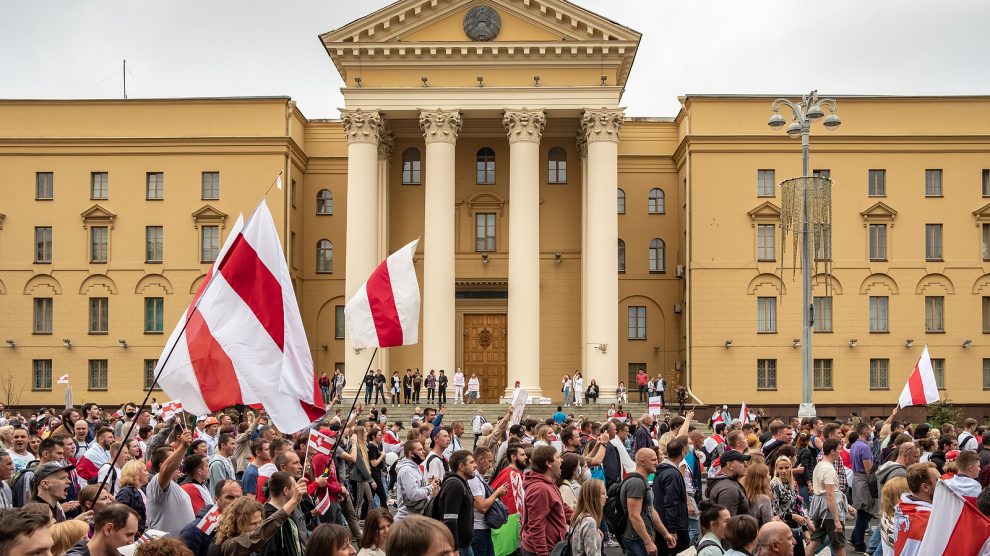 As the West beefs up sanctions against Belarus, Georgia has begun cooperating with its repressive State Security Committee – still known as the KGB. Georgia’s western allies are wondering why.

Long forgotten by many, the agreement between the two countries was originally signed in 2016 and covered exchanges of information in the field of state security, as well as cooperation in the fight against organised crime, threats to constitutional order, sovereignty and territorial integrity, terrorism, cyber-terrorism, and the illegal trade of weapons.

Given that Belarus has for the past year been clamping down – often violently – on opponents of its dictator, Alexander Lukashenko, following protests against the outcome of a rigged presidential election that Lukashenko claimed to have won with an implausible 80 per cent of the vote, news that Georgia had begun cooperating with Belarus sparked both domestic and international criticism.

Many civil rights groups fear that the deal could endanger Belarusian dissidents sheltering in Georgia and undermine Georgia’s relationship with the West, which has imposed sanctions on the government in Minsk.

The Georgian State Security Service, however, has called the criticism “disinformation” and “an attempt to politically discredit the agency”.

In an official statement, the agency claimed that the agreement would not go against Georgia’s state interests and would be implemented on a voluntary basis to “fight against international and transnational organised crime, terrorism and corruption”. It also pointed out that Georgia had similar agreements with the US, UK and EU states.

Georgia’s international partners nevertheless referred to the implementation of the deal as “very scary” and expressed concerns as to why Georgia had “bound itself with one of the most abusive regimes in the world”. There were also questions about why the agreement was being implemented only now, five years after it was signed, “in a situation where everyone else in the world gave up cooperation with Belarus”.

Some analysts have raised fears that recognition of Georgia’s breakaway territories, Abkhazia and South Ossetia, could have played a decisive role.

At a summit in the Russian resort town of Sochi in June, Lukashenko told his Russian counterpart Vladimir Putin that that Belarusian national airline Belavia would launch flights to Crimea, an indirect but nevertheless clear indication of Minsk’s readiness to recognise Russia’s illegal annexation of the Ukrainian territory.

The announcement contrasted with the Belarusian government’s previous refusal to acknowledge the annexation over fears for its own sovereignty.

However, since the West recently beefed up economic sanctions against Belarus, the Lukashenko regime has been increasingly dependent on Russia.

Even though Minsk has so far stuck to its line of not recognising Crimea’s annexation by Russia nor the independence of Georgia’s Russian-backed separatist republics, it now has almost no room for manoeuvre.

The Georgian government’s decision could therefore have been made amid fears of a similar scenario. Since a brief war with Russia in 2008, the country has pursued a “non-recognition” foreign policy, which prioritises avoiding international recognition of the independence of Abkhazia and South Ossetia.

“Non-recognition is one of the priorities of Georgian foreign policy. It has influenced the actions of the Georgian government when it comes to Belarus”, says Giorgi Badridze, a senior fellow at the Georgian Foundation for Strategic and International Studies.

“However, official cooperation with Belarusian KGB is unprecedented”, he adds.

Despite the defensive statements of the Georgian State Security Service, civil society organisations, including the Human Rights House Tbilisi, have said that the implementation of the deal has put the safety of Belarusian nationals in grave danger, especially independent journalists and dissidents who have fled the Lukashenko regime.

The West imposed stronger economic sanctions against Belarus after Minsk hijacked a Ryanair flight from Athens to Vilnius in order to arrest dissident journalist Raman Pratasevich in May. Georgia has yet to take any measures against Belarus, and remains one of few countries with a direct air connection to Minsk.

“Under different circumstances, I would assume that the agreement was a symbolic move to appease Belarus. Unfortunately, after what happened to an Azerbaijani journalist, Afgan Mukhtarli, I could say that the agreement puts Belarusian citizens in Georgia in danger”, Badridze tells Emerging Europe.

Afgan Mukhtarli was an outspoken critic of Azerbaijan’s authoritarian government who had been living in self-imposed exile in Georgia since 2015.

According to Svetlana Tikhanovskaya, the de facto leader of the Belarusian opposition who stood against Lukashenko in last year’s election, only the termination of the agreement between Tbilisi and Minsk can “guarantee the security of Belarusians in Georgia”.

Tikhanovskaya has since written to the Georgian Foreign Ministry, urging it to “not use this agreement to disclose information about Belarusian citizens or engage in any other cooperation that could negatively affect Belarusians residing in Georgia”.

Undermining relations with the West

The Georgian government’s decision to begin implementing the agreement further aggravates the country’s already tense relationships with the EU and US.

These had already been severely deteriorated in July, when the ruling Georgian Dream party backed out of an EU-brokered agreement to end a months-long political stand-off following a parliamentary election last October the Georgian opposition claim was rigged.

A former US ambassador to Georgia, Ian Kelly, has called the agreement with Belarus “shameful”.

He said that by withdrawing from an agreement brokered by the EU and then implementing a deal with the Belarusian KGB, the Georgian government had demonstrated that its priorities could “lie elsewhere”.

Giorgi Badridze says it has once again “undermined the West’s trust in the Georgian government”.

“It has solidified the perception that the ruling party’s real actions contradict its declared pro-western aspirations,” he concludes.