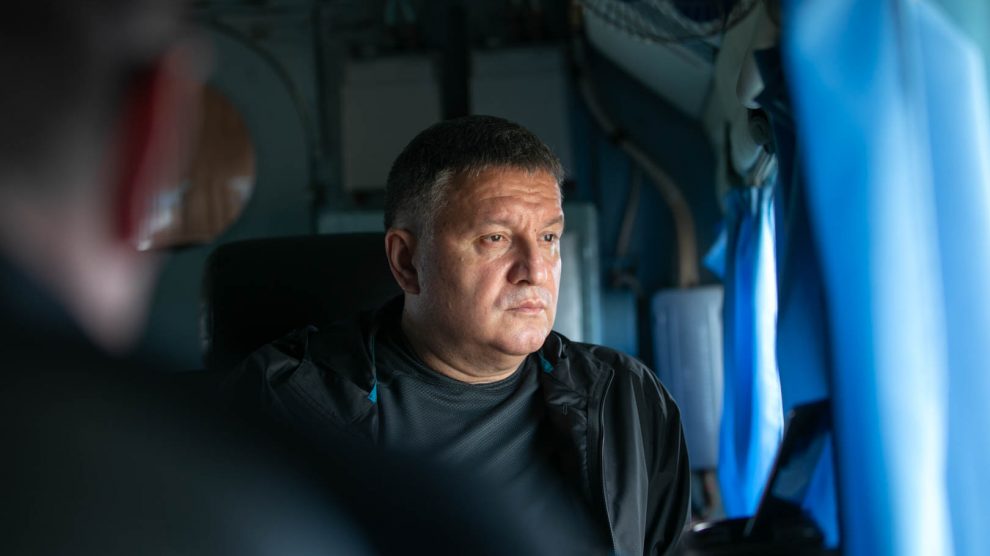 Ukraine’s controversial long-standing interior minister Arsen Avakov resigned on July 13 — to widespread surprise. But many are sceptical about how much will really change.

So ended Arsen Avakov’s brief four-sentence letter to Ukraine’s parliament announcing his resignation. This was the rather anticlimactic end of an era: Avakov had held onto his post for nearly eight years, longer than anybody ever had in his position, emerging unscathed from countless scandals in the process.

A former governor of his native Kharkiv Oblast, Avakov became minister of interior affairs in 2014, following the Maidan revolution. Although Ukraine’s police have long held a reputation for incompetence and corruption, at the time, public confidence in law enforcement bodies was at an all-time low. At the zenith of the protests, officers from the elite Berkut unit opened fire, killing dozens.

Avakov’s resignation was initially welcomed with optimism. In the months following the Maidan revolution, he was instrumental in preventing the spread of the pro-Russian insurrection in the southeast of the country from spreading to Kharkiv. As a part of the new regime that formed after the fall of Yanukovych, Avakov actively promised substantial, comprehensive reforms in law enforcement and the judiciary, both targets of widespread derision in the Ukrainian public.

“Under Avakov we managed to establish a good dialogue with his team,” says Andy Hunder, president of the American Chamber of Commerce in Ukraine. “Whenever there were unfortunate examples of law enforcement going after businesses, we could escalate that quite quickly and we could find ways of dialogue.”

However, despite the early momentum, the process of reform faltered before long. The police force had a cosmetic makeover, swapping their Soviet-style uniforms for more contemporary, westernised alternatives and eschewing the old name of “militsiya” (militia). However, beneath the sleek gear, little appeared to have changed: the force was, after all, staffed with many of the same people who made up the old militsiya.

Violent attacks continued against civic activists, with many of the cases going unsolved. Kateryna Handziuk, an anti-corruption activist who in 2018 succumbed to wounds sustained from an acid attack, is one of them. The perpetrators are yet to be found.

In 2020, a particularly horrific case exposed just how little had changed regarding Ukraine’s law enforcement. Two police officers in the town of Kaharlyk in Kyiv Oblast were charged with repeatedly raping a female witness and, on the same day, severely beating and performing mock executions on a male detainee. Although both officers were arrested and the entire police force of Kaharlyk was dismissed, the incident shocked Ukrainians: even in the pre-Maidan years, this would have been a major scandal. That it happened more than five years after the much-vaunted police reforms contributed to mass disillusionment of the lack of progress on the Maidan promises.

Following the Kaharlyk incident, in June 2020, Ukrainian newspaper Ukrayinskaya Pravda published a special report compiling 64 crimes committed by Ukrainian police officers, ranging from simple extortion to rape and murder. Furthermore, over the course of the Covid-19 pandemic, even when local governments declared full lockdowns, many businesses, including bars and nightclubs, remained open illegally, “protecting” their operations through bribes to individual officers. This undoubtedly hampered the country’s fight against the pandemic.

As such, it would be expected that news of Avakov’s departure would be welcomed by people hoping to see genuine reform. However, the reaction has been mixed.

A good move but…

“It is a step in the right direction because judicial reform has been far too slow under Avakov…For the wrong direction, however, it is widely believed Avakov was pushed out for not supporting Zelensky’s investigations of Poroshenko.”

This refers to how since 2019, former president Petro Poroshenko is under investigation in 21 different cases, with charges ranging from abuse of power to corruption. Many consider these investigations to be politically motivated and initiated by President Zelensky’s inner circle.

Avakov and Zelensky have also reportedly clashed over the investigation into the 2016 murder of Belarussian-born journalist Pavlo Sheremet. The prime suspects in the case are five affiliates of the far-right party Right Sector, several of whom are veterans of the war in Donbas.

It should be noted that Avakov oversaw the organisation of armed detachments, many with far-right inclinations, to supplement the Ukrainian military in its fight against Russia-backed separatists.

“The fact that Avakov survived so much to this point made his ouster definitely a surprise — and the fact that the impetus might have been his reluctance to chase Poroshenko or to interfere in the Sheremet investigation means that rule of law is still problematic in Ukraine,” Hartwell tells Emerging Europe.

With these conflicts in mind, some interpret Avakov’s resignation as a move by President Zelensky to continue consolidating his power. Such views are echoed by Kyiv Post journalist Oleg Sukhov.

“Avakov was the most powerful official independent from Zelensky and his inner circle. So, the balance of power will shift in favour of the President’s Office, which will help Zelensky monopolise power,” Sukhov tells Emerging Europe.

Avakov’s successor, Denys Monastyrsky, also hardly inspires confidence. He is portrayed as a “protege” of Avakov, and a cog in the same lawless system in which Avakov thrived.

Although Monastyrsky has tried to distance himself from his predecessor in 2020, following the Kaharlyk incident, he mildly suggested that Avakov resign. Such moves are interpreted as currying favour with Zelensky and his inner circle, a PR stunt of sorts.

As such, few in Ukraine are holding their breaths. While the resignation of Avakov was long-overdue and much-anticipated, it doesn’t necessarily mean that the conditions which fuelled public discontent against the minister will go away.

“Avakov — a major pillar of Ukraine’s kleptocracy — should have been fired a long time ago. But he should have been replaced with an independent professional with integrity, which didn’t happen. Avakov must also have been prosecuted for his corruption and other crimes and convicted if found guilty. This did not happen and will not happen under Zelensky either,” Sukhov tells Emerging Europe.