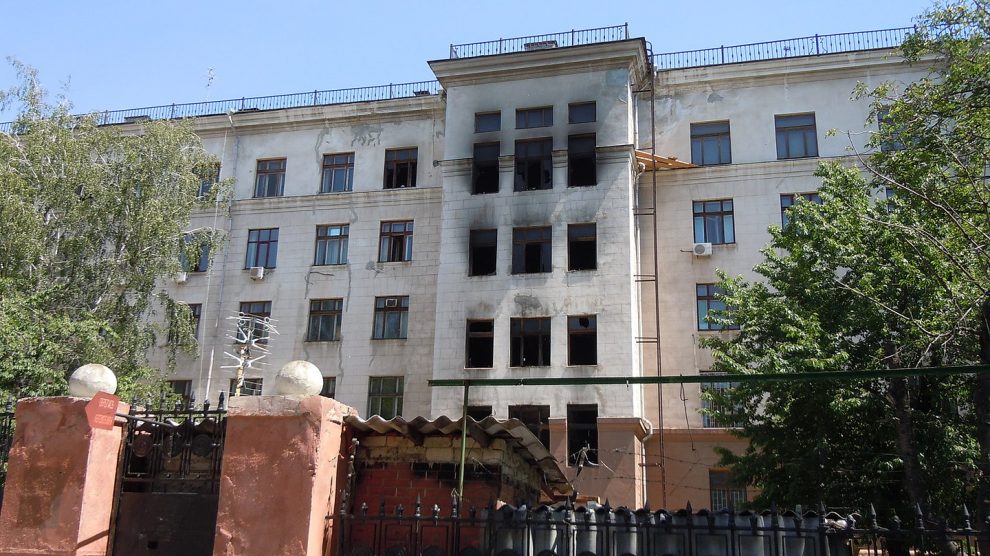 The ongoing lack of justice for the 48 people killed in the Ukrainian city of Odesa on May 2, 2014, makes the event perfect ammunition for Russian propaganda.

May 2 marked the seventh anniversary of violent clashes in the Ukrainian city of Odesa which led to the deaths of 48 people. Of those killed, 46 died in a fire inside the city’s trade union building.

The incident has become one of the biggest stains on post-Maidan Ukraine. The fallout polarised the country. To this day, not a single person has been held accountable for the killings.

The incident attracted little coverage from international media at the time, and even less has been written since.

While this is not perhaps all that surprising, what is more shocking is the lack of attention the incident gets within Ukraine itself.

To understand the clashes of 2014, we need to appreciate the context in which they took place in. Ukraine at the time was gripped by paranoia and anxiety. The Maidan revolution of February 2014 had led to the downfall of Viktor Yanukovych’s government, but only after bloody exchanges between protesters and police killed dozens.

Shortly after, Crimea was invaded by unmarked, unidentifiable soldiers (unquestionably from the Russian military) and subsequently voted in a referendum – whose legality is contested to this day – to join the Russian Federation.

Meanwhile, the eastern region of Donbas was in open revolt and armed, Russia-backed separatists had already taken control of several cities. The population was torn between competing narratives which only further inflamed tensions. Many were alarmed by the heavy presence of ultra-right forces within the Maidan movement, while others were galvanised by the imminent threat of Russian aggression.

These narratives caused two distinct camps to appear. While often portrayed as “pro-Ukraine” on one side and “pro-Russia” on the other, this is an inaccurate picture and has often been used to destroy the credibility of the post-Maidan government’s critics by making them appear to be unpatriotic traitors. Instead, it would be more accurate to say “pro-Maidan” and “anti-Maidan”.

In Odesa, a predominantly Russian-speaking city, rallies had been taking place for weeks before May 2. On the day itself, the situation was particularly tense. Thousands of football fans from out of town had been in the city to attend a match – as anybody who has been to a Ukrainian football game can attest, Ukrainian football ultras are dominated with far-right imagery and ideology. These were supported by a large amount of members of Right Sector, a far-right political party which had been active in the Maidan revolution.

The “anti-Maidan” demonstrators also contained unsavoury elements, including Russian ultra-nationalists. Regardless, on both sides, the bulk of the protesters were unarmed and relatively peaceful – all that distinguished them was their political orientation.

Clashes occurred throughout May 2 and six people – two “pro-Maidan” and four “anti-Maidan” – were killed in exchanges of gunfire.

Exactly what happened next remains unclear and subject to all kinds of propaganda from both sides. What is clear, however, is that a large group of “anti-Maidan” protesters, with many women and children included, ended up sheltering inside Odessa’s trade union building.

The building was then set ablaze, likely by Molotov cocktails thrown by extremists in the “pro-Maidan” camp. The police did nothing as the building burned, nor as Right Sector protesters blocked fire engines from relieving the blaze.

Ukraine’s then interior minister, Arsen Avakov, said at the time: “The police in Odesa acted outrageously, possibly in a criminal fashion. The ‘honour of the uniform’ will offer no cover.”

Disturbing footage from the incident is easy to find. There are videos of “pro-Maidan” extremists shooting at people trying to escape the fire, and bludgeoning to death people who had jumped from the burning building in desperation. Other videos show people in the pro-Maidan crowd egging people on to jump out of windows to their deaths.

Gruesome photos of the aftermath also seem to imply that “pro-Maidan” extremists had managed to kill people inside the building.

To this day an official list of people killed on May 2, 2014, has not been released by the Ukrainian authorities. Several European Union calls for an independent investigation have fallen on deaf ears. The incident is buried in the media and few outside Ukraine know that it happened. Unfortunately, it has also been whole-heartedly co-opted by the Russian propaganda machine, which uses the incident to validate its aggression against Ukraine – this makes it all the more polarising.

However, this doesn’t change the fact that the local media’s response to the incident was by and large disgraceful. To this, Ukrainian columnists, including those writing in English-language, liberal, pro-Western newspapers, maintain that the fire was started in “uncertain circumstances” and blame “anti-Maidan” protesters for initiating the clashes.

Reactions ranged from blaming the victims for their gruesome fates to alleging Russian involvement to even celebrating the deaths as a prevention of another Donbas-style uprising. A common refrain is that shots were being fired from the Trade Union Building, and that this prompted the “anti-Maidan” demonstrators to fight back with Molotov cocktails.

However, just looking at the casualty figures, this narrative falls apart. According to most sources, only two “pro-Maidan” protesters were killed, and those earlier during the day during the running battles between armed gangs from either side on Odesa’s streets.
Presumably, if the extremist “anti-Maidan” protesters had been side-by-side with women and children and pensioners shooting at the throngs gathered around the Trade Unions House, there would have been more than two casualties.

Each year, Right Sector cadres commemorate the incidents by marching through Odesa’s streets. The purpose is clear: intimidating opponents and demonstrating their impunity. That none have been held accountable for what happened – neither the violent protesters nor the police who completely failed to do their job of maintaining order – is even more shameful.

Kremlin propaganda has seized on the incident and uses it to paint Ukraine as a “fascist country”. While this is patently false (the far-right flopped in every election since Maidan), ultra-anationalists and Nazi sympathisers have nevertheless managed to gain some institutional footing, particularly within the armed forces and security services.

Ukraine continues to accept foreign military volunteers, many of whom have visible swastika tattoos and other Nazi-affiliated imagery – in many ways, it has become the white nationalist’s Syria in terms of attracting volunteers for combat experience. Such practices, in combination with the lack of justice over the May 2 clashes, unsurprisingly make it all too easy for Russian propaganda to peddle misleading at best or utterly false information at worst. During the recent build-up of Moscow’s forces on the Ukraine-Russia border, separatists units filmed Wehrmacht flags flying over Ukrainian positions.

That May 2 attracted little international media attention beyond scant news reports is troublesome. Whenever a country (particularly a non-Western country) finds itself in the crosshairs of the international media, there are always reasons why one story gets attention and another doesn’t. Of course, this is an issue with all media: Russian media focuses on May 2 while ignoring the atrocities of its proxies in Ukraine (and still denying the presence of their own troops).

Western media is seen as inherently more reliable, objective and independent than any, and escapes the scrutiny that people (rightly) give to non-Western media sources. If something goes unmentioned in the publications of New York, London, Berlin or Paris, it may as well have not happened.

But the horrific events of May 2 in Odesa did happen. And as long as the Ukrainian government fails to do its duty to its citizens who lost their lives in the clashes, this will remain a stain on the country’s democratic future.