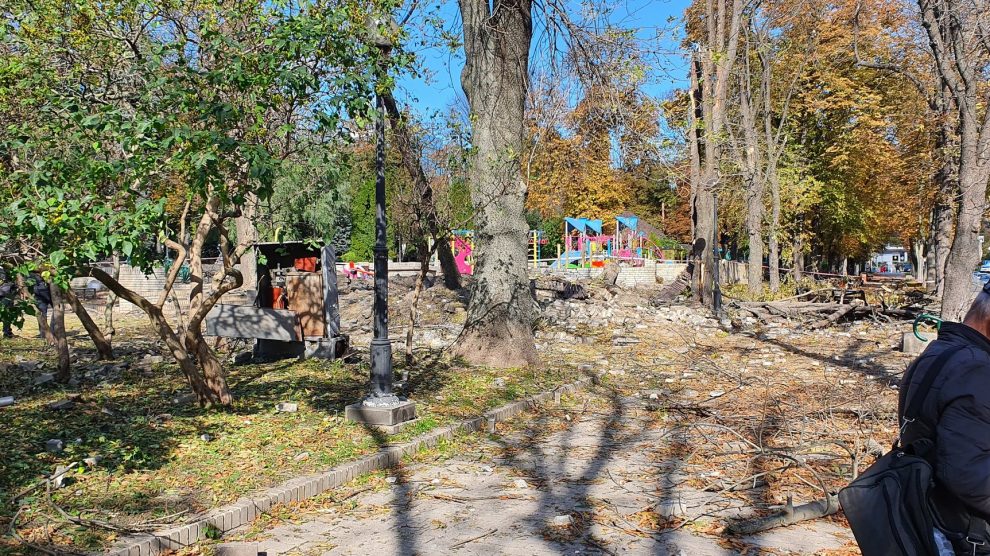 A wave of Russian missile attacks on Kyiv and several other Ukrainian cities was timed to inflict the maximum number of civilian casualties.

Kyiv was targeted by Russian missiles on the morning of October 10, the first time in many months that the Ukrainian capital has come under attack. Many other cities across Ukraine, including Lviv in the far west of the country, were also hit.

The Russian attacks were timed to coincide with the morning rush hour in order to inflict the maximum number of civilian casualties. At least eight people were killed in Kyiv, and many more seriously injured.

Ukraine’s air force spokesman, Yuriy Ihnat, said Russia launched 83 missiles – and more than 43 had been shot down by air defences. The missiles, he added, including Kalibr, Iskander and Kh-101, launched from the Caspian and Black Seas.

The attack comes just two days after the strategically-important Kerch Strait Bridge, which links Ukraine’s occupied Crimean peninsula to Russia, was damaged in a massive blast. Ukraine has not claimed responsibility for the explosion on the bridge, but senior Kremlin officials had called for retaliatory action.

On October 9, Russia’s president Vladimir Putin described the attack on the Crimean bridge as an “act of terror”. Russia has now responded by targeting civilians and civilians infrastructure, in what appears to be a direct act of retaliation with no military purpose.

“Now some areas are cut off. It is necessary to be prepared for temporary interruptions of light, water supply and communication,” he said.

Shortages of power and water were reported by officials in the cities of Lviv and Kharkiv, and the regions of Khmelnytskyi, Sumy and Ternopil.

In a statement to Russia’s security council shortly after the strikes, Putin said that they had been conducted with “high precision” weapons against “energy, military and communications targets”.

But evidence on the ground points to civilians also being targets.

In Kyiv, which saw bombing for the first time since June, a children’s playground and a popular suspended walkway in a city centre park were targeted. The German consulate was also reportedly damaged, although it is not yet known if it was subject to a direct strike or impacted collaterally.

“Russia is trying to wipe us off the face of the earth. Such a time and such targets were specially chosen to cause as much damage as possible,” said Ukraine’s President Volodymyr Zelensky, who once again made a point of filming himself out on the streets of Kyiv as the bombing continued.

NASAMS on the way, but when?

The attacks have led to a new wave of calls in Ukraine for the supply of modern, Western missile defences.

Kaja Kallas, Estonia’s prime minister and one of Ukraine’s most fervent supporters among EU members, said that Russia’s latest acts of terrorism made “more acute” the need to establish a tribunal for crimes of aggression, and added her own voice to calls for better weapons.

Last month the United States promised to supply the sophisticated National Advanced Surface-to-Air Missile System (NASAMS) air defence to Ukraine, but did not stipulate when the first units would be delivered.

The new attacks on Ukrainian cities have also prompted an urgent round of diplomatic developments.

Zelensky said that he had agreed with German Chancellor Olaf Scholz on the need for an urgent meeting of the G7 countries.

Zelensky added that he had also spoken with French President Emmanuel Macron. “We discussed the strengthening of our air defence, the need for a tough European and international reaction, as well as increased pressure on Russia.”

In the UK, the security minister, Tom Tugendhat, branded the attacks on Ukrainian cities “war crimes” while the foreign secretary, James Cleverly, said they were “unacceptable”.

“This is a demonstration of weakness by Putin, not strength,” added Cleverly.

“It shows the world, again, the regime we are faced with: One that targets indiscriminately. One that rains terror and death down on children. This is criminal. They will be held to account. Ukraine will win. Europe will not look away.”

Photo: A Kyiv playground after the attack on October 10. John Sweeney.