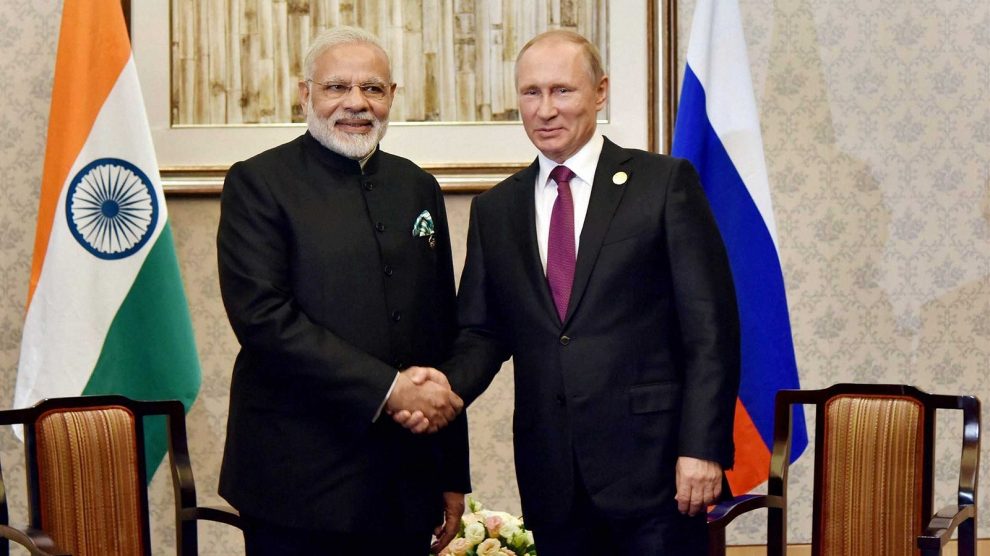 Western-led efforts to court the world’s largest democracy will not fly so long as dictates are imposed on New Delhi with imperialist undertones.

As a founding member of the non-aligned movement, India has unsurprisingly opted to sit the Ukraine conflict out and shy away from overtly condemning the aggressor.

In all fairness, the West has not done itself any favours by exerting undue pressure on the Indian government to pick sides. The predicament India finds itself in as a result of the ongoing war is much more intricate than a mere black and white scenario.

Admittedly, lndo-Russian ties do no justice to the hype over their supposed “special and privileged strategic partnership”. The volume of bilateral trade amounted to less than eight billion US dollars in 2019, which is a pittance considering the nominal size of their economies and how often their respective heads of state hold tête-à-têtes.

Rest assured that this relationship is wholly transactional, with nothing concrete to show for in the way of multifaceted cooperation or cross-cultural engagement.

India remains a key client state of Russia’s Military Industrial Complex, in that nearly 70 per cent of its arms and spare parts are imported from Moscow. Despite emerging dangerously beholden to a single supplier for national security, there is little appetite on the part of its defence ministry to rock the boat amid a two-pronged threat from neighbours China and Pakistan.

In a sense, India’s addiction to Russian-made hardware is as toxic and arduous to wean itself off as the European Union’s helpless reliance on Russian gas.

In light of the unresolved border dispute with China, the Indian public takes to the school of thought that Russia plays an indispensable role in keeping the Chinese at bay. Russian weapons manufacturers and dealers have a vested interest in any tensions flaring up between the two most populous countries, given the extent to which they profit from long-term, multi-billion dollar contracts borne out of pure paranoia.

Pakistan’s ex-Prime Minister Imran Khan was in Moscow on the first day of the incursion, which goes to show that Russia is an unfaithful ally playing a double game to line state coffers.

Russia is also a menace to, rather than a guarantor of, pan-Asian regional stability. Its contrivance in coming across as a well-meaning mediator at futile groupings like BRICS and the Shanghai Cooperation Organisation (SCO) simply overshadows the chaos being sown behind the scenes.

If anything, the invasion of Ukraine has emboldened China so profoundly that Taiwan and Hong Kong are now seen as small fry relative to taking on India. Having recently penned a “no-limits” agreement with the People’s Republic, it is clear who the Russians will gravitate towards if ever push comes to shove.

On the ideological front, Russia and India happen to be polar opposites. At one end of the geopolitical spectrum is peace-loving and freedom-cherishing India which brought Buddhism, Yoga and Mahatma Gandhi to the world – all synonymous with preaching non-violence and spiritual serenity. Meanwhile, Russia remains a glorified police state hellbent on ruthlessly crushing dissenting voices at home and abroad while using brute force to decoy sovereign nations into its ever narrowing sphere of influence.

As the Russia-NATO tug of war to coax India into either camp plays out, it is unlikely that the latter will shift gears anytime soon. For staters, tacitly framing this war as a clash of democracy versus autocracy has failed to strike a chord. While India still sees itself as an intrinsic part of the free world, bringing the bloodbath in Ukraine to an end is about being on the right side of history rather than identifying with a certain governance model.

Some western powers exhorting India to abandon its neutral position incidentally have themselves to blame for financing Putin’s war chest over the course of the past few decades. The fact that a number of these nations resort to neo-colonialism as a means of rallying third countries does not help their cause either.

From India’s standpoint, the Brits, French and Germans need to get off their high horse and cease

condescending a developing country that puts the needs of its people above all else.

Insofar as the United States is concerned, the days of mercilessly sanctioning those who do not toe the American line are long gone. Be it Russia or Iran, history has proven that any country at the receiving end of outdated cowboy tactics finds ways to skirt around embargoes and become self-sufficient. For all its faults, Russia has launched an astute charm offensive across the Global South by peddling the narrative that their special military operation paves the way for a more balanced world order.

Needless to say, buying into the notion that a power-hungry and expansionist Kremlin will settle for a level playing field in this post-conflict epoch is the height of naïveté. India is no exception to the host of developing countries that have sought comfort in not continuing to be under the thumb of the West indefinitely.

Having said that, it is anyone’s guess how much better off they would be inhabiting a Russian-dominated world bereft of civil liberties, respect for humanity and socio-economic progression.

Make no mistake, the Cold War is still very much alive and well albeit taking shape in the information age with greater emphasis on cyber penetration as well as soft power to advance conflicting agendas.

The fact that the Russian government is prepared to haemorrhage its ill-gotten gains on an ego-driven war and throw its own citizens under the bus for the sake of showcasing national military prowess serves as a prototype of the future they envision.

The “Lisbon to Vladivostok” proposal for a Greater Europe has two starkly different interpretations depending on which city one finds themselves in. At a time of far less friction between Russia and the EU, this initiative was originally embraced by Brussels to healthily offset the meteoric rise of China and the four Asian Tigers. In Moscow, however, it was a cue for both territorial and philosophical enlargement with the Eastern bloc as the unequivocal starting point.

Much like any other former colony which struggled long and hard for independence, India does not take well to external actors passing judgment on its domestic affairs and foreign policy decisions.

Sensitivities to colonial rule are so deeply entrenched that getting sucked into the Western fold as it endeavours to isolate Russia from the international community remains out of the question. By virtue of making good on their pledge to support Ukraine to the hilt coupled with knowing all too well what life under occupation is like, emerging Europe has a serious shot at helping India see the light.

The CEE region has, for the most part, stuck to its guns and demonstrated incredible selflessness by compromising its own standard of living to uphold the cornerstones of European identity. It is praiseworthy that these nations are willing to endure an exceptionally harsh winter in order to safeguard democracy throughout the continent, not to mention coping with skyrocketing prices and sheltering millions of Ukrainians in private households as opposed to inhumane refugee camps. This altruism lends credence to calls for other like-minded countries such as India to join hands in restoration of a free Ukraine.

Granted, there are outliers like Hungary and Serbia who have stopped short of participating in the sanctions campaign against Russia. However, as more and more Russian tourists head to arguably the only two countries in the continent where they are still welcomed, their true colours will become apparent. At the end of the day, it is the masses who prop up the Putin regime and show little remorse for the atrocities committed in a country where many of them incidentally have first-degree relatives. As for those fleeing on humanitarian grounds, it is somewhat puzzling why they choose to take a long-winded route to the EU when they enjoy visa-free access to 120 other nations.

While India has never thrown its weight around on the international arena, it ought to be more assertive in the wake of potential nuclear armageddon. Sitting idly by and allowing Kyiv to fall is not an option for an aspiring superpower, no matter the cost of partisanship vis-à-vis Ukraine.

As alluded to earlier, trade links between India and Russia are primitive at best. By distancing itself from Moscow until the war subsides, New Delhi would be making a statement stern enough to win over new partners in emerging Europe who can fill the ensuing vacuum while sharing a clear affinity for each other’s way of life.

The silver lining of this war is that contrary to the prism through which much of the outside world views Europe, the continent is not confined to just a handful of “legacy brand” western countries. The new kids on the block, practically all of whom are situated in the East, have a much greater sense of purpose in shielding Europe from malign influences. To that end, there is no conceivable reason why India should not start cherry-picking strategic partners like Poland, Czechia and the Baltics in lieu of dealing with the EU as a monolithic entity.

Aside from having sounded the alarm over Russia setting its sights firmly on one of them subsequent to Ukraine, the member states of emerging Europe are equally circumspect about entertaining China’s “sugar daddy” diplomacy. A noteworthy example is Lithuania, which went ahead in de facto recognising Taiwan to the displeasure of the Chinese Communist party.

This is, by no means, a one-off case as more nations in the immediate vicinity will start seeing through China’s quest for political leverage and look to deepen dialogue with India instead. In turn, it is high time India took heed of how the continental wind blows and assigned emerging Europe a comparatively greater weighing than their western counterparts have been allotted.