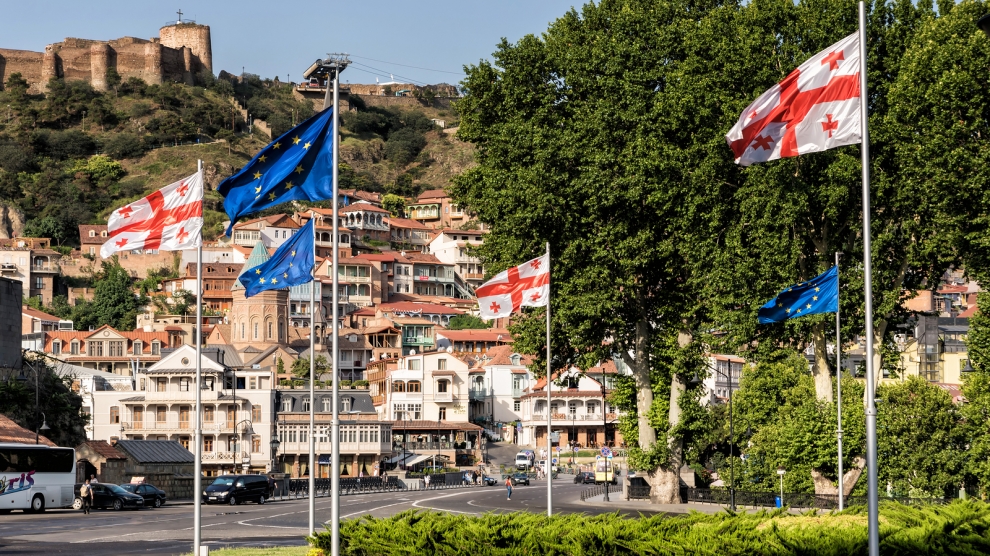 In May 2005, speaking to an enthusiastic crowd in Tbilisi, Georgia’s capital, then-US President George W. Bush hailed the country as a “beacon of democracy”. Since then, however, Georgia’s trajectory has changed.

The Greek statesman Alcibiades cut off his dog’s tail so the public would talk about the animal’s deformity, rather than his incompetence. It is the oldest trick in the book for desperate politicians: to divert public attention from reality to something irrelevant while trying to confuse everyone.

In this regard, the latest strategy by Georgia’s ruling party, Georgian Dream, consists of writing antagonising statements and letters about the United States and the European Union in a deployment of writings where they use the weakest evidence to hide their unforgivable purpose.

However, they reveal to us their real nature: national populists who refuse to accept the new realities, instead trying to impose their alternative and anachronistic narratives, manipulating the past and rewriting the facts.

These “authors” have only just stopped short of asking for the “denazification” of the US and the EU and the need for a “special military operation” to make their intentions and their origins 100 per cent transparent.

On June 23, the European Union declined to grant Georgia candidate status, an important step towards full membership. Two other ex-Soviet countries, Ukraine and Moldova, did become candidates. All three of our countries had developed relations with the bloc at a similar pace. In 2014 we all signed association agreements with the EU to encourage political collaboration and economic integration. More than 80 per cent of Georgians want EU membership and last month’s setback sparked anti-government protests in Tbilisi, the capital.

Where Ukraine and Moldova became candidates, Georgia was made lesser offer: a membership “perspective”, meaning it can also become a candidate if it fulfills certain conditions, such as a commitment to “de-oligarchisation” of the state system before the end of the year (now postponed to mid-2023).

Five or six years ago, that would have been a surprise: Georgia seemed to have the clearest route forward. But today, a polarised and resentful governing class has left the country further from accession to the EU than its counterparts.

The country’s pugnacious prime minister, Irakli Garibashvili, lashes out at European and US officials when they dare to criticise his government’s actions. Among the 12 conditions the EU has asked Georgia to meet to qualify for candidate status, it specifically mentions polarisation – reference to Georgia’s toxic political culture – as an obstacle to the country being given candidate status.

Yet, speaking in parliament just after the European Commission published its recommendations for Georgia, Garibashvili doubled down and called opposition politicians “traitors”, “enemies”, and “maniacs”.

Let me be clear: the EU assessment of Georgia’s membership status should not be presented as a clash between the US/EU and the people of Georgia. Instead, it was the decision of core democratic countries denouncing Georgia’s flawed democratic sovereign government, ruled behind the scenes by an oligarch with alleged Kremlin ties. In the balance are the actual dreams of the Georgian people for a democratic government free of oligarch rule.

‘It is my duty to ask forgiveness’

I deeply regret those letters. It is not clear how I should say sorry, when whilst essential, it is not actually my fault. However, in the name of the citizens of Georgia, it is my duty to ask forgiveness to our friends and partners in the United States and the European Union.

In contrast to our government, these are not empty words: I promise that I will dedicate all my efforts as a member of the Georgian parliament and one of the leaders of the opposition party to make sure that hate speech will be totally forbidden; ultranationalist ideology will be monitored after the next election; and paranoia and propaganda will not be a basis to rule this country.

Some people subordinate their political beliefs to facts, failing under the confirmation bias, because being wrong and guilty is neurologically unpleasant. In the above-mentioned letters, anti-American imperialism is a place where Vladimir Putin’s proxies discern motives for their actions and its consequences, finding relief blaming the same they despise. We could say that the Wall fell in Berlin, but not in the feeble minds of the Georgian Dream party.

They have decided to blame the US and the EU for the damage they inflicted on Georgia by themselves. A better course of action would have seen both the prime minister and the president of Georgia apologise for their mistakes: mistakes which have delayed Georgian integration into the EU.

Most importantly, they need to soundly reject being puppets for an oligarch with Russian affiliation.  Finally, they need to guarantee our security, rather than attack the only ones who will protect us.

We, as representatives of the people of Georgia, truly apologise for this madness, where the US and the EU are said to be plotting against us. In fact, those global actors are, rather trying to destroy, trying to support it. We can promise today as well, that we will not rest until Georgia becomes part of the Western family. We also dare to ask you: Please, do not follow the Georgian Dream purpose and turn your back on us. The will of the Georgian population is resounding.

Georgia is not a Soviet satellite anymore, but since 1991, a sovereign state. Subsequently, under the rules of the current world order, it can take any decision whatsoever as long as it respects rule of law, whether any other expansionist state likes it or not. Every country has the right to choose its own destiny, joining any economic, political, cultural or military organisation.

Accordingly, we, the Georgian people, request that international law be fully applied in Georgia and in our neighbouring countries and territories, especially international criminal law (the Rome Statute) and international humanitarian law (the 1949 Fourth Geneva Convention on protecting civilians in conflict and the 1977 and 2005 additional protocols), which govern the relationships between states, international crimes – genocide, war crimes, crimes against humanity, and aggression – and the effects of armed conflicts.

The drive of the citizens of Georgia is clear: joining the West and its political organisations, such as the European Union or the North Atlantic Treaty Organisation (NATO). The Georgian people have proved that we are burden-sharing partners. We were the largest non-member contributors in Afghanistan (NATO mission) and Central Africa (EU mission). Our men and women in uniform sacrificed their lives for the better future of our common Euro-Atlantic family.  We believe that a better future is possible. Actually, our only possible future is based in joining the West.

Do not blame the US, the EU or anyone else

In the meantime, the current government of Georgia acts as if we still belonged to the Russian sphere of influence. We have heard over the last 10 years enough pitiful calls to relax, the dreadful Georgian Dream position, interpreting again our neighbourly relations from pure submission. If you are against their approach, you “polarise”.

On the other hand, the several signatories and their administrators should address the Georgian population and any other recipient, only to say sorry. To express that their way from now on will be negotiations, diplomacy, politics, international organisations, international law, rather than unveiling private meetings, or applauding each other’s preposterous communications. They should listen to the Georgian population’s cry: the Soviet empire collapsed, and we want to join NATO to protect ourselves from its ruins.

The Georgian Dream is still comfortable under Russian management. But we, the Georgian population, are not. We ask today, once again, our right to make our own decisions without any historical anchors. There is a fact: all the former countries which were under the Soviet influence, with no exceptions, have significantly developed since they joined the West. We want the same for our beloved country.

No one in Georgia has forced Irakli Garibashvili and his supervisor into his appeasement approach towards Russia. No one therefore should blame the US, the EU or any others, but to admit their guilt and beg for our pardon. They can pretend that everyone is blind, with one-sided arguments, claimed inaccurately, distorted. But, we, a small but proud country, will keep our fight, together with our allies and remembering the words of The Bard:

“From this day to the ending of the world,

But we in it shall be remember’d;

We few, we happy few, we band of brothers”.

Nona Mamulashvili is a Georgian MP for the opposition United National Movement.

What can hold the emerging European-Gulf Arab partnership together?
Russia cannot be trusted
Comment