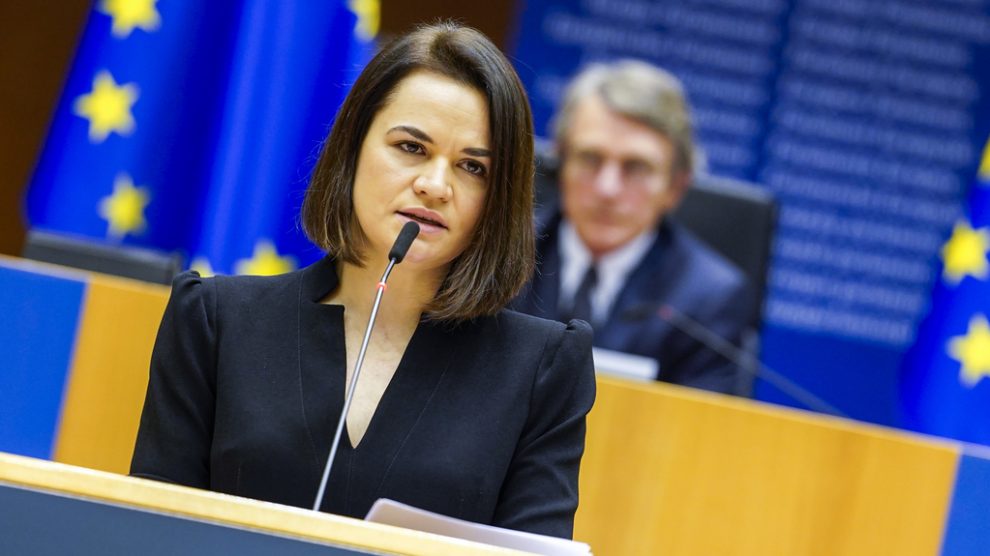 Svetlana Tikhanovskaya’s unswerving commitment to bringing about democratic change in Belarus, despite being forced into exile and despite the imprisonment of her husband, is an inspiration to people across the world.

The leader of the Belarusian opposition movement Svetlana Tikhanovskaya has been named by Emerging Europe as its Public Figure of the Year.

The wife of jailed YouTuber Sergei Tikhanovsky, Mrs Tikhanovskaya rose to global prominence last summer when she replaced her husband as the Belarusian opposition movement’s candidate for the country’s presidency.

“I am extremely honoured and humbled to receive the Public Figure of the Year Award,” says Mrs Tikhanovskaya. “The work that Emerging Europe is doing – putting spotlight on a region that is often misunderstood and underrepresented – is extremely important. We need more subtle and in-depth reporting on Central and Eastern Europe, and we know what serious risks and dangers journalists encounter doing their job.”

Almost eight months have now passed since the authoritarian leader of Belarus, Alexander Lukashenko, had himself declared the winner of a presidential election, officially taking more than 80 per cent of the vote.

By any objective measure, however, Lukashenko lost the election to Mrs Tikhanovskaya, who only stood for the presidency after the candidacy of her husband was annulled.

Mr Tikhanovsky remains in jail in Belarus pending trial for fraud charges that he denies, and which he claims are politically motivated.

Other potential rivals of Mr Lukashenko, who has been president of Belarus since 1994, suffered the same fate, including Viktor Babaryko, the former head of a major Belarusian bank. Mr Babaryko was arrested in June of last year – also on fraud charges – and denied the opportunity to run against Lukashenko in August election.

Valery Tsepkalo, the founder of the Belarusian High-Tech Park and another potential rival to Mr Lukashenko, was prevented from running on the grounds that he had failed to collect the requisite number of signatures to support his candidacy in the allowed time frame.

That Mrs Tikhanovskaya made it on to the ballot paper at all was therefore a major surprise and testament to her unswerving ambition to bring about genuine democratic change in Belarus. The only other candidates were allies of Mr Lukashenko whose presence was solely to offer a fig leaf of democratic respectability.

She quickly became a focal point for the Belarusian opposition, attracting large crowds to her election rallies, despite the Lukashenko regime forcing her to hold them in remote locations far from the centre of Minsk and other Belarusian towns and cities.

In the days immediately following the election she was forced into exile in Lithuania, but huge protests calling for a new, free and fair election continued inside Belarus.

Bringing an end to injustice

“When I joined the presidential campaign in the summer of 2020, I was frightened but I wanted to help,” Mrs Tikhanovskaya tells Emerging Europe. “I wanted injustice to come to an end. How surprised I was to see a wave of solidarity and support throughout the country. We have mobilised hundreds of thousands of people – looking in the same direction and sharing the same aspirations.

“Together we have shown the world what power participatory democracy can unleash. My only role as a leader is to listen to people, to make their voices heard and to harness the power of collective intelligence.”

She has since then continued to lead the opposition movement and has kept up the pressure on the international community to make Lukashenko a pariah, making multiple visits to meet with world leaders and addressing international institutions including the United Nations and the European Parliament.

However, international condemnation for the brutal way in which Mr Lukashenko’s security forces have put down the protests against his regime – more than 35,000 people have been arrested, and just last week two journalists were jailed for covering the protests – has so far been muted.

There was a new round of arrests on March 25, an unofficial public holiday marking Belarus’ 1918 declaration of independence and the short-lived Belarusian People’s Republic.

“Leading news sites are blocked, TV channels are under total control of the state, hundreds of journalists are being threatened, intimidated and arrested. At least 18 criminal cases have been initiated against Belarusian journalists. Three journalists have received prison terms – among them Daria Chultsova and Katsiaryna Andreeva. They were sentenced to two years in prison for live streaming protests against the murder of Raman Bandarenka, a peaceful protester brutally beaten by the police for defending our national symbols. They knew they would be a target of the state repression machine, and nevertheless they decided to do their job. 75,000 people watched their stream.

“My heart is bleeding reading their stories – young, courageous, truth-seeking. We need Daria and Katsiaryna to hold those in power accountable, to tell true stories of people’s lives, their struggles and aspirations. It is for them that we need to continue our fight for justice, peace and democracy.”

‘Let us shake off the fear’

While the European Union, the United Kingdom and the United States have so far offered support for the Belarusian opposition, and have imposed some personal sanctions against leading figures within the Belarusian regime, Mr Lukashenko appears set on clinging to power at all costs.

He recently set in motion constitutional changes that would cement power in the hands of the presidency, saying on March 30 that “it is important to preserve strong presidential authority”, and that “the president must keep his basic authority to influence any decision at any level”.

“If we strip the president of his strong powers, the country will be lost. It will cease to exist,” he added.

Mrs Tikhanovskaya is nevertheless determined to fight on.

“Belarus has dared to rip off the chains of authoritarianism and is longing for freedom,” she says. “We are now experiencing a spiral of extreme violence and repression. Belarusian society is suffocating. I am everything but naïve: these are the darkest days in our country’s independent history. But I know, we know that the darkest hour is just before dawn. I truly believe that with the concerted efforts of the international community we will be able to change the course of history in Belarus.”

The Emerging Europe Awards 2021 is the fourth edition of a programme which showcases the best of the emerging Europe region: individuals, public and private organisations as well as projects and initiatives. Previous laureates include Kristalina Georgieva, the managing director of the International Monetary Fund, European Public Prosecutor Laura Codruţa Kövesi, and Professor Günter Verheugen, a former vice president of the European Commission.

“Europe should be the leading voice advocating for the fundamental values and freedoms,” adds Mrs Tikhanovskaya. “As former Vice President of the European Commission Günther Verheugen said when receiving this award in 2018, ‘We need more Europe and not less’. And today more so than ever.

“Let us shake off the fear. Let us be ambitious, courageous and daring. Let us be advocates of democracy and freedom.”