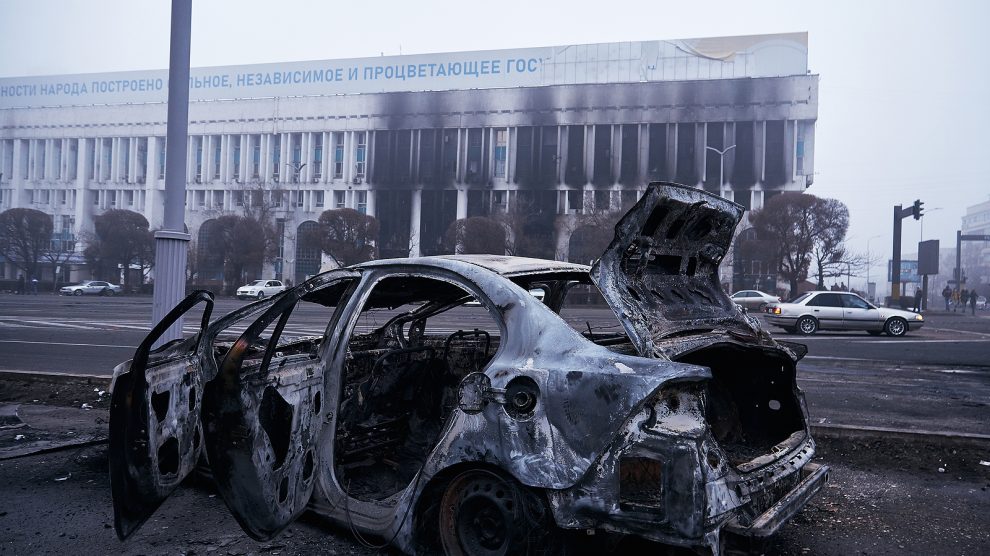 New legal analysis reveals several serious breaches of the constitution of Kazakhstan by the authorities during the tragic events of January 2022.

During January’s turmoil in Kazakhstan, peaceful civic protests devolved into disorder, looting, and a violent crackdown by the authorities resulting in at least 227 deaths. Even if that official number is accurate, and it is likely far higher in reality, this was the most significant loss of life Central Asia has seen since gaining independence from the former Soviet Union. With the international community fixated on the Russia-Ukraine crisis, this tragedy passed largely unnoticed.

Kazakhstan has two bodies in place to ensure peace and stability: the Security Council and the National Security Committee (NSC). As part of its urgent response to the protests, the president of Kazakhstan, Kassym-Jomart Tokayev, implemented a rapid reshuffle in these upper echelons of power by unilaterally changing their chairmanship. This was the first of several steps he took which new legal analysis reveals to be a clear breach by the authorities of the constitution of Kazakhstan.

Article 1 of the 2000 Constitutional Law of Kazakhstan – prior to rapid changes pushed through earlier this year – set out that the country’s first president, Nursultan Nazarbayev, had the right to head the Security Council for life.

Article 1.3 of the 2018 law on the Security Council, which was also urgently amended in February 2022, stipulated that its composition is formed by the President of the Republic of Kazakhstan upon consultation with the Chairman of the Security Council.

In January, President Tokayev conferred upon himself the powers of chairman of the Security Council, setting a new precedent of additional power being concentrated within the hands of one decision-maker. The fact that this amendment to the 2000 Constitutional Law of Kazakhstan was retrospectively approved by the country’s parliament weeks later, likely under significant pressure, provides little reassurance.

Protocol regarding the chairmanship of the NSC was also brushed to one side amid the turmoil of that first week of January 2022. Article 44.4 of the constitution of Kazakhstan stipulates that the head of the NSC can only be appointed following a vote in the enate, the Kazakh parliament’s upper chamber. Presidential Decree No.747 of 6 January 2022 on the appointment of Ermek Aldabergenovich as chairman of the NSC did not refer to any consent from the senate being sought or received.

Given these bodies are charged with protecting the constitutional order of the country, coordinating the government’s activities in the security and defence spheres, and ensuring the safety of Kazakhstan and its citizens, these breaches of the constitution and the legislation in force at the Security Council and NSC could have seismic implications for Kazakhstan, its international relations, and its reputation for stability.

The subsequent issuance of a ‘shoot to kill without warning’ order by the newly-empowered President Tokayev on January 7, 2022 demonstrates why the separation of powers is such an important principle of a functioning and responsible sovereign nation.

One can have little doubt that both the Security Council and NSC under their former chairs would have offered more of a challenge to a presidential order that posed a direct and mortal threat to innocent citizens.

Similarly, the decision to open Kazakhstan’s borders to foreign and predominantly Russian troops – albeit under the banner of the Collective Security Treaty Organisation and in a purportedly ‘peacekeeping’ role – should invite scrutiny and may in of itself represent a further constitutional breach.

At the very least, questions will be asked by the likes of the European Union and Council of Europe – who agreed a much-heralded ‘Rule of Law’ programme in 2019 with Central Asian countries that covers respect for human rights and rule of law – as well as by the US senate through the lens of its Magnitsky Act.

A president’s ultimate duty is to sacredly observe and uphold the constitution. Situations whereby a president violates constitutional norms and the laws of the land cannot be tolerated. The reshuffle of power in Kazakhstan two months ago and the subsequent threat to Kazakhstan’s own citizens undermine the letter and spirit of the constitution, the rule of law, and by extension our confidence in the application of this law to other parties – including those who remain arbitrarily detained following the unrest.