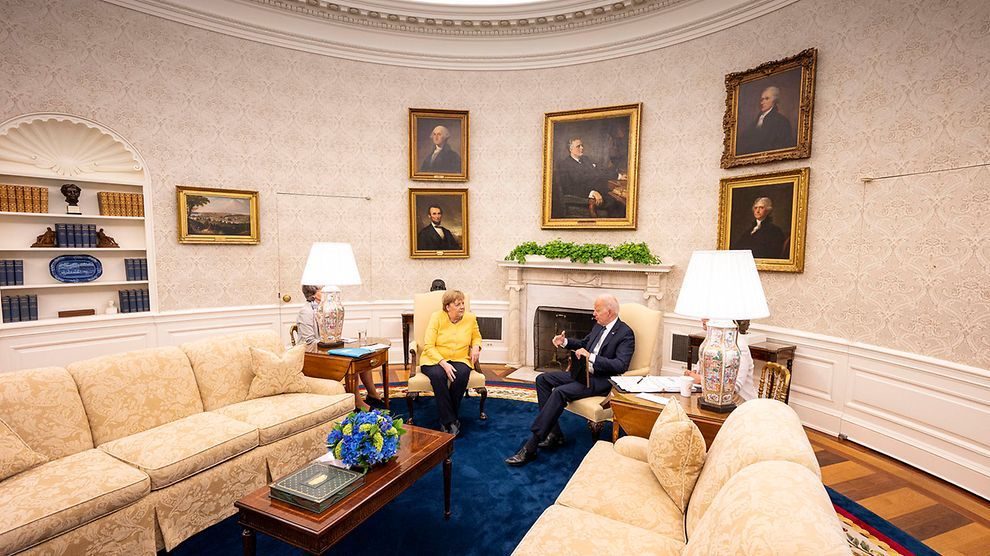 In their agreement, the Americans and Germans stated that they would continue to support Ukraine’s sovereignty and territorial integrity via the Normandy Format. They would also support the Three Seas Initiative.

Furthermore, the US and Germany stated that they would continue to hold Russia accountable for its actions. If the Russian Federation were to meddle in Ukraine’s affairs, the US and Germany would implement new sanctions. Finally, the United States and Germany declared that they are committed to helping Ukraine extend its gas transit contract with Russia beyond 2024. They will invest 50 million US dollars in Ukrainian green-tech infrastructure, and they will support Central and Eastern Europe’s transition to clean energy.

The statement issued by the United States and Germany surprised the globe. For months, American members of Congress tried to persuade the Biden administration to stop the pipeline. Their efforts, however, came to no avail. Several countries within the European Union have also opposed the pipeline.

Meanwhile, Ukrainian and Polish officials were left puzzled by the U.S.-German statement. Ukraine and Poland have the most to lose from a completed Nord Stream 2, but they were not involved in these negotiations.

The foreign ministers of Ukraine and Poland then issued a statement of their own. In their response, Ukraine and Poland stated that Nord Stream 2 would threaten Europe’s political, national, and economic security. The pipeline would increase “Russia’s potential to destabilize the security situation in Europe,” which would cause a rift in NATO and the EU. The Ukrainian and Polish foreign ministers then concluded their text by stating that they will continue to work together as they try to stop the project.

Critics of the US-German deal have referred to it as a “second Budapest Memorandum.” In 1994, Ukrainian officials met with the leaders of the United States, United Kingdom, and Russia to discuss the disarmament of Ukraine. During their meeting, the Eastern European state willingly gave up its nuclear arsenal. In exchange, the US, UK, and Russia stated that they would guarantee Ukraine’s sovereignty and territorial integrity.

20 years later, Russia illegally annexed the Crimean Peninsula. It then launched a military incursion into eastern Ukraine. While the West implemented sanctions to punish Russia for its behaviour, the Donbas conflict persists to this day.

Given the outcome of the Budapest Memorandum, Ukraine is now sceptical of the US-German deal. However, there still may be time to stop Nord Stream 2.

First, Ukraine and Poland should do everything they can to stop the pipeline. While 98 per cent of the project has been built, these countries can still call upon their allies to sanction the companies associated with Nord Stream 2. Implementing new sanctions would prevent these companies from laying the additional pipeline. Ukraine and Poland also understand the security risks posed by Nord Stream 2. They must stress to their allies that Europe would become more reliant on Russian gas. Russia would also gain an energy monopoly over Europe.

Second, Ukrainian President Volodymyr Zelensky’s visit to Washington presents him with an opportunity to call for additional assurances from the United States. Although the US-German deal outlined various economic and energy provisions, very little was mentioned about Ukraine’s national security. Instead, Zelensky should push for Western integration. If the US were to help Ukraine join NATO and the EU, this would go a long way. Implementing such a strategy would help this Eastern European state establish the security it needs to become a truly democratic state.

Third, the US and Germany should provide tangible provisions. Currently, the agreement reads that the US and Germany will “promote and support investments of at least 1 billion US dollars in the Green Fund in Ukraine,” and that “Germany will provide an initial donation to the fund of at least 175 million dollars.” Rather than promising to “promote and support” these options, the US and Germany should help construct the infrastructure needed for these green alternatives. Financing renewable energy in Ukraine and Poland would help them ease their dependence on Russian gas. This would also present them with a new source of revenue.

Overall, the US-German deal is a big blow to Europe’s energy and national security. A completed Nord Stream 2 would give Russia additional leverage over Europe as it would control the flow of gas to the continent. It will also give Russia an energy monopoly over Europe. This could lead to further Russian meddling in Ukraine and Poland.

But not all is lost. If Ukraine and Poland were to rally their European allies, and if new sanctions were to be implemented against the companies laying the pipeline, then the project may be stopped. The odds may not be in their favour, but Ukraine and Poland have to try. The fate of Europe depends on it.

How a year at home changed the real estate market globally and in Ukraine
Could Russia’s expansion in the Caucasus inflict instability in Europe?
Comment