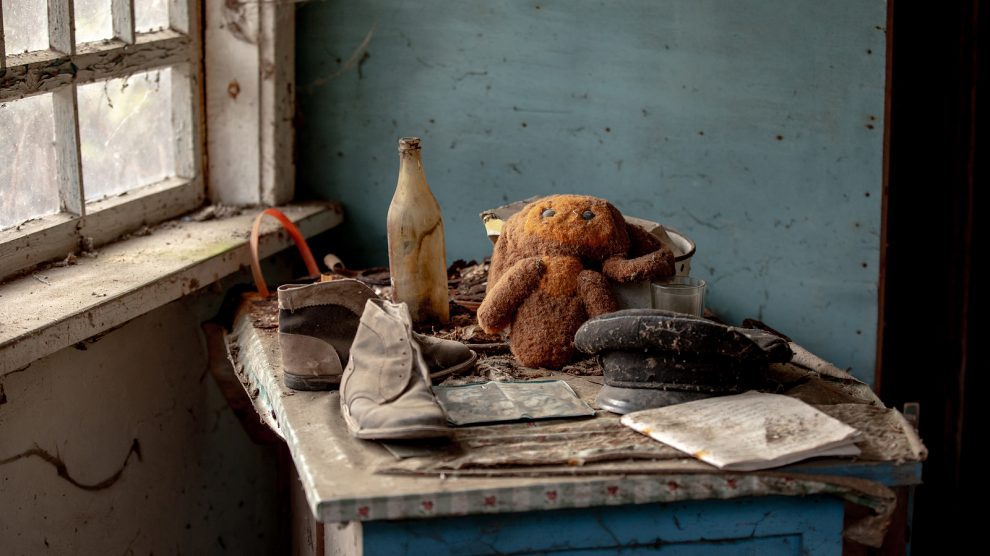 Chernobyl: The Lost Tapes, shows that in the Soviet Union, life was cheap. Russia’s invasion of Ukraine proves that for the Moscow leadership, it still is.

Frequent white flashes on video footage of the town of Pripyat, taken on the day after the explosion at the Chernobyl nuclear power plant on April 26, 1986, at first appear to be nothing more than the effects of dated footage: the film in question is, after all, almost 36 years old.

Then, Chernobyl: The Lost Tapes, makes its first (of many) startling revelations: the flashes are in fact the result of high levels of radiation in the atmosphere.

What’s remarkable is that when the revelation is made, we are watching children playing, families taking a morning stroll. It all looks so normal, as if the most catastrophic nuclear disaster in history had not occurred just a few kilometres away only hours earlier.

Pripyat, purpose built in the early 1970s to house workers from Chernobyl, was clearly as good a place to live as anywhere in the Soviet Union. The accounts of former residents suggest a privileged lifestyle. “We were lucky,” says one.

Lucky until the accident, that is. Then all hell was unleashed on the town and the surrounding area, which continues to be inhabitable. Scientists estimate that it will be at least 20,000 years before the area around the now-encased Chernobyl reactor is once again safe for human existence.

It’s therefore all the more remarkable that so many of Pripyat’s inhabitants carried on with daily lives in the days after the explosion at the nuclear power plant, until the authorities finally decided to evacuate the town. Told to take only basic necessities and important documents, people were assured that they would return in days.

There were no clues that their departure would be permanent.

Indeed, in the immediate aftermath of the explosion, few people really knew exactly what had happened, even those working at the nuclear power plant. The Soviet government had little appetite to find out, for fear of damaging its international reputation.

At first, the Soviet Union was desperate to keep quiet about the fact that there had even been an accident. It was only forced to acknowledge that there was a problem on the evening of April 28, after a sharp increase in radiation levels set off alarms at the Forsmark nuclear power plant in Sweden, over 1,000 kilometres from Chernobyl.

Even then, the Soviet public were offered only a 20 second brief on the 9pm news: There has been an accident at the Chernobyl nuclear power plant. One of the nuclear reactors was damaged. The effects of the accident are being remedied. Assistance has been provided for any affected people. An investigative commission has been set up.

Chernobyl: The Lost Tapes, directed and produced by James Jones, is a remarkable documentary, making use of footage – white flashes and all – which almost certainly never should have been filmed. The camera operators almost certainly didn’t know that they were risking their lives in shooting it, just as the crews who battled to shut down the fire at the plant were largely oblivious to their fate.

Within days, many had fallen ill, many terribly so. Graphic shots of the effects on the human body of exposure to high levels of radiation, many of which are too horrific to watch, precede the inevitable news that all but a few died.

One woman, married to a firefighter, hugs her husband as he dies in hospital. Pregnant, she survives, but her baby dies within hours of birth.

“The baby saved me,” she says. “She absorbed all the radiation.”

By the time that so-called “liquidators” were brought in to clear highly radioactive debris from the roof of the power plant (after robots, specially brought in from West Germany, failed as a result of the radiation frying their electrical systems), it was difficult to keep the dangers a secret.

Poorly equipped, poorly prepared, some are seen joking, reassuring each other of the rewards that await them (both cash bonuses and lavish amounts of vodka). But behind the smiles is fear. One, lucky enough to survive, says that “we were just liquidators, cannon fodder”.

The Soviet Union didn’t care. Even months later the authorities were still claiming that illnesses clearly caused by radiation were in fact psychosomatic, the result of what it called “radiophobia”.

Locals knew better. Livestock born with missing limbs were evidence enough that this was not “all in the mind”.

Even today, 36 years on, there is still no official, accurate death toll from the Chernobyl disaster. Sometimes given as 31, at other times 54, it could well be in the hundreds of thousands.

Chernobyl: The Lost Tapes was completed just weeks before Russia invaded Ukraine on February 24 (Russian troops even briefly occupied the Chernobyl site before it was liberated a few days later by Ukrainian forces).

As such, what would have been an important documentary has now become essential.

For the invasion, in which so many poorly equipped and poorly prepared Russian conscripts have taken part (cannon fodder, if you like), as well as Russia’s numerous war crimes, are a reminder that modern Russia has the same disregard for human life that Chernobyl: The Lost Tapes leaves us in no doubt was state policy in the Soviet Union.

Chernobyl: The Lost Tapes is currently available in the UK on Sky and Now TV.