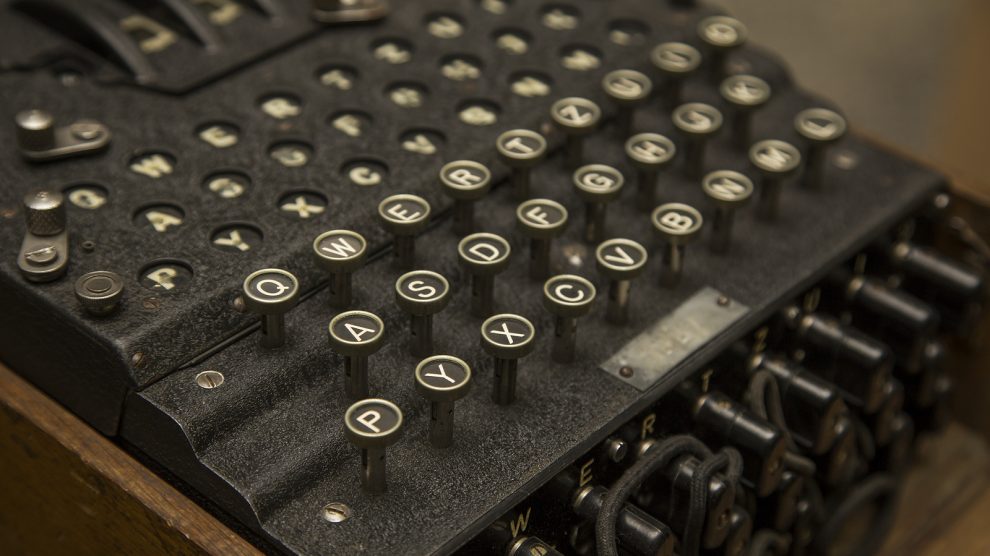 Enigma. Decipher Victory, reveals the extent to which the input of Polish cryptographers made possible the breaking of Nazi Germany’s Enigma code during World War Two.

Organised by Poland’s Wielkopolska region and financed by the Polish Ministry of Foreign Affairs, a major exhibition, Enigma. Decipher Victory, has previously been on display in museums and galleries in Belgium, France, the Netherlands, Italy, Portugal, as well as the UK’s National Codes Centre at Bletchley Park.

It is now available online.

While Britain’s Alan Turing has in large part been credited for cracking the Enigma code, employed extensively by Nazi Germany during World War II, in all branches of the military, his success would have been impossible without the contribution of a number of Polish thinkers.

The exhibition tells the story of these Polish mathematicians and cryptologists, which it describes as “forgotten”, but imperative to decoding Enigma, an achievement many historians believe greatly contributed to allied efforts against Nazi Germany and shortening the war.

Most of Poland’s groundbreaking achievements in code-breaking during the World War II were made possible by the work of mathematicians working at the Polish Cipher Bureau.

An establishment similar to Britain’s Bletchley Park, which became the centre of the Allies’ code-breaking efforts during the same war, the Polish Cipher Bureau (Biuro Szyfrów) was established as a cryptography and cryptanalysis institution almost two decades earlier.

Pressured by a threatening and expanding Soviet Union, the bureau was created in 1919, at the height of the Polish-Soviet War, during which an estimated one hundred Russian ciphers were broken successfully.

One of those figures whose legacy has been highlighted by the exhibition is Marian Rejewski. He studied mathematics at Poznań University, and in 1932 reconstructed the Enigma machine – already in use in Germany – using limited information provided by French military intelligence.

In particular, Rejewski was the first to note the cyclical nature of the cipher machine. Knowing this feature, he used mathematics to reconstruct it without ever having to see it, and eventually the first to attempt to read a message sent by the Enigma.

As early as 1920, Rejewski was one of 26 students at the Faculty of Mathematics at Poznań University to be selected by Maksymilian Ciężki, the head of the Polish Cipher Bureau at the time, to take part in a cryptology course.

After six months Rejewski was one of the eight mathematicians working at a “specially-organised branch” of the Polish Cipher Bureau.

Also part of the team was Henryk Zygalski, who in 1938 developed the Zygalski sheets – a cryptologic technique which was later heavily utilised at Bletchley Park to finalise efforts to decode the Enigma.

According to exhibition, Turing acquired Zygalski’s work during a trip to France in 1940 when he cooperated with his Polish counterparts

As the allies were making final efforts to break the German code, Rejewski and Zygalski, alongside Jerzy Różycki, also of the Polish Cipher Bureau, joined Turing at Bletchley Park. The three mathematicians are now commemorated at Bletchley’s Polish Memorial.

“They invited the French and British and explained all their codebreaking methods and handed over a Polish mock-up of the Enigma machine which they’d made,” says Bletchley Park Polish expert John Gallehawk.

According to Gallehawk, during the war, it was “a magnanimous gift for one country to reveal its intelligence secrets to another.”

In April 1940, the team made up of British and Polish mathematicians successfully decoded the Enigma, which historians have argued shortened the war by two years.

At the end of the war Henryk Zygalski chose to remain in the UK. And yet while the Zygalski sheets were vital for Turing to successfully decode the Enigma and for the Allies eventual victory, the UK did not recognise his Polish diploma and he had to enrol on a mathematics degree course at a British university.

Unsurprisingly, Zygalski completed his degree with ease and eventually became a lecturer of mathematical statistics at the University of Surrey and remained in the country until passing away in 1978.

Just prior to his death, Zygalski was also awarded an honorary doctorate by the Polish University in Exile in London for his essential contribution to breaking the Enigma.

His colleague Marian Rejewski, whose work at Bletchley Park was equally important, returned to Poland after the end of the war where he began working as an accountant and remained reluctant to speak of his contribution to the British war efforts, so as not to attract any unwanted attention from Poland’s communist government.

Only in 1967 did he submit his accounts of World War II to the Polish Military Historical Institute.

Torlakian, and other lesser-known dialects from Central and Eastern Europe
How a children’s cartoon earnt Johnny Depp a medal in Serbia
Comment