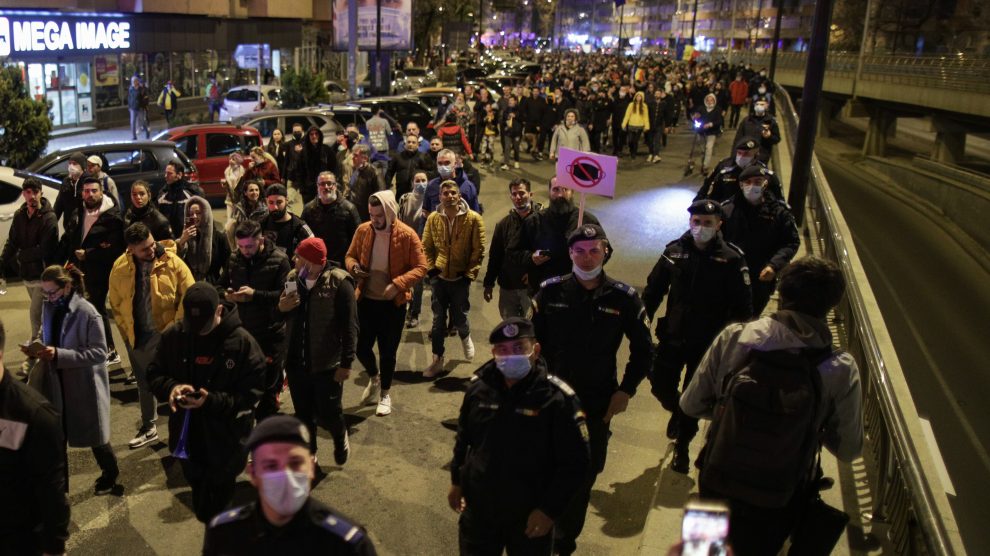 There is no Covid-19 lockdown in Romania. The terraces of cafes and restaurants are full, shops are open, parks teem with parents and children, and the country’s ski resorts are enjoying a bumper year. And yet as alarming numbers of people become infected with coronavirus and die, others are protesting – some violently – against what very loose restrictions there are.

As predictable as night following day, a protest against Covid-19 restrictions in the Romanian capital Bucharest turned violent in the early hours of March 30, when police were attacked by demonstrators defying a curfew imposed to prevent the further spread of coronavirus infections.

At least 12 policemen were injured in the clashes in Bucharest, and almost 200 demonstrators – many thought to be football hooligans – arrested.

In the northeastern town of Bacău, protesters went so far as to occupy the forecourt of a hospital, calling doctors and nurses caring for the sick “assassins”.

In the western city of Timișoara, one of the worst affected by a recent surge in Covid-19 cases, demonstrators picketed the home of the mayor, Dominic Fritz, a German, shouting xenophobic slogans and demanding he resign and leave Romania.

Romania has seen an alarming surge in new infections in recent weeks, particularly in Timișoara and the capital, and yet the country’s government – spooked by anti-restriction sentiment stirred up by a right-wing political party, the Alliance for Romanian Unity (AUR) – has so far been reluctant to take the kind of decisive action necessary to halt the rise in cases and ease the burden on Romania’s creaking health system.

What makes Romania’s “anti-restriction” protests baffling is the simple fact that Romania’s restrictions are not particularly restrictive.

What appears to have set off the current protests is the modest (if admittedly arbitrary and poorly explained) requirement for shops in towns and cities which have a high rate of infection (most of them) to close at 6pm from Friday to Sunday, while a curfew is in place on those days from 8pm to 5am (from Monday to Thursday, shops can remain open until 8pm, and curfew does not begin until 10pm).

That, and the ongoing requirement to wear protective face masks in public spaces.

Nevertheless, restaurants, bars and cafes can operate outdoor seating areas with no limit on capacity (and with no requirement for customers to wear masks). This past weekend – the first truly spring-like weekend of the year – they were packed, with locals enjoying an al fresco lunch in the warm sunshine.

Romania’s ski resorts have been open throughout the winter, enjoying a bumper season with resorts closed elsewhere in Europe, and there are no restrictions on travel within or outside of the country. Although self-isolation is meant to be obligatory for travelers returning from some destinations, there is no expensive, compulsory quarantine as in other countries, such as the UK.

A full lockdown it most certainly is not.

The country’s vaccination roll-out has been decent if far from exemplary. So far, 10 per cent of the population has received at least one dose of a vaccine, just below the European Union average of 10.8 per cent.

On March 15, vaccines were opened up to the general population, and around one million people are on waiting lists. At the current rate of vaccination the vast majority of these people would have received at least one dose by the end of May.

This begs the question: who will Romania vaccinate then?

Not many of those demonstrating on the streets of its towns and cities, which underlines the futility of their protest. The only way out of the Covid-19 nightmare – restrictions and all – is mass vaccination, and yet many these people appear to be not only anti-restrictions, but also anti-vaccination.

Such a lack of logic and understanding is bewildering, and suggests that the protests are motivated purely by politics.

The visible presence of a radical trade unionist, Ion Rădoi, at the protests in Bucharest is further evidence of that.

Rădoi leads the Bucharest metro workers’ union, which on March 26 brought the Romanian capital to a standstill with a wildcat strike against plans by the country’s reformist transport minister to end the union’s monopoly on advertising and commercial space on the metro.

For reasons that are inexplicable, for decades the proceeds from advertising billboards and commercial space on the metro system have not gone to Metrorex, the heavily-subsidised company that operates the metro, but to the union.

An unholy coalition of trouble makers

Although it claims not to be behind the organisation of the protests, AUR’s leader George Simion was a prominent presence at the demonstrations.

Before entering politics Simion was previously a leading figure in one of the many ultras groups that follows the Romanian national football team, and regularly clashed with police at matches.

The vehemently nationalist party, founded just over a year ago, was the real surprise of last December’s parliamentary election, taking almost 10 per cent of the vote on a platform that preached Covid sceptisism alongside traditionally nationalist tropes such as the unification of Romania and Moldova (an utter nonsense: Romania cannot afford Moldova, while – perhaps more importantly – the vast majority of Moldovans do not want unification).

Nevertheless, AUR last week announced plans to begin operations in Moldova, albeit without Simion, who is banned from entering the country.

With Moldova seemingly heading for a snap election at some stage over the next few months it will be eyeing seats in Moldova’s parliament too.

Making a great deal of fuss over some very modest restrictions can only boost its profile further and may attract some of Moldova’s Covid sceptics to its ranks.

AUR wears its nationalism as a badge of honour, a symbol of patriotism.

In the meantime, expect Romania’s “anti-restriction” protests to continue, and, alas, until the country’s government finds the courage to impose the kind of real lockdown measures that are so desperately needed (and explain, coherently, why they are doing so), the number of infections and deaths to rise.