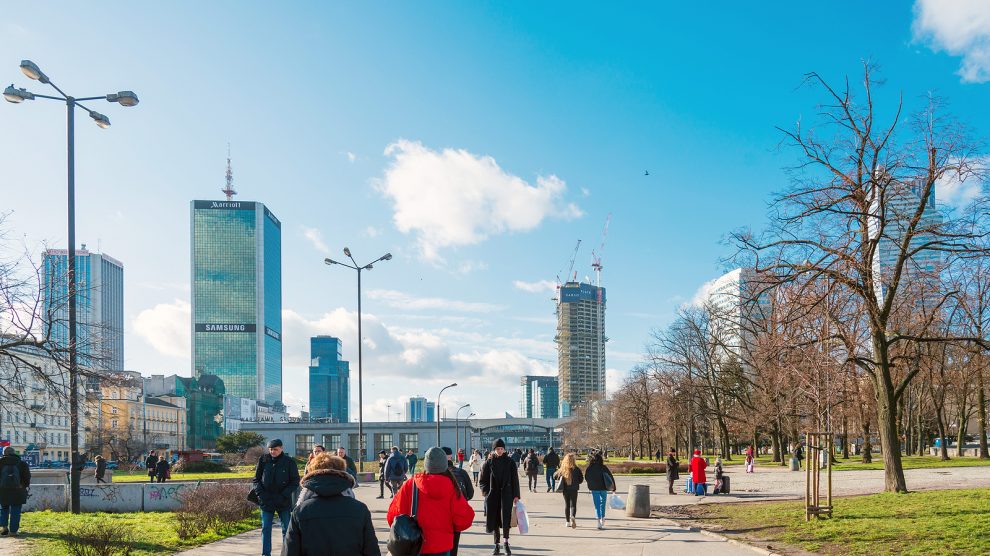 Emerging Europe journalist Jo Harper’s new book Our Man in Warsaw: How the West Misread Poland is, he writes, as much about Britain as it is Poland.

My book, Our Man in Warsaw: How the West Misread Poland, was written under lockdown during 2020, with three small kids at home.

It was written in some frustration and at times incredulity. The ludicrousness of the official rhetoric, and the clumsiness of the officials that delivered it was only matched by the blunt and often self-defeating mantras of the opposition and their mates in the foreign press.

The British press seemed at times to simply parrot the opposition’s points of view and follow its strategy of fighting the ruling Law and Justice (PiS) government on a “culture war” terrain. Ostensibly about Poland, the book is actually also a look at my own country, Britain, undergoing its own illiberal revolution during 2019-20.

Admonishing plucky little Poland for its naughty anti-democratic ways worked quite well as long as Westminster remained a functioning model of how politics might be done. But as Brexit ripped through the institutions and institutional culture of the Westminster Model in 2019, it became harder to use the old benchmarks.

Indeed, some of the key issues that had been brought up in the first four years of PiS’s rule in Poland were also centre stage in UK debates over Brexit: the independence of the judiciary in a democratic system of government, the role and power of the legislature versus an overbearing executive, and media independence.

Then there was a rise in ethno-nationalism, in the UK case perhaps most clearly English nationalism, and euroscepticism. There was also a strong majoritarian theme running through elements of both PiS and Conservative party discourse and political behaviour in particular after the Brexit referendum in June 2016.

The rise of what are often called “Culture Wars” was another area of overlap, with the rise of the Metoo and then the BLM movements coinciding with protests in Poland over tightening abortion legislation, restricting women’s rights and rhetorical attacks on LGBTQ groups.

UK press coverage of Poland and its parliamentary election on October 13, 2019 was therefore to some extent a product of an internal struggle within the UK as much as a simple reflection of events as they actually happened in Poland. PiS’s Poland and the other populists in the EU could either be held up as examples of why a stronger EU needed Britain’s continued input or why it should leave the Europeans to their own devices.

From this perspective, Poland was at once a blank page for many in the UK, a place of projected fantasies, of new starts or mistakes to be corrected.

But these were the Britains and Polands as they would like to see themselves against how they were actually seen by others, the virtual against the real.

This is where the idea for writing my book started. Weren’t we as foreign observers actually writing allegorical tales about our homelands. Weren’t we really just writing the things we couldn’t easily say about Westminster and Washington?

Writing about Poland’s overly deferential attitude towards the Catholic church was perhaps an allegorical look at how Brits idolise their Royal Family, idealise the past, the importance of social hierarchy, tradition and notions of purity and good breeding.

Both countries, meanwhile, harboured their own colonial hankerings of sorts, Poland’s in its notional Commonwealth, with as a political and a mental space, stretching “From Sea to Sea” (Baltic to Black) and the UK in its imperial prowess on the High Seas.

Neither had yet to fully come to terms with its actual size and status. Then there was writing about Poland’s anti-Semitism. Perhaps this was easier than writing about England’s anti- black and anti-Irish (if not also its own anti-Semitic) history. The two countries also seemed to share a legacy of class cleavage drenched in ancient – and ethnicised – difference: in Poland the Sarmatian myth and in Britain the Norman one, both invading noble, warrior castes imposing their will, language and religion on a peasantry defined as “Other” and lesser.

When I started writing in early 2016 about Poland’s descent into illiberalism, we were still in a pre-Brexit and pre-Trump era. In early 2016 a paradigmatic shift in what was acceptable in UK and US public discourse was not widely expected. During the course of writing my first book on the subject, Trump and Brexit seemed to creep up behind Washington and Westminster, respectively, and by 2017 a new set of rules had apparently claimed large chunks of the public discursive space.

We saw a slipping of the veneer, revealing a picture of Britain that few outside had seen so obviously as two sides of the same coin, the beautiful and the beast, the gent and the hooligan, the sublime and the ridiculous. This was a process of national self-revelation. Britain as a “normal” mid-sized European country, grappling with the weight of an imaginary identity and the reality of a world where it wasn’t at the high table.

From spatial incarceration to self-colonisation

In the Cold War period, from a Western perspective, the Iron Curtain set a geographical division into “us” and “them.”  The two systems’ border was inscribed in the mental map, places inhabited by two tribes. The Other was, to use Arjun Appadurai’s term, “spatially incarcerated”. But, as Maria Todorova’s study of the symbolic geography of Eastern Europe shows, during the 1980s a new concept of Central Europe appeared, which saw the region as an independent cultural entity, differentiating itself from Soviet Russia and the rest of the Eastern Bloc. The “new order” that emerged in the 1990s allowed Orientalism to escape the confines of space and time, with the border now mostly within societies.

Ewa Thompson describes Poles’ attitudes towards western countries as a mix of desire and resentment, with Poles adopting the discourse of the conquerors, blaming themselves for the failure of the Polish state, at the same time as the belief in Western supremacy grew stronger. This would posit Poland as a country colonising its own citizens, who are defined by the elites not in terms of their nationality or race but in terms of class differences. In scholarly discourse this is an “internal colonisation approach” based on the assumption that cultural elites colonise other social strata.

As with British peers of the realm, only szlachta members, irrespective of their ethnicity or culture of origin, were considered as “Poles.” This internal Orientalisation justifies a para-colonial relationship with western societies, casting them as more modern and representing a future which Poles aspire to. Some societies are “behind” western ones, existing in their past rather than in a global present.

Fast forward a bit. July 12, 2020, the day of voting in the second round of Poland’s presidential election and a wonderfully odd piece which appeared in The Observer by Nick Cohen about the journalist Anne Applebaum.

It seemed to help fill in some of the gaps:

“Millennium Eve, a housewarming for a manor house in western Poland they [Anne Applebaum and her husband Radek Sikorski, a former Polish foreign minister] had helped rebuild from ruins. They were young and happy. History’s winners. (…) The dilettante style of English conservatism charmed her. She came to know the conservative philosopher Roger Scruton and Margaret Thatcher’s speech- writer John O’Sullivan.

“They had helped east European dissidents struggling against Soviet power in the 1980s and appeared to believe in democracy (…) How could she foresee that Scruton and O’Sullivan would one day accept honours from Viktor Orbán. (…) What was life in the English right like then. ‘It was fun,’ she said. Her husband knew Boris Johnson. They were both members of the Bullingdon Club at Oxford. She assumed that he was as much a liberal internationalist as Sikorski was. (…) When the couple met Johnson for dinner in 2014, she noted his laziness and ‘all-consuming narcissism’, as well as the undoubted charisma that was to seduce and then ruin his country. (…) They were amusing, we are told, and ‘we were young, History’s winners’.”

My book had been bumbling along slowly until this article appeared, after which it seemed to write itself. I was after all still young and one of history’s winners.