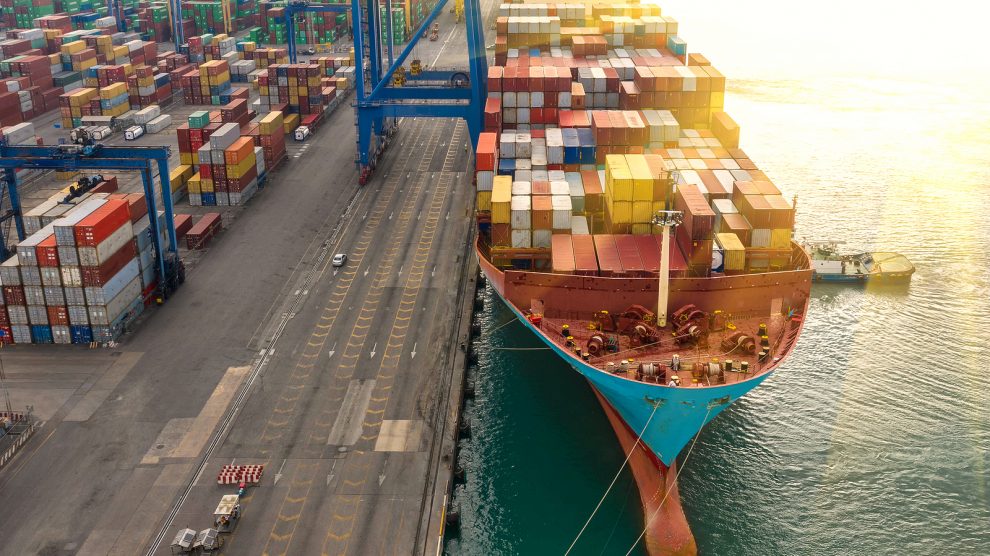 A planned “mega port” at Świnoujście, in Poland, is threatening to cause a row between Poland and Germany.

The planned construction of a deepwater container terminal at Świnoujście, in Poland, just five kilometres from the German border, has come in for fierce criticism from the German Green party, which is likely to be part of the country’s ruling coalition following federal elections in September.

The port’s developer, Szczecin and Świnoujście Seaports Authority (SSSA), says that the new terminal will have a capacity of two million TEUs (twenty foot equivalent units) per year, and has already put out a tender to find an operator.

Świnoujście’s proximity to Germany, as well as its location at the head of the shortest route from Scandinavia to Central and Eastern Europe, have long been touted by the Polish government as offering benefits for the entire emerging Europe region.

However, the environmental implications of the deepwater port are threatening to cause a rift between Germany and Poland.

Świnoujście is already the site of a liquefied natural gas (LNG) terminal, opened in 2016 and currently being expanded.

Current plans see the port stretching hundreds of metres into the Baltic Sea, including a pier that will be 1,400 meters long and 505 meters wide. A quay will allow for the simultaneous operation of two large 400-metre vessels and a smaller container ship measuring up to 200 metres. This means that the port will be able to service the largest vessels currently in use in the Baltic Sea area.

But, as with any project of this scale, environmental concerns have popped up, notably water pollution and deforestation.

Transhipment facilities, warehouses and transport routes also form part of the project, on the land side. These will total around 400 hectares and part of an old growth, primordial coastal forest, a protected area under NATURA 2000, will be cut down.

The building of the new port is expected to strengthen Poland’s position as a maritime hub and improve its connections with Hungary, Czechia, and Ukraine, via the Oder and Vistula rivers. For the Germans, however, a major concern is the proximity of Usedom island to the harbour site.

Most of Świnoujście is located on the island, but the largest part of the island belongs to Germany.

Because of this, the Espoo Convention applies. Under the convention, of which Poland and Germany are both signatories, countries must carry out environmental impact assessments at an early stage of planning and must consult each other on all major projects that are likely to have adverse environmental impact across borders.

So far, no such study has been produced for the Świnoujście mega port. Participation from the German side is also missing.

According to Rainer Sauerwein of Lebensraum Vorpommern, a Usedom citizens’ initiative, and Waldemar Okon of the local Green party, this amounts to a violation of the agreement that cross-border activities impacting both sides need to be coordinated.

European Parliament may have a say

“Due to the massive environmental damage that is expected to result from the port’s construction, the changes in water flows along with the increase in heavy traffic on both sides of the border, the Polish side is obliged to comply with the Espoo Directive and find common solutions,” says Mr Sauerwein

Because of these issues the Green party now intends to bring the matter to the European Parliament.

“The size of the project, the proximity to neighbouring communities, the expected traffic of container vessels, and the potential impact on tourism and the environment along the German coastline, requires that Germany, and especially the people living in Usedom, should be involved in the planning,” says Hannah Neumann, an MEP for the German Green party.

“We have amiable cross-border relations in the area, and the German and Polish economies are highly dependent on each other. That’s why I urge the Polish and German sides to enter into an intensive exchange of views on this project.”

Last week ago, Poland found itself in hot water over a similar issue regarding the Turów lignite mine near the Czech border. Czechia is now suing Poland in the European Court of Justice.

Poland has also in recent years come in for criticism for its ongoing widening of a canal through Vistula Spit in the east of the country, despite growing concerns from local residents, naturalists and the European Union that it could negatively impact the environment.

The widening of the Vistula Spit would allow ships to come and go to the Polish maritime area without having to request permission from Russia to use the only other entry point into the Vistula lagoon, which is located on Russian territory.