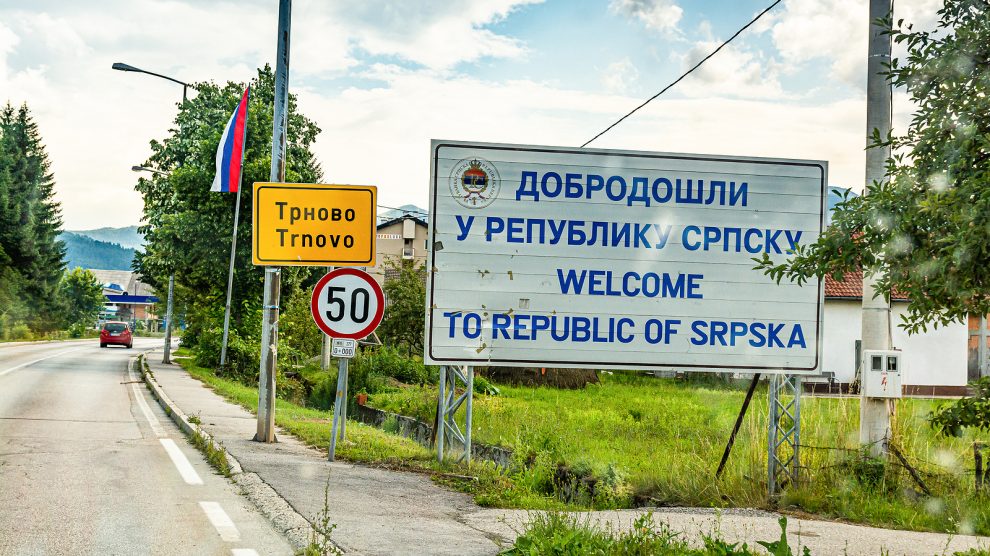 Apocalyptic headlines have this week warned of the imminent descent of Bosnia and Herzegovina into a new war. That outcome remains unlikely, but there’s little else to be positive about.

The European Union’s token military presence in Bosnia and Herzegovina can stay, at least for another year.

On November 3 the United Nations Security Council unanimously renewed the mandate of the EU’s 600-strong peacekeeping operation, known as EUFOR, but only after removing any mention of the Office of the High Representative (OHR) – which oversees the implementation of the 1995 Dayton Agreement that brought an end to the Bosnian War – in order to appease Russia and China.

Kurt Bassuener, a co-founder and senior associate of the Democratisation Policy Council, a Berlin-based think tank, has called it “an abject humiliation for the West” and leaves the OHR “politically weakened”.

The OHR sits at the very top of Bosnia and Herzegovina’s political tree. The High Representative’s role was outlined in the Dayton Agreement itself with a mandate is to oversee the civilian implementation of Dayton.

But the High Representative – currently Christian Schmidt, a German – also possesses something called “Bonn Powers” — the power to adopt binding decisions when local parties are unwilling or unable to act, and the power to remove from office public officials who violate legal commitments or the Dayton Agreement itself.

In his first report to the Security Council (he took on the role only in August) Schmidt warned that Bosnia and Herzegovina was facing the greatest threat to its existence since the war of the 1990s.

Schmidt was due to brief the Security Council himself, but was blocked by Russian and China – both allies of Serbia – from doing so.

Moscow, which has long objected to the OHR, refuses to recognise Schmidt and said that his report was an “extremely biased and anti-Serb document aimed at destroying the glimmer of peace and cooperation among people in Bosnia.” Its official position is that the post of High Representative remains “vacant”.

Fearing a Russian and possibly Chinese veto of EUFOR’s mandate, Western diplomats persuaded Schmidt not to brief the Council personally, instead merely distributing its contents to the 15 Council members.

When the resolution to renew EUFOR’s mandate was finally put to a vote, all mention of the OHR was removed from the text.

Schmidt’s report refers to the recent actions of Milorad Dodik, the president of the Republika Srpska, one of two high-autonomous entities that make up Bosnia and Herzegovina (the other is the Bosniak-Croat Federation) as “tantamount to secession without proclaiming it” and that “the prospects for further division and conflict in Bosnia are very real”.

The High Representative claims that Dodik’s threat to withdraw Bosnian Serb troops from the federal Bosnian Army and create a separate force, as well as Serb withdrawals from other state institutions, would “ultimately undermine the state’s ability to function and carry out its constitutional responsibilities”.

“Should the armed force of Bosnia and Herzegovina splinter into two or more armies, the level of international military presence would require reassessment,” Schmidt warns.

The US ambassador to the UN, Linda Thomas-Greenfield, said during the Security Council meeting that pressure from Dodik had placed Bosnia on a “dangerous path” that could break the country apart.

“Bosnia is at a critical juncture in its post-war history”, she said. “The heated rhetoric must stop.”

“We note his view that Bosnia and Herzegovina is facing the greatest existential threat of the post-war period and heed his warning on the real prospects for further division and conflict,” she said.

As good as it gets

The renewal of EUFOR’s mandate is unlikely to dampen Dodik’s rhetoric. Indeed, the concessions made to his allies could well embolden him.

“This is unfortunately new ammunition for Dodik, which he will no doubt use to spread fear and psychosis in Bosnia and Herzegovina,” Erol Avdovic, a journalist who followed the Security Council session in New York, told Deutsche Welle.

Compounding the problem is the total lack of alternatives to the current morass.

Bosnia and Herzegovina currently has no path towards EU membership. The country is recognised only as a “potential candidate”, and its status shows no signs of changing any time soon.

None of its main allies – Bulgaria, Croatia, Cyprus, Greece, Hungary, and Slovenia – who together published a “non-paper” earlier this year calling for Bosnia and Herzegovina to remain “squarely in the EU’s focus”, and that the EU should “spare no effort” in assisting it to become an official membership candidate, are what can be called heavy hitters.

At a summit in Slovenia on October 6 of all 27 EU leaders and their six counterparts from the Western Balkans however, the prospect of new countries joining the EU in the foreseeable was notably absent.

Eric Gordy, a political and cultural sociologist concentrating on Southeast Europe, especially the states of the former Yugoslavia, is blunt in his analysis: “It’s interesting to see how blissfully uninterested in Bosnia and Herzegovina the EU is, and how they are letting Russia and its puleni guide the whole debate,” he wrote on Twitter.

Despite this week’s apocalyptic headlines, a new war in Bosnia, if not entirely out of the question given Dodik’s determination to secede, remains unlikely.

But the likelihood of any positive developments is equally remote. As has been the case for the past 26 years, “Bosnia and Herzegovina is not at war” is likely to be as good at it gets.