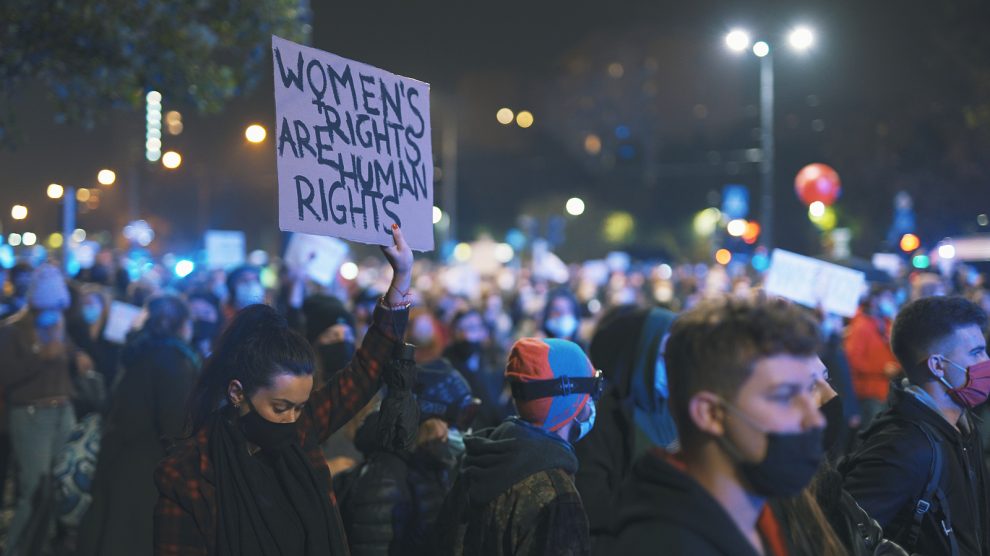 Ten years after of the landmark declaration of the Council of Europe’s Istanbul Convention on women’s rights, a significant number of countries in Central and Eastern Europe have yet to ratify the treaty. Others are considering pulling out.

Council of Europe member states should reinforce efforts to combat violence against women by swiftly ratifying and carrying out a landmark regional convention on women’s rights, according to Human Rights Watch (HRW).

HRW believes that governments should take urgent steps to counter misinformation about the convention and to fight dangerous myths and discriminatory stereotypes that undermine work to curb violence against women.

“The Covid-19 pandemic has exposed violence against women as one of the most far-reaching and persistent rights abuses, and a daily threat to the lives and health of women and girls around the world,” says Hillary Margolis, senior women’s rights researcher at Human Rights Watch.

“At this decisive moment, Council of Europe members should demonstrate they are serious about prioritising the safety and well-being of all women and girls by committing to and carrying out the Istanbul Convention.”

May 11, 2021, is the tenth anniversary of the Council of Europe Convention on Preventing and Combating Violence against Women and Domestic Violence, known as the Istanbul Convention, which opened for signature in Istanbul, Turkey in 2011.

The convention establishes robust, legally binding standards for governments to prevent violence against all women and girls, support survivors, and hold abusers to account. However, in its decade of existence, some governments have withdrawn or threatened to withdraw from the convention and others have refused to ratify it despite soaring reports of domestic violence during Covid-19 pandemic lockdowns.

Thirty-three Council of Europe countries have now ratified the Istanbul Convention, which came into force in 2014, and twelve more have signed but not yet ratified.

Thirty-four countries had ratified, but Turkey’s President Recep Tayyip Erdoğan made an unprecedented decision in March to withdraw from the convention, drawing widespread criticism domestically and internationally. Erdoğan’s decision is a setback for women’s rights in the country and poses dangerous risks for the region, Human Rights Watch said. Turkish authorities frequently fail to protect women from abuse and femicide rates remain persistently high.

The Istanbul Convention is notably inclusive and comprehensive, Human Rights Watch said. It mandates protections from forms of violence that are often not yet incorporated into national legislation, such as stalking, sexual harassment, and forced marriage, and requires protections for all victims of violence, regardless of age, ethnicity, sexual orientation, disability, immigration status, or other characteristics.

A key benefit of the convention is that it requires governments to remedy gaps in domestic law and policy protections for particular groups, including migrants with insecure immigration status, and lesbian, gay, bisexual, and transgender (LGBT) people.

Despite being hailed as a landmark treaty by women’s rights defenders across the region, the convention has faced unprecedented backlash in a number of countries, often due to its definition of gender as a social construct, as well as its explicit inclusion of LGBT people and migrants.

Some governments claim that national legislation provides adequate protection from and accountability for violence against women. However, many survivors continue to face stigma, dismissive attitudes from authorities, and social pressure to remain silent. Weak police and judicial response often compound obstacles to justice and contribute to impunity for abusers. Local women’s rights groups say they provide most services for survivors, including shelter, mental health care, and legal assistance, often with little government support.

“Non-governmental organisations are trying to provide as much help as possible [to survivors of violence], but obviously they do not have enough human or material resources to fill the gap in the institutional system,” says Noa W. Nogradi, a women’s rights activist affiliated with the and Women for Women Together Against Violence Association (NANE) and Society against Patriarchy (Patent) in Hungary.

“We often hear that [the national hotline] does not refer those who want to escape [abuse] to further organisations unless they can prove immediate danger to life. So as long as your husband is simply beating you on a regular basis, but he is not stabbing you right now, this doesn’t help.”

Poland’s Justice Minister Zbigniew Ziobro announced in July 2020 that he would pursue withdrawal from the convention, and Prime Minister Mateusz Morawiecki referred the convention to the country’s allegedly politically-influenced Constitutional Tribunal for review due to its definition of “gender”.

Poland is even reported to be mulling its own alternative to the Istanbul Convention, which would promote the preservation of “traditional family values”.

“Keeping the convention as a document of binding international law in Poland is extremely important for us [because] of the standards that are included there,” said Urszula Nowakowska of the Women’s Rights Centre in Warsaw. “[They] are our reference point, something that we can strive for.”

Hungary’s parliament, where the ruling party Fidesz has a two-thirds majority, blocked the convention’s ratification in May 2020 and Slovakia’s parliament has blocked ratification several times, most recently in February 2020.

Bulgaria’s Constitutional Court ruled in 2018 that the convention’s use of “gender” makes it unconstitutional.

Countries such as Croatia have ratified the convention despite significant opposition from right-wing groups. Still others have committed to ratification but are lagging, such as Ukraine, which signed the convention in 2011.

Azerbaijan and Russia are the only two Council of Europe member states that have not signed the convention.

A better chance at a safe life

Women’s rights defenders say the Istanbul Convention is crucial to ensure comprehensive and much-needed legal and policy reforms as well as resources for their implementation.

Efforts to comply with the convention have spurred positive steps, such as new or strengthened legislation. Several countries have established help lines and bolstered services for survivors. Others have criminalised additional forms of violence such as stalking, forced marriage, and female genital mutilation, or amended legislation to base definitions of sexual violence on lack of wilful consent.

“The convention was a huge source of emotional strength for women,” said Eren Keskin, co-chair of the Human Rights Association in Turkey. “Withdrawing from this convention is to say, ‘I will do whatever I want to you.’”

Keskin said that people should not abandon hope that Turkey and other countries will commit to the Istanbul Convention and its standards: “I believe that the women’s movement will bring this back and [Turkey’s] signature will be on that convention again…. The only solution is to be vocal: everyone has to raise their voice against violence against women wherever they are.”

The wider implications of Joe Biden’s recognition of the Armenian genocide
The British taekwondo star who switched allegiances to Moldova: Elsewhere in emerging Europe
Comment