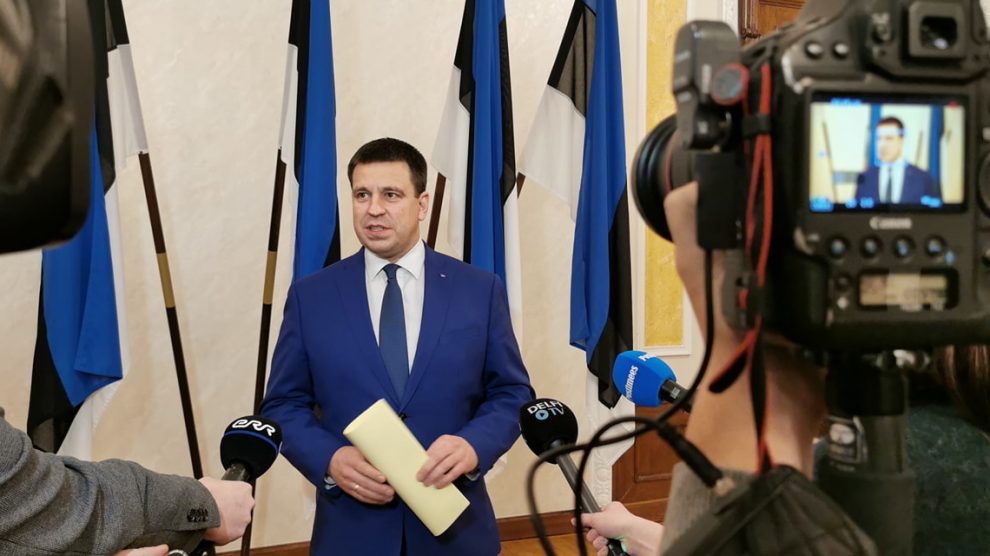 A corruption scandal involving his Centre party has forced the Estonian prime minister, Jüri Ratas, to resign. The biggest losers, however, could be the far-right EKRE party, which looks set to be frozen out of any new government.

Estonia’s prime minister, Jüri Ratas, handed in his resignation to the Baltic country’s president early on January 13 after a corruption scandal forced a raft of key officials in his Centre party to quit overnight.

“In politics, very difficult choices need to be made to solve difficult situations. Today I made a value-based decision to resign as prime minister,” wrote Mr Ratas on his official Facebook page.

“The suspicions presented by the Public Prosecutor’s Office do not automatically mean that anyone is guilty, but they will inevitably cast a shadow on all parties involved.

“In such a situation, it seems only right that, by resigning, I will give the opportunity to shed light on all the facts and come to clarity. I personally have done nothing wrong.”

On 12 January, the Public Prosecutor’s Office announced that five members of the Centre party, including its secretary-general, Mihhail Korb, were suspects in a corruption case.

Korb had allegedly asked an Estonian businessman, Hillar Teder, to finance the Centre party with up to a million euros within a year – in return for a 39 million euros loan for Teder’s Porto Franco real estate development in the capital Tallinn. The loan was granted by Estonia’s state credit agency, KredEx.

In addition to Korb, one of the five people suspected of corruption is Kersti Kracht, an adviser to Martin Helme, Estonia’s finance minister and the leader of EKRE. According to the Public Prosecutor’s Office, Kracht promised Teder that she would use her influence to ensure that the KredEx loan would be granted on favourable terms.

Mr Helme has said that neither he nor EKRE had any prior knowledge of any influence peddling.

Mr Ratas had served as Estonia’s prime minister since 2016, but lost a parliamentary election in 2019 to the Reform party, led by Kaja Kallas, who looked set to become the country’s first female PM.

However, Mr Ratas was able to block Reform taking office by forming a coalition with Isamaa and, surprisingly, EKRE, which had hitherto been considered too far-right for government.

Since then, EKRE’s leaders, both Martin Helme and his father, Mart Helme, who resigned as interior minister last last year, have been a source of embarrassment to the government and a threat to the country’s reputation as a modern, inclusive, society.

The country’s president, Kersti Kaljulaid, as well as Mr Ratas, were forced to apologise in December 2019 after Mart Helme called the then new prime minister of neighbouring Finland, Sanna Marin, “a sales girl.”

“Now we can see that a sales girl has become prime minister and some other street activist and uneducated person has also become a member of the government,” said Mr Helme, who later said that his words had been misinterpreted and were meant “as a compliment”.

It is unlikely that EKRE will be part of any new coalition.

The president has already asked Ms Kallas to form a new government.

“The Reform party is making efforts to form a new functioning government, but I would not underestimate the willingness of the current coalition parties to continue together at all costs. The government has fallen, but unfortunately the coalition still exists,” said Ms Kallas.

An early election is also a possibility, something that may have happened even without the resignation of Mr Ratas.

In November 2020, the government announced a referendum – set for spring 2021 – on the constitutional definition of marriage. The referendum was set to ask a question about whether marriage should constitutionally be defined as being between “a man and women” – thereby ruling out the possibility of Estonia ever legalising same-sex marriage.

On January 11, Ms Kaljulaid called on parliament to make the referendum binding, meaning that the government would have been forced to resign if it was lost.

With EKRE highly unlikely to form part of new government led by Reform, the referendum itself is now unlikely to take place.

Estonians may still be called to vote in spring, however – but in a parliamentary election.