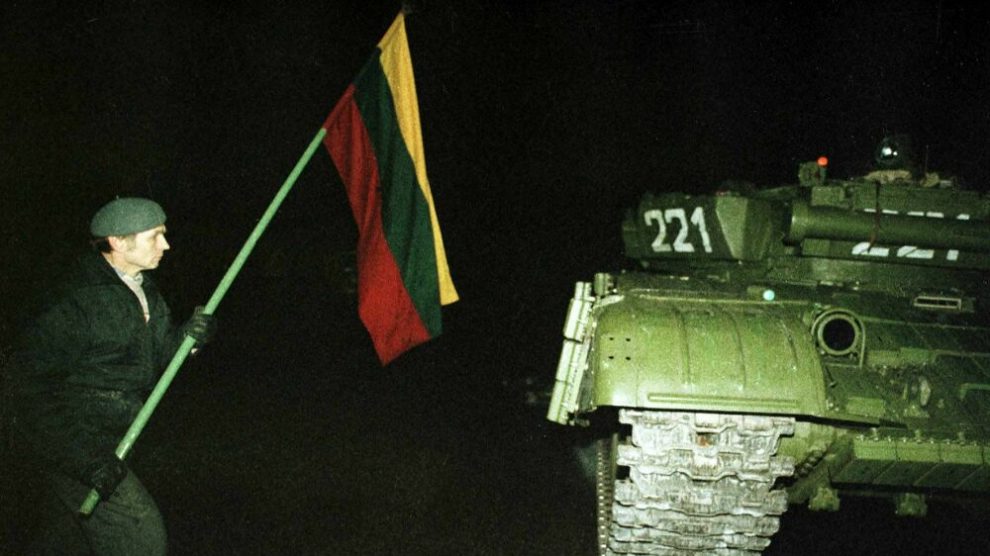 It’s one of the many, largely forgotten stories of recent decades in emerging Europe: the killing, on January 13, 1991 – exactly 30 years ago – of 14 people in the Lithuanian capital Vilnius.

Early in the morning of January 13, 1991, thousands of Lithuanians headed to the iconic TV tower in the capital Vilnius, to make a stand against Soviet troops who had been deployed to crush the Baltic state’s bid to reclaim independence.

Fourteen people were killed, and hundreds more were wounded.

Ten months earlier, on March 11, 1990, Lithuania had declared its independence: the first of the Soviet republics to do so.

Lithuanians had been encouraged by Soviet leader Mikhail Gorbachev’s 1989 repudiation of the so-called Brezhnev Doctrine of 1968, which stated that the Soviet Union was justified in using force to preserve already existing communist governments.

Lithuanians took Gorbachev’s change of position as a signal that a declaration of independence would be accepted by Moscow.

However, the Lithuanians had misread Gorbachev’s intentions. The Soviet leader was willing to allow to the creation of non-communist governments in its satellite states, but the policy did not apply to the republics of the Soviet Union itself.

The Soviet government responded to the Lithuanian declaration of independence with an ultimatum: renounce independence or face severe consequences. On March 17, the Lithuanians gave their answer, rejecting the Soviet demand and asking that “democratic nations” grant them diplomatic recognition.

Throughout 1990, the Soviet government continued to insist that it still controlled Lithuania. Mr Gorbachev put in place economic sanctions against the country, and Soviet troops occupied parts Vilnius. In January 1991, the Soviets launched a wider military operation with elite KGB troops against Lithuania, and their main targets were the TV tower and the studios of the single Lithuanian TV and radio stations.

Lithuanians rushed in huge numbers to the TV tower, determined to stop the Soviet troops from taking control. Tanks rammed into the unarmed demonstrators, who had been using their bodies to try to protect the building, before soldiers fired on the crowd. The television and radio stations went off air.

It was the bloodiest attack on peaceful citizens in the Soviet Union since troops killed 21 protesters in the Georgian capital Tbilisi in 1989.

The next day, Soviet forces descended on the Lithuanian parliament, where thousands more demonstrators had gathered. However, they never received orders to fire on the protesters: Gorbachev, alarmed at the bloodshed at the TV tower, backed down.

Paul Goble, a specialist on ethnic and religious questions in Eurasia, says that as important as it is to remember the events of January 13, 1991, it may be even more important now to remember what happened next.

“Namely, Russian Soviet Federal Socialist Republic (RSFSR) leader Boris Yeltsin immediately flew to Tallinn, met with Estonian and Latvian leaders (the Lithuanians could not make it there), and then issued a joint statement recognising the sovereignty of all three Baltic countries. On his own, Yeltsin called on Russians serving in the Soviet forces not to obey illegal orders to fire on citizens exercising their rights to demonstrate and seek independence,” he wrote in for the Jamestown Foundation, a Washington, D.C.-based institute for research and analysis, founded in 1984 as a platform to support Soviet defectors.

On February 4, 1991, just three weeks after the attacks, Iceland became the first country to recognise Lithuania as an independent state. On September 7, Yeltsin would formally recognise the independence of Lithuania, Estonia, and Latvia, and all three were admitted to the United Nations later that month.

Lithuania has since designated January 13 as Freedom Defenders Day, paying tribute to the unarmed civilians who stood against elite Soviet forces in Vilnius.

In March 2019, Lithuania sentenced 67 Russian, Belarusian and Ukrainian citizens for war crimes and crimes against humanity committed that night. Dmitry Yazov, 94, a former Soviet defence minister, was sentenced to ten years in prison in absentia.

Russia has meanwhile opened a criminal case against the Lithuanian prosecutors and judges who handed down the sentences, and continues to rewrite history. Yazov has claimed that the order to fire on protesters at the TV tower did not come from Moscow, said that Lithuanian nationalists were trying to form what he called “a bourgeois dictatorship”.

Boris Pugo, the Soviet interior minister, even claimed that the Lithuanian protesters had opened fire first, while to this day, Russia still claims that the Soviet troops did not use their weapons at all.

“We characterise these sentences as extremely unfriendly and essentially provocative, demonstrating the bias and political motivation of this disgraceful judgement,” the Russian foreign ministry said in a statement in 2019.

“The attempts by the Lithuanian authorities to rig obvious facts using legal manipulations reflect the deconstructive course of the current Lithuanian leadership with regard to Russia.”

The President of the European Commission Ursula von der Leyen said on January 12 that the European Union owes Lithuania’s freedom fighters, “because today’s Europe would look different without their bravery. The events of January 1991 played a decisive role in overcoming the division of our continent.”

“At the time, resistance against the Soviet Union almost seemed like a hopeless gesture, but what happened that night in Vilnius reverberated across the world,” said von der Leyen. “The event caused shockwaves that in the end shattered the Soviet empire.”

Many historians seeing the January events in Vilnius as a pivotal moment in the disintegration of the Soviet Union. Several months later, a failed coup in Moscow in August 1991 dealt the final blow to the USSR. Pugo, the interior minister, committed suicide after it failed.

“Today, Lithuania is a proud member of the European Union and what a success story this is,” added von der Leyen.

“The sacrifice of the freedom defenders reminds us how precious the fundamental values of our Union are – liberty, democracy, rule of law, freedom of expression, and the right of each country to independently choose its future.”