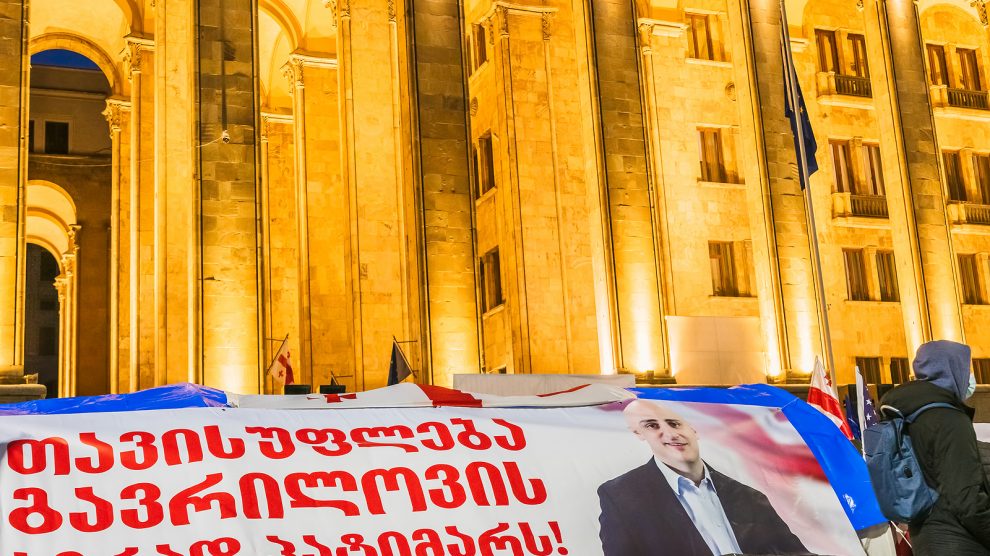 Georgia’s political crisis appears to be reaching a peaceful conclusion, although the country’s largest opposition group has yet to sign up an EU-brokered deal that could end months of uncertainty.

Georgia’s ruling party and sections of the country’s opposition signed an EU-mediated deal on April 19 that takes a significant step towards ending months of political crisis in the country.

The crisis dates back to last October when the ruling Georgian Dream party won a parliamentary election that the opposition claimed was not free or fair, despite the Organisation for Security and Co-operation in Europe (OSCE) saying that the election had been “competitive” and that fundamental freedoms had “generally” been respected.

Since then, opposition parties have refused to take their seats in parliament, and have organised several, large protests in the capital Tbilisi, demanding a new election.

The EU-brokered deal means that the opposition will now enter parliament, while Georgian Dream has agreed to hold new parliamentary elections if it fails to receive at least 43 per cent of the votes in this year´s municipal elections.

The agreement could also lead to the release from custody of opposition politician Nika Melia, chairman of the United National Movement (UNM), whose detention in February sparked the most recent protests and led to the resignation of the country’s prime minister, Giorgi Gakharia.

Mr Gakharia, who had been PM since September 2019, resigned over a disagreement with his own team over the treatment of Mr Melia, who faces charges of organising “violent mass protests” during demonstrations against the Georgian government in 2019. Melia faces up to nine years behind bars if convicted.

The UNM, and other opposition parties, claim the charges are politically motivated. Mr Gakharia appeared to agree, resigning after a Tbilisi court ordered that Mr Melia be taken into custody for allegedly failing to post bail. Mr Gakharia said that Melia’s arrest was unacceptable if it threatened to fuel political divisions in the country. He was replaced by Irakli Garibishvili, who previously served as Georgia’s prime minister from 2013-15, and signed the country’s Association and Deep and Comprehensive Agreements with the EU. He has also had stints as the country’s defence and interior minister.

UNM yet to get on board

Former PM Gakharia has since set up his own – as yet unnamed – party, to which at least six Georgian Dream MPs have reportedly so far defected.

The UNM has been quick to label the new party a facade, however, with one of its MPs, Tina Bokuchova, pointing out that Georgian Dream’s founder and Georgia’s richest person, Bidzina Ivanishvili, has “long threatened to set up his own ‘opposition’ party”.

“Gakharia’s party is, in reality, an Ivanishvili project,” she says.

Notably, the UNM, which is the largest opposition force in Georgia, has so far not signed the EU-brokered deal, demanding the release of Mr Melia before it does so.

European Council President Charles Michel, who oversaw negotiations between Georgian Dream and the opposition, was cautiously optimistic, saying after the deal was agreed that, “This is not the finish line, but merely the starting point – the starting point for your work in consolidating Georgia’s democracy and your work in taking Georgia forward in its Euro-Atlantic future.”

Mr Michel is expected to continue his attempts to get the UNM to sign up to the deal this week.