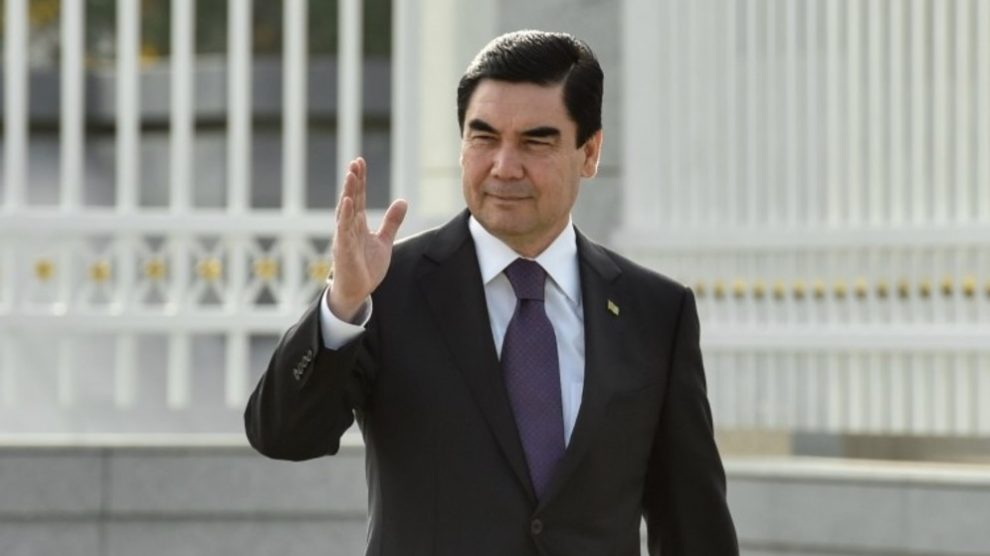 Turkmenistan’s president, Gurbanguly Berdymukhammedov, has become a figure of fun across the world thanks to his idiosyncratic, often surreal public appearances, all of which mask the more sinister, brutal side of his rule.

By and large, little is known about Turkmenistan. Despite being larger in size than Germany, the former Soviet republic has the smallest population in Central Asia. Furthermore, it is one of the least visited countries in the world, with costly, time-consuming visa processes deterring most travelers. Consequently, according to estimates by the UN World Tourism Organisation, Turkmenistan has averaged fewer than 10,000 visitors per year for the past two decades.

That said, the country’s eccentric, autocratic leader Gurbanguly Berdymukhammedov regularly makes headlines. Even if few people outside Turkmenistan can recall his name, Berdymukhammedov – who has ruled the country since 2006 – has become a figure of fun around the world for his unconventional behaviour, bizarre PR stunts and outrageous cult of personality.

In many ways, Berdymukhammedov is continuing the legacy of his predecessor, Saparmurat Niyazov.

Niyazov, the first leader of independent Turkmenistan – which declared independence from the Soviet Union in 1991 – is perhaps best known for giving himself the title of Turkmenbashi, “head of the Turkmen people”.

Under his idiosyncratic leadership, such things as circuses, beards, gold teeth, lip-syncing, make-up and video games were banned. The months of the year were renamed: April was named after the president’s mother.

Niyazov also initiated one of the most intense anti-smoking campaigns in the world (with some claiming it was to help the president himself quit smoking).

Some of Niyazov’s decrees were sacrilegious: he wrote a book called the Ruhnama, which outlined his personal “philosophy” and forced mosques to display the book as prominently as the Quran.

Following Niyazov’s death at the age of 65 in 2006, Berdymukhammedov, a former dentist and minister of health, was voted the country’s new leader in a presidential election that featured no meaningful opposition candidates. While some of Niyazov’s crazier policies were quickly reversed (the months of the year reverted to their original names, and the circus returned), Berdymukhammedov’s 15 years in office have broadly been just as bizarre.

He DJs live sets on television. He has performed allegedly self-written rap songs alongside his grandson. He gifted a puppy to Russian President Vladimir Putin. Jennifer Lopez sang at Berdymukhammedov’s 56th birthday party in the Turkmen capital Ashgabat. She was later forced to apologise.

Berdymukhammedov is also regularly photographed and filmed riding horses, although when he fell from a horse during a race in which he was competing, the video was censored in Turkmenistan. The episode is described in detail in Norwegian travel writer Erika Fatland’s book Sovietistan. Fatland, who was present, had her phone and camera checked for footage of the incident when she left the country a couple of days later. Somebody managed to get it out, however.

In one promotional film, Berdymukhammedov visits an army base. The video opens by showing his gold Mercedes truck rampaging through a dirt road at high speed. A mechanical ladder positions itself by the truck’s golden door, which slowly slides open to reveal Berdymukhammedov, looking like a villain in a Steven Seagal movie.

Towards the end of the video, Berdymukhammedov is shown expertly controlling a bicycle with one hand and shooting a pistol with the other.

Life in Turkmenistan is no joke

Beneath the eccentricity and outlandishness, Berdymukhammedov is a typical authoritarian strongman. Dissent is not tolerated, and according to Human Rights Watch (HRW), there is a total absence of media freedom: the state controls all print and electronic media. Foreign media outlets have almost no access to the country, and the government retaliates against local stringers for foreign publications.

Although Turkmenistan has institutions that could, in theory, provide checks and balances to presidential power, in reality, they merely pay lip service to such duties. Berdymukhammedov has won three presidential elections in a row, winning over 97 per cent of the vote against token opposition.

In 2016, Berdymukhammedov approved an amendment to the Turkmen constitution which allows him to remain president for life. Civil society activists are regularly harassed, attacked and jailed on spurious charges. There have been frequent reports of forced labour being used in state-owned enterprises.

Hundreds of political opponents have been “disappeared”. According to an international campaign dedicated to ending enforced disappearances in Turkmenistan, Prove They Are Alive, about 121 people remain forcibly disappeared. Many of them are believed to be held in Ovadandepe prison, which, says HRW, is known for torture, long-term incommunicado detentions and inhumane conditions.

A particularly high-profile case involved Begmurad Otuzov, a former security official who had been imprisoned under Niyazov in 2002. His family did not know about his whereabouts until fifteen years later, when his corpse, weighing just 45 kilograms, was returned.

Turkmen students attending universities abroad are tightly monitored. In 2018, Omriuzak Omarkulyev, a Turkmen studying in Turkey, came to the attention of security agents after he set up an informal club for Turkmen students. He was lured back to Turkmenistan with promises of support for his activism before being sentenced to 20 years in jail on unknown charges.

Nothing, however, condemns Berdymukhammedov more than his complete economic mismanagement of the country.

Just like his predecessor, Berdymukhammedov has commissioned multiple, expensive vanity projects. Perhaps the most garish of these was completed in 2015: a 21 metre tall monument consisting of a 24-karat gold leaf statue of Berdymukhammedov on horseback, atop a massive slab of marble. In 2020, in the midst of the Covid-19 pandemic, Berdymukhammedov unveiled a six metre-tall golden statue of a dog.

Furthermore, despite a small population and vast natural gas reserves (estimated at ten per cent of the world’s entire reserves), Turkmenistan’s economy is weak and completely dominated by Berdymukhammedov and his inner circle. Consequently, Turkmenistan doesn’t even figure in the World Bank’s Ease of Doing Business index. The European Bank for Reconstruction and Development (EBRD) has branded the country “the least competitive economy among all EBRD’s countries of operations.”

Since 2015, due to a combination of falling gas prices and poor harvests, Turkmenistan has been suffering the worst economic crisis of its independent history.

With reliable official statistic near impossible to come by, and a large black market, researchers at the Cato Institute estimated that in June 2018, inflation was running at 294 per cent.

This eventually prompted Berdymukhammedov to stop providing citizens with free electricity, gas and water in 2019. Prices of food have been soaring since, and the Turkmen manat’s black market exchange rate is reportedly 11 times higher than the artificial, official rate.

This year, there have been reports of long queues at bakeries and ATM machines, and a sharp increase in begging. The country has ignored the Covid-19 epidemic, repeatedly stating that coronavirus does not exist in the country.

Unlike North Korea – to which it is often compared, and which even China appears to have now disowned – Turkmenistan is not without foreign allies. The country enjoys cordial relations with both Russia and Turkey. As long as Berdymukhammedov retains their support, the end of his regime is difficult to visualise.

Furthermore, like other Central Asian autocrats, Berdymukhammedov portrays himself as a bulwark against Islamist extremism, even though there appears to be little evidence of any such activity in Turkmenistan.

It is therefore perhaps time for the world’s press to realise that Berdymukhammedov’s buffoonish antics and eccentric public persona are not merely to be poked fun at: they would do well to begin covering the more unsavoury aspects of what is a wholly despicable regime.

Photo: Gurbanguly Berdymukhammedov on a visit to Ukraine in 2015. Official website of the Ukrainian presidency, via Wikimedia Commons (CC-BY-4.0).