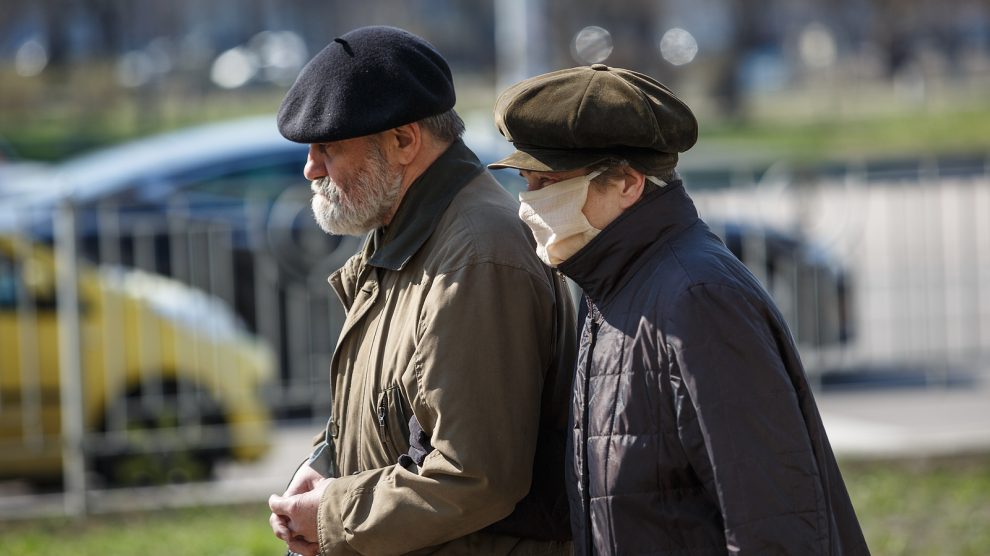 War between Russia and Ukraine no longer looks imminent. We speak to locals in the Ukrainian capital Kyiv – who despite some reports to the contrary – remained stoic throughout the tense military stand-off.

With Russia on April 23 announcing that it would be withdrawing some of the troops that it had deployed to the Ukrainian border over the past month, the imminent threat of invasion appears to have passed, for now.

Not that residents of the Ukrainian capital Kyiv ever appeared to be all that concerned. Despite several sensationalist reports in the international media suggesting that panic had set in, the truth is that hardy Kyivites remained stoic throughout the stand-off.

“Bastards, bastards is what they [the Russian government] are,” says Tamaz, a middle-aged Georgian immigrant who runs a small bakery in the centre of the Ukrainian capital.

Tamaz had lived in Crimea for 15 years, but was deported by Russian authorities two years after the territory was occupied in 2014.

“They did the same to us [Georgia] and now they want to do it here. Pure chauvinism – the Muscovites are like that. I hear people in St Petersburg are at least more anti-Putin. But just wait – Russia will be on its knees before long. Their economy is weak. They’re selling their Far East to China. There are peoples within Russia who despise the sight of the Russian flag. They will not prevail.”

Oleksii, a retiree, was more succinct. “I’ll just say one thing: we [Ukraine] began mobilising in January. Months before the Russians.”

“I feel very negatively about it,” says Polina, an English teacher from southeastern Ukraine. “I completely associate myself now with Ukraine. I used to say ‘Russian’ and ‘Ukrainian’ interchangeably. But now I never want to go back or be reunited with Russia, the way it is now. After the break-up of the Soviet Union, I thought over time, we would end up back together. But it all changed with the Russian aggression, after Russia interfered in our internal affairs and occupied our territory. I believe all people who live here [in Ukraine] now understand the word ‘freedom’ – we feel it and we can feel it is so different and we don’t want to go back to the time when they were telling us what to do, what to think. I advise the Russian leadership to focus on their own economy and people’s welfare and not on wars. And I want them to leave Ukraine alone.”

‘Our government is useless’

Some Ukrainians have blamed their own government for the crisis.

“I know what I feel, I feel the Ukrainian government is useless,” says Anna, a recent graduate. “Whatever Russia’s strategy is, it is smart. They’re doing OK – Ukraine isn’t. It’s upsetting, all of it is upsetting. Crimea is upsetting, eastern Ukraine is upsetting. I think I’m most upset about Ukraine’s weak response – but I’m not sure how much there is we can do. But it’s just politics – why would I be heartbroken and upset about politics?”.

“I feel horribly about it,” says Irina, a retiree from Dnipro, “I’m against war not 100 per cent, but 1,000 per cent. I love Ukraine, I love my city, I don’t want them to be harmed. Until 2014, as a Soviet person, I didn’t see any differences between us, the Russians and the Belarussians. But after 2014, this all changed. I thought, ‘how can this happen, how can Putin do this?’ Our people fought together against fascism, and now he is here supporting fascists. I don’t want to talk badly about Russian people – I have relatives, friends there. But Putin has broken the bond between us. I used to admire him – there were no leaders like that in the Soviet Union, who could joke, give speeches from memory, engage with people. But since 2014 I see what a cruel man he is.”

‘In such a big country, there is no shortage of idiots’

“I don’t think much will come of this,” says Basil, a Kyiv realtor. “I feel Putin needs to keep up his ratings and for that he needs actions. His citizens have this myth – ‘Crimea is ours, Sevastopol is ours’ and so on. That they are saviors, liberators. This started in the Soviet era and Putin has been warming it up again. Now he needs to distract people from internal problems – give them this pride about things they’re doing abroad. About how strong they are, how they’re rescuing Syria from terrorists or Ukraine from fascists. In such a big country, there is no shortage of idiots. And spectacles like this make for great television. Anyways, they’re not the only ones – Americans do the same, even further from their country. We’re just unfortunate that we’re right next to Russia. To be honest, I was surprised that [in 2014] they could only take Crimea and some of Donbas – it shows we have real patriots in this country.”

Should war ever occur, there are some who are confident about Ukraine’s chances.

“It won’t be like 2014. Our army is different now, new. We are closer to western standards and the army isn’t full of spies and [Russian] sympathisers anymore. We have drones now too, from Turkey,” says Andriy, a young man from Kyiv.

With Russian military personnel now returning to their bases, it appears the predictions of some analysts, like Michael Kofman at US think tank CNA Corporation were true – that the latest Russian troop movements were made to be seen, whether as a show of force, or as a deterrent, or as a means of pressuring the Ukrainian government into making concessions.

Now everyone can go back to worrying about Covid-19.

Are Poles Catholics? A new campaign wants to find out
For Turkmen, rapping president Gurbanguly Berdymukhammedov is no joke
Comment