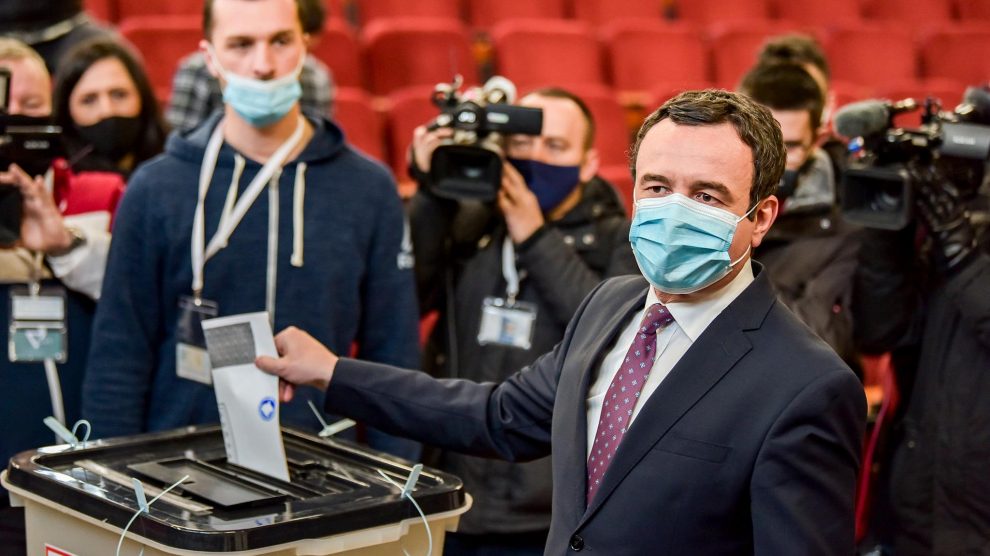 Vetëvendosje, a party which placed the fight against corruption at the core of its campaign, has won a major victory in Kosovo’s parliamentary election.

Albin Kurti (above, right) looks set to once again become Kosovo’s prime minister after his Vetëvendosje party won a clear victory in Kosovo’s parliamentary election on February 14, taking almost 50 per cent of the vote.

The Democratic party of Kosovo (PDK) was projected to receive around 17 per cent of the vote, while the Democratic League of Kosovo  (LDK) trailed in third with a disappointing 13 per cent.

Mr Kurti, who briefly served as prime minister at the head of a Vetëvendosje-LDK coalition in the spring of 2020, said that the election had been unlike any other in Kosovo’s history.

“This was a referendum for justice and against state capture and corruption,” Mr Kurti told supporters after the first partial results pointed towards a clear Vetëvendosje victory.

Kosovo’s acting prime minister, Avdullah Hoti, the leader of the LDK, said that the result had been “different to our expectations”. He accepted the result, however, and said that “I will do to everything to ensure a smooth handover of power”.

The February 14 election was the second time in less than 18 months that Kosovars have been called to the polls.

In the autumn of 2019 Vetëvendosje (the name means ‘self-determination’) just edged out the LDK, leading to months of protracted coalition talks. The two parties eventually agreed to form a government in February 2020, Mr Kurti as prime minister.

His government would be short lived.

Toppled by the US

Following accusations of mishandling the early days of the coronavirus pandemic, Kurti’s government was dismissed via a vote of no confidence two months later, a vote initiated by its erstwhile coalition partner, the LDK.

At the time, Mr Kurti accused a United States envoy of being “directly involved” in toppling his government, calling it part of a plan to achieve a major diplomatic victory in a US election year.

Mr Kurti claimed that claims that the LDK had acted under pressure from Richard Grenell, then US President Donald Trump’s envoy to Kosovo and Serbia.

“My government wasn’t overthrown for anything else except the fact that Ambassador Grenell is in a rush to sign a deal with Serbia which I strongly believe is harmful, since it includes territorial exchange,” said Mr Kurti at the time.

He said Grenell had “hijacked” the Kosovo-Serbia dialogue process and “cares very much about the signature at the bottom of the paper not about the text on the paper.”

“What he needs is a quick deal to show that they can fix crises in the world, perhaps in contrast to Clintons, Bushes and Obama, without any military intervention, and this can be presented as a success in this electoral year,” he added.

Kosovo and Serbia would later agree an underwhelming deal that saw some trade links between the two countries restored, as well as bring a temporary halt to Serbia’s de-recognition campaign. Kosovo meanwhile agreed to recognise Israel and open an embassy in Jerusalem at the behest of the US.

However, the deal did not broach the underlying source of conflict between the two countries: Serbia’s ongoing refusal to recognise Kosovo’s independence.

Relations with Serbia take a back seat

Most analysts believe that tough talk on corruption is behind the surge in Vetëvendosje’s popularity. At campaign rallies, Kurti took a hard-line approach to the country’s endemic corruption (according to Transparency International’s 2020 Corruption Perception Index report, Kosovo is ranked 103rd out of 180 countries globally) criticising what he calls the “old guard” as “oligarchs and cartel leaders”.

“The corruption has been huge, but it is very concentrated at the top, we believe we can beat it,” Kurti said at one of his final campaign events. He also pointed out that the lack of rule of law in the country is scaring potential foreign investors away, negatively impacting the country’s job market.

According to the Kosovo Agency of Statistics data for July 2020, youth unemployment in the country has reached 54.1 per cent.

While Vetëvendosje focused on corruption and the economy, Mr Hoti’s LDK continued to talk up the possibility of a more thorough deal with Serbia.

Mr Hoti made it clear late on February 14 that relations with Serbia – which have dominated Kosovo politics since the country declared independence in 2008, would – for now – have to take a back seat.

“Serbia will be our fifth or sixth priority,” he said.

“[Vetëvendosje] is basically a social movement that became a political force. No one else has been able to do that in the region, and no one has managed to garner quite the youth support Kurti et al have (in a statistically very young society). Those are transformative dynamics,” he tweeted.

“There are aspects of the Vetëvendosje agenda I find troubling; in particular their Albanian unionist streak. But in recent years they’ve adeptly tempered their nationalist platform and run instead on what one could call a categorical anti-corruption/sovereigntist ticket.

“It’s still going to be a dramatic few months in Kosovo – all manner of outstanding constitutional questions loom – but a lot of entrenched oligarchs across the region will shift uncomfortably in their leather thrones tonight. And that’s always a good thing.”

Vetëvendosje’s victory will cement the position of Vjosa Osmani, once of the LDK, as the country’s president. In Kosovo, presidents are chosen by MPs, not by direct popular vote.

Osmani has been acting president since Hashim Thaçi resigned in November of last year after he was indicted on war crimes charges by a court in The Hague. One of the first acts of the new Vetëvendosje-dominated parliament is likely to be a vote that will formalise her position.

Like Kurti, Osmani has highlighted corruption and state capture as the main problems facing Kosovo.

“It is not that we lack institutions to fight corruption, it is political will that is missing. Once high-level politicians are corrupt, it seeps down through the system,” she says.