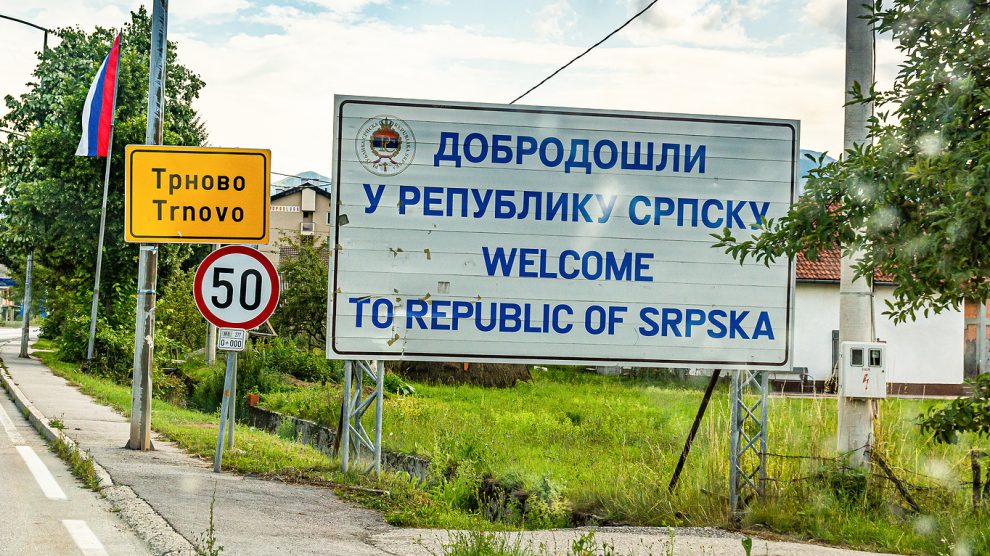 A diplomatic row has broken out between Bosnia and Herzegovina and Slovenia following remarks by Borut Pahor, Slovenia’s president, at a recent meeting with the three members of Bosnia’s tripartite presidency.

First reported by the local Istraga news portal on April 11, Mr Pahor apparently asked the Bosnian presidents if it would be possible for the country to “peacefully separate”.

The following day, the Croat member of the presidency Željko Komšić confirmed that the question had indeed been asked during a meeting in March.

Since then, Mr Dodik has twice expressed his support for the peaceful break-up of the country: first in the parliament of the Republika Srpska, one of the two entities that makes up Bosnia and Herzegovina, and again in an interview for the news agency SRNA.

Adding fuel to the fire, the Bosnian news portal Politicki.ba wrote on April 12, citing sources in Brussels and Ljubljana, that the Slovenian Prime Minister Janez Janša had sent a “non-paper” to European Council President Charles Michel outlining the extensive redrawing of borders in the Western Balkans.

Allegedly, the “non-paper” includes mentions of a land-swap deal between Kosovo and Serbia, Republika Srpska breaking away from Bosnia and Herzegovina and even some parts of Montenegro and North Macedonia being joined with Albania.

Slovenia will take over the six-month rotating presidency of the European Union Council in July.

Both Mr Janša and Mr Pahor have also scrambled to limit the damage, denying that they called for the dissolution of Bosnia.

Mr Janša meanwhile denied sending the “non-paper” in a statement posted on Twitter.

Mr Pahor’s office added that the president wants “the exact opposite” of dissolving Bosnia and Herzegovina, and had only posed the question in the context of concern over such ideas.

“Probably it is best to believe either that he misspoke or was advised not to be saying unwise things,” Dr Eric Gordy from the UCL School of Slavonic and Eastern European Studies tells Emerging Europe.

“It is possible that there is some sort of conspiratorial backstory (Janša and [Hungarian PM Viktor] Orbán revealing their orientations?) or that this is just another one of Janša’s progressively more desperate attention-seeking disruptions, but even if it is, this looks like an incident that is not heading anywhere.”

Dr Gordy adds that there is no context in which the separation of Bosnia and Herzegovina into “ethno-states” is a good or sensible idea.

“To the degree that there is a geographic division of ethnic populations by territory, this is a consequence of large scale violence carried out by fanatics who thought that they could create national states by forcibly changing the population,” he explains.

“The only way that this sort of project can be accomplished is through genocide.”

Reuf Bajrović, the co-chairman of the US-Europe Alliance, and a former minister of energy of the Federation of Bosnia-Herzegovina, tells Emerging Europe that Mr Pahor was simply unwise enough to say what some EU officials have been thinking privately for some time.

“A Putin-friendly group of EU members is diligently working toward making the dissolution of Bosnia and Herzegovina possible,” he says.

“However, the European Commission’s representatives in Bosnia and Herzegovina cannot be absolved of responsibility for using the now dead EU accession process as a way to deepen the divisions within [the country]. Angela Merkel is the key enabler of this type of behaviour in EU institutions.”

When it comes to any attempt at dissolution, Mr Bajrović is clear that it would mean war.

“There is no other way to divide the country,” he says.

Dr Zijad Bećirović, director of the International Institute for Middle East and Balkan Studies (IFIMES), also dismisses any possibility of Bosnia and Herzegovina breaking up.

“There will be no ‘peaceful separation’ but the process of strengthening Bosnian state institutions will be started so it can better prepare for EU membership,” he says.

As for genesis of the kerfuffle, Dr Bećirović finds it in the reorganisation of the political right in Europe following Joe Biden’s US election win and the withdrawal of Mr Orbán’s Fidesz from the European People’s Party.

“There is a nervousness in their ranks,” he says. “These parties function as a kind of ‘fraternity’ and as supposed protectors of ‘Christian’ Europe and European values but most of them are anti-Semitic. In reality, behind it all is a political hypocrisy and crime on a large scale, and some of the politicians from this ‘fraternity’ are classic mobsters. They’re trying to paint themselves as important, but they are not.”

He adds that this will not impact Bosnia and Herzegovina, as the country is “not an EU project” but an American one.

“The US will not allow anyone to jeopardise their project. The architecture of borders in the region is finished, and there isn’t political will in the international community for the creation of new states, which can be seen in the examples of Catalonia and Kurdistan,” he explains.

“Bosnia and Herzegovina is fertile ground for such ideologies because of its population structure and the supposed Islamist threat. These are the last throes of such policies in the region, because they still think that something can change drastically as dialogue between Belgrade and Prishtina enters its final phase.”

However, with the Slovenian presidency of the EU Council now just over two months away, the whole incident couldn’t have come at a worse time.

And despite the denials of the Slovenian officials, any mention of redrawing borders in the Western Balkans is fraught with danger.

The break-up of Yugoslavia, and the wars and war crimes which followed, are still fresh in the region’s memory. And there are those, like Mr Dodik himself, who still advance ideas of separation along ethnic lines.

Any encouragement – even when disguised as diplomacy – is ill-advised.