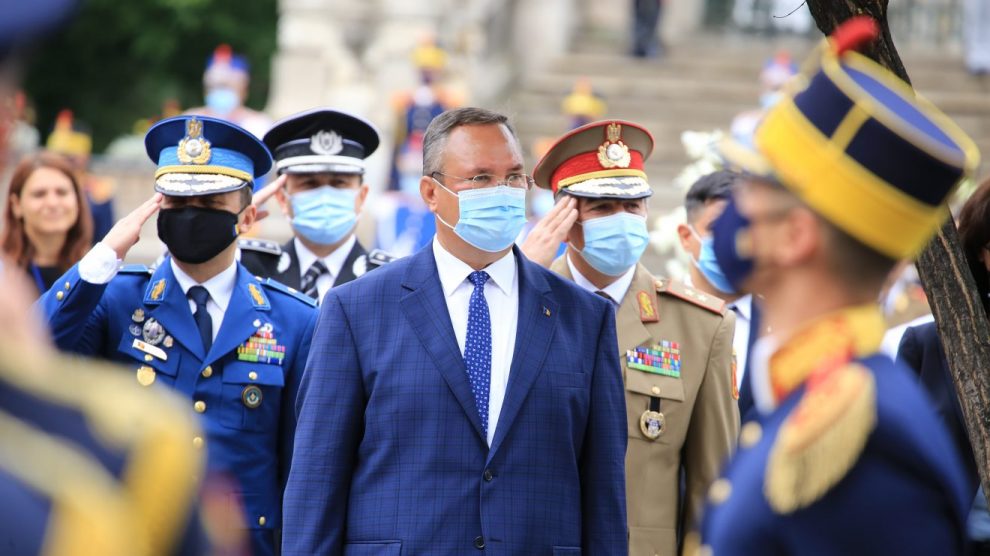 In 2014, Romania’s then prime minister, Victor Ponta, was forced to hand back his doctorate after it emerged that much of his thesis had been plagiarised. The country’s current PM, Nicolae Ciucă, now faces a similar accusation.

Romania’s prime minister, Nicolae Ciucă, is facing calls to step down after it was alleged on January 18 that large parts of his doctoral thesis had been plagiarised.

A journalist from the investigative news platform PressOne, Emilia Şercan, who has in recent years become a thorn in the side of Romania’s notorious so-called “doctorate factories”, says that Ciucă’s 2003 thesis in military science contains plagiarised content on “at least” 42 of its 138 pages.

“Nicolae Ciucă’s doctoral thesis has no academic relevance,” she adds.

Şercan has previously revealed the plagiarism of several key Romanian politicians, including Gabriel Oprea, a former minister of defence, and Petre Tobă, a former interior minister, and has been subject to death threats as a consequence of her work.

Ciucă, a retired four-star army general who has been in office less than two months at the head of a grand coalition that includes his Liberal party (PNL) as well as the centre-left Social Democrats (PSD), has denied the accusations of plagiarism, saying in a statement that, “the thesis was written in accordance with the requirements of the time”.

He has asked the ethics committee of the Romanian University of National Defence (UNAP) to analyse the claims.

In December, Romania’s Minister of Innovation and Digitalisation Florin Roman was forced to resign after an investigation by journalists found significant irregularities on his CV and evidence he plagiarised from an academic paper.

Roman quit his post after a daily newspaper, Libertatea, called into question his educational credentials. The newspaper’s journalists accused Roman of having plagiarised part of his master’s thesis and said they could find no evidence for the existence of a book on the subject of digitalisation – his only link to the portfolio he held – that Roman listed on his CV.

Ironically, Roman said that he had resigned so as not to affect the image of the prime minister, Ciucă.

“The explanation that Ciucă has given is unconvincing and does not answer the accusations levelled against him,” says Dacian Cioloş, leader of the opposition Save Romania Union (USR).

In 2020, Romania’s highest court confirmed that a former prime minister, Victor Ponta, had plagiarised large parts of his own doctoral dissertation.

It was the science journal Nature that first revealed Ponta had copied much of his thesis, in 2012. The ethics commission of the University of Bucharest later found that Ponta had plagiarised 115 pages of his 297-page thesis.

In 2014, Ponta took the unusual step of handing back his doctorate, although he continued to deny plagiarism.

At the time, there were calls for his resignation over the issue from then-President Traian Băsescu, which Ponta ignored. He eventually resigned a year later after street protesters demanded his resignation following a fire at a nightclub, Colectiv, which killed dozens.

Romania’s current president, Klaus Iohannis – an ally of Ciucă – has yet to comment on the latest allegations of high-level plagiarism in Romanian politics, although a spokesperson told the Agrepress news agency that the prime minister’s request for the thesis to be analysed was “correct”.

The wealthy doctor will see you now

That so many high level officials and politicians in Romania are keen to get themselves doctorates is primarily a question of remuneration, says Claudia Postelnicescu, a Romanian lawyer and political consultant. “The law offers better salaries for those with a PhD,” she tells Emerging Europe.

“It’s also a scheme for accessing more funds, and offering themselves and their affiliates professorial jobs, which are extremely well paid, even though they never set foot in a university. This in turn offers them status and the illusion that they are just as intelligent and intellectual as those who really have studied and innovated in certain subjects,” she adds.

A report published late last year by RFE/RL revealed that university bosses in Romania can earn as much as 8,000 euros per month: an astronomical figure for a country that is the second poorest in the European Union.

Of the just over one billion euros per year Romania’s universities receive in state funding, the majority is spent on salaries. However, just one Romanian university – Babeș-Bolyai University in Cluj – features in the top 1,000 of the latest World University Ranking by Academic Performance.

“And of course, a PhD creates the perception – especially for politicians – that they deserve to be where they are. Romanians are very sensitive to all kinds of paper titles, the more the better,” says Postelnicescu.