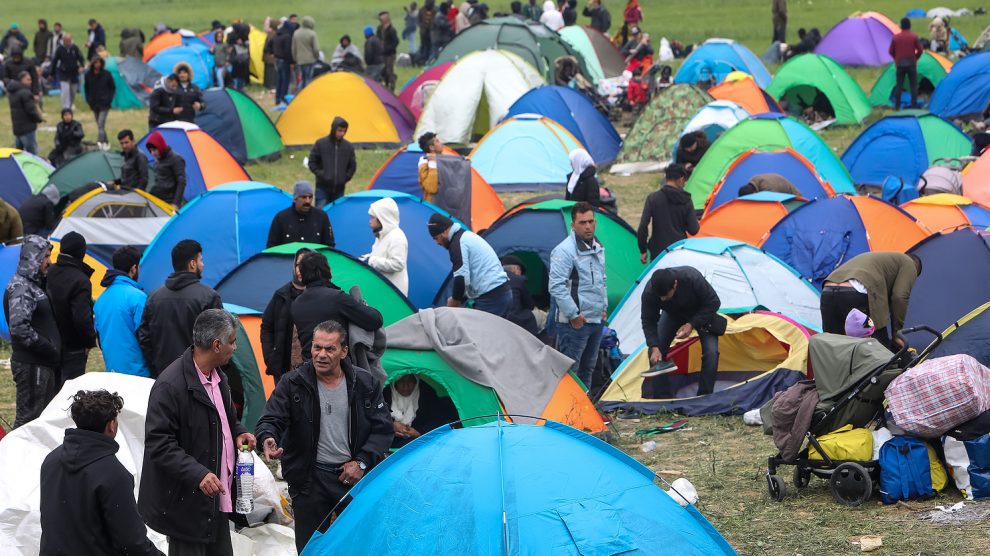 As the crisis on the Belarus-Poland border eases – to a certain extent – human rights groups call for more solidarity with migrants.

The crisis at the Belarus-Poland border is leading to serious human rights violations against migrants and asylum seekers by both governments, according to Human Rights Watch (HRW).

In a major new report, Die Here or Go to Poland: Belarus’ and Poland’s Shared Responsibility for Border Abuses, HRW documents serious abuses on both sides of the border. People trapped on the Belarus border with Poland said that they had been pushed back, sometimes violently, by Polish border guards to Belarus despite pleading for asylum.

On the Belarusian side meanwhile, accounts of violence, inhuman and degrading treatment and coercion by Belarusian border guards are commonplace.

The official number of people who have died on the border since the crisis began currently stands at 12, but human rights activists believe the number is higher.

The HRW report comes just a day after the European Union proposed blacklisting transport operators involved in facilitating the smuggling or trafficking of people as part of its response to what it calls “state-sponsored instrumentalisation of people at the EU’s external border with Belarus”.

In a speech to the European Parliament, President of the European Commission Ursula von der Leyen said: “Attempts to destabilise the EU by instrumentalising people will not work. The EU is united and taking various actions to resolve the situation at the EU’s external borders with Belarus. Today, we are presenting a new proposal to blacklist transport operators involved in smuggling or trafficking of people into the EU, as I first announced two weeks ago. We will never accept the exploitation of human beings for political purposes.”

She added that the EU was in the process of coordinating its sanctions with the United States, Canada and the UK.

“This is not a migration crisis. This is the attempt of an authoritarian regime to try to destabilise its democratic neighbours,” she said.

To ensure that the EU has the appropriate tools in place to combat the use of migrants for political purposes, the Commission is proposing a new legal framework allowing the EU to adopt targeted measures against transport operators of any mode of transport (land, air, inland waterways and sea), that engage in or facilitate smuggling or trafficking of people into the European Union.

The measures could include the limitation of operations in the EU market, the suspension of licenses or authorisations, the suspension of the rights to refuel or carry out maintenance within the EU, and the prohibition to transit or fly over the EU, make technical stops or call into EU ports.

The mid-November standoff at the Bruzgi border crossing between Poland and Belarus, where thousands of people were trapped, was the culmination of developments since last May following the state hijacking by Belarus of a Ryanair flight from Athens to Vilnius to arrest a dissident journalist, Roman Protasevich. His arrest triggered European Union sanctions against Belarus, to which Belarus president Alexander Lukashenko responded by stating that he would open Belarus’ border to migrants by facilitating visas.

Since August, thousands of people, mainly from Syria, Iraq, and Yemen, have traveled to the Belarusian capital of Minsk, through Middle East-based holiday tour operators making false claims of easy EU entry.

“While Belarus manufactured this situation without regard for the human consequences, Poland shares responsibility for the acute suffering in the border area,” says Lydia Gall, senior Europe and Central Asia researcher at Human Rights Watch. “Men, women, and children have been ping-ponged across the border for days or weeks in freezing weather, desperately needing humanitarian assistance that is being blocked on both sides.

In a letter to Human Rights Watch, Polish authorities denied that they engaged in pushbacks, separating families, or refusing to consider asylum claims.

However, citing a recent amendment to the law in Poland, they said border officials were authorised to immediately return people who crossed the border illegally and, as of November 16, border officials had prevented 29,921 people from crossing illegally this year.

Human Rights Watch also criticised the European Commission for failing to speak publicly about Poland’s responsibility for the abuses and the human crisis at its border, or to clearly call on Poland to stop banning media and humanitarian groups from areas where abuses are taking place.

“The European Commission should start showing solidarity with the victims at the border on both sides who are suffering and dying,” Gall says. “Belarus may have orchestrated the crisis but that doesn’t absolve Poland and EU institutions of their human rights obligations. Brussels should push Warsaw to put preservation of human life at the core of its response.”

In recent days the crisis at the border appears to have eased, as Minsk cleared a number of migrant camps and began a series of repatriation flights – mainly to Iraq.

The European Commission has agreed to provide up to 3.5 million euros to support voluntary returns from Belarus to countries of origin.

However, thousands of people remain in warehouses close to the border, and authorities in Warsaw have warned that while Minsk may have changed tactics, it has not given up on its plans to use migrants fleeing the Middle East and other hotspots as a weapon.

The Polish defence minister last week said that the crisis could last for some time.

Kazakhstan wins key victory in ongoing dispute with Moldovan oligarchs
EU enlargement is not just about democratic values and the rule of law. There’s the economy to think about too
Comment