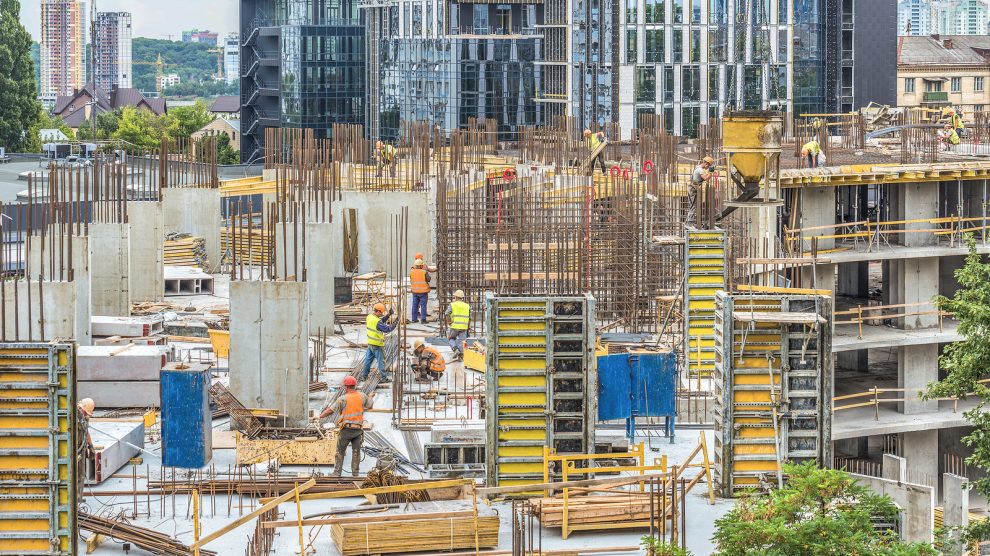 Real estate prices in Kyiv have been skyrocketing in recent months, with little sign of the bubble bursting anytime soon.

Take a drive through the Ukrainian capital Kyiv, one of the things that becomes immediately noticeable is the abundance of construction sites.

Throughout the city, more and more apartment blocks and “living complexes” – essentially gated communities of apartment buildings – are springing up.

The left bank of the city – once an industrial zone with just a few scattered apartment blocks – now is chock full of new constructions, many over 20 storeys tall. The city’s real estate sector is visibly booming.

All of this new construction, however, is still not enough to meet demand.

According to John Suggitt, managing director at the Kyiv Real Estate Recovery Fund, Kyiv has a “chronic shortage of apartments”. Statistics from the Kyiv city administration show that average available apartment space per resident is about 20 square metres. For comparison, in more developed cities around the world, the average is between 30 and 40 square metres per resident.

With new constructions failing to keep pace with demand, and an already-established lack of available apartments, prices are rising rapidly, with little sign of a downturn on the horizon.

“According to our statistics, from last July to this, the average purchasing price for apartments went up by around 20 per cent,” says Halina Parkhomyuk, director of real estate agency Kniazhiy Dim.

A growing city in a shrinking country

The rise can be explained by a number of factors. Kyiv is the economic and political centre of the country, attractive for internal migrants from elsewhere in the country. In fact, Kyiv is the only major Ukrainian city whose population is currently growing, while the population of the country as a whole continues a steady decline.

And despite the economic downturn caused by Covid-19, the real estate sector in the city emerged unscathed – in fact, it appears to have been bolstered by the pandemic.

Parkhomyuk says that there was a major hike in demand after the first wave of Covid-19 and the subsequent quarantine, and property prices have grown accordingly.

“The quarantine intensified the tendency to invest in property,” Parkhomyuk tells Emerging Europe. “Property came to be seen as a much safer investment, in these uncertain times when so many businesses were and still are going under…it is also a steady source of supplementary income. Most of our clients buy to rent.”

This is a key element – it appears that most of the demand for property purchases is coming from people looking to invest in real estate, and not buy a home for themselves. This means that the available properties are being concentrated in relatively few hands – and with mortgages often coming with high interest rates, few people can afford to invest in new housing projects.

In 2020, mortgage rates in Ukraine averaged 18 per cent. To attempt to make housing more affordable for citizens, the Ukrainian government introduced an affordable mortgage programme in March, offering a mortgage rate of seven per cent to some borrowers, mainly young families.

However, according to Parkhomyuk, seven per cent is still quite a steep rate, particularly compared to Europe where mortgage rates are usually two to three per cent.

Furthermore, she says, even the affordable mortgage programme is out of reach for many young families.

“They would need a huge package of documents, just to verify their age, occupation, salary. It is a very difficult and time consuming process. The programme exists in theory, but in practice it is rarely used.”

The increase in property prices has also seen a concurrent and often proportional increase in rents. Although rents for apartments dipped quite significantly throughout 2020 and early 2021 due to the pandemic precipitating a minor exodus out of the city, they have since rebounded strongly.

“We had to restructure our organisation and focus more on houses than apartments,” says Irina Panashenko, a realtor in Kyiv. “For months, we were getting more calls from landlords than potential tenants. Properties in the city were empty, sometimes for close to a year.”

Now, however, the city is again full and rents are back on an upward trend. According to data from online marketplace OLX, the cost of long-term rent in Kyiv has risen by three per cent since last April – this is taking into account the dip during the worst of the pandemic.

For now, the Kyiv real estate bubble appears to be continuously expanding. And as long as there remains the same chronic deficit of properties, the situation looks set to continue along the same path.

Recent political developments also look set to influence housing prices. On July 1, Ukraine’s parliament adopted a bill under which people selling three or more properties in a year will be subject to 18 per cent income tax, up from the current rate of five per cent.

This has been done to clamp down on property speculation. However, Lev Partskhaladze, president of the Confederation of Builders of Ukraine predicts that this will only cause housing prices to go up – by as much as 40 per cent.

With mortgages unaffordable for significant swathes of the population, and Kyiv the only major Ukrainian city on a visibly upward economic trajectory, affordable housing looks set to continue to be out of reach for regular Kyiv residents.

Germany’s Greens might not be able to halt Nord Stream 2, but their impact on CEE will be significant
US withdrawal from Afghanistan sparks scramble for influence in Central Asia
Comment