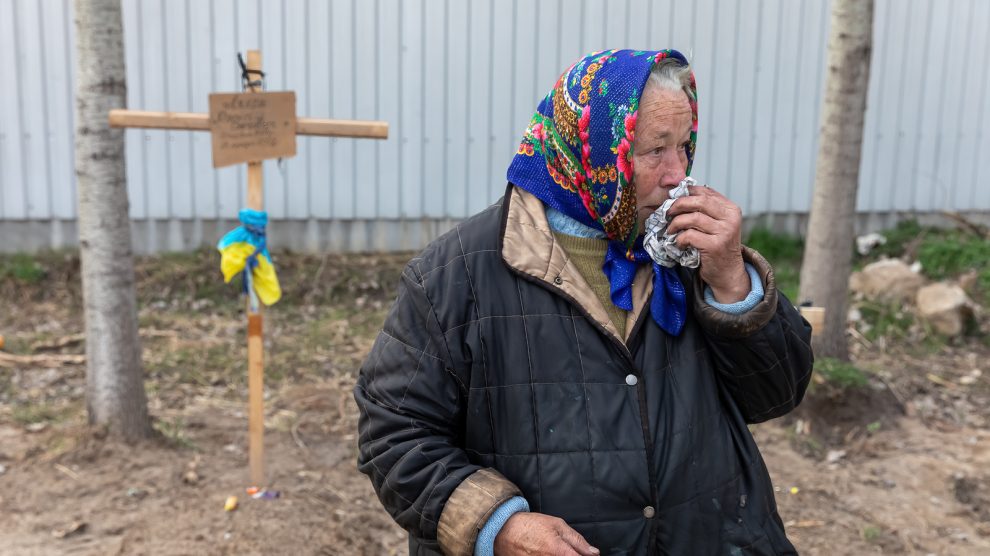 On the day that Ukraine sentenced a Russian soldier to life in prison for war crimes, human rights groups have renewed calls for EU member states to close what it calls ‘impunity gaps’.

Human rights groups have called on the European Union and its member states to take concrete steps to strengthen the international justice system, including through national prosecutions of crimes under international law.

Member states should expand the reach of justice by adopting necessary laws, creating or reinforcing specialised war crimes units, strengthening cooperation among states, and providing greater financial and political support to the International Criminal Court (ICC) and other accountability mechanisms so they can impartially carry out their work.

Since Russia’s full-scale invasion of Ukraine in February, EU countries and other governments have worked to engage a range of accountability tools to ensure the prosecution of grave crimes committed in the context of that conflict.

The EU has also made clear that it supports all measures to ensure justice for serious crimes, wherever they take place. Now, the European Union and its member states should build on this unprecedented support for accountability for crimes committed in Ukraine to strengthen the cause of justice worldwide, the human rights groups said.

“This year’s EU Day Against Impunity shines a spotlight on the fact that much more is needed to effectively address grave human rights violations around the world,” says Balkees Jarrah, interim international justice director at Human Rights Watch.

“EU countries should work together to extend principled support for accountability for atrocities not just in Ukraine but in other conflicts where civilians suffer widespread abuses.”

Governments and international judicial bodies have initiated a number of accountability efforts in response to the crimes in Ukraine. On March 2, the International Criminal Court (ICC) announced the opening of a formal investigation following the request of a group of ICC member countries.

Authorities in France, Germany, Lithuania, Poland, and Sweden have opened their own criminal investigations under the principle of universal jurisdiction. On March 4, the UN Human Rights Council voted to establish an international commission of inquiry to document war crimes and human rights abuses. The EU has expressed its support for all of these mechanisms to investigate and gather evidence of war crimes and crimes against humanity in Ukraine.

Following its decision to open a Ukraine investigation, the ICC called on the court’s member countries to provide his office with resources to support its work across all situations under investigation at the court through voluntary contributions and gratis personnel. Several EU member countries have since announced that they will provide the court with additional financial and human resources outside the ICC’s regular budget.

While the positive response of ICC member countries to the prosecutor’s request signals a commitment to justice, it also reflects an acknowledgment that the court does not have the resources necessary to fulfill its mandate, the human rights groups say, adding that the making of these recent pledges by ICC member countries in the context of one specific situation also risks perceptions of politicisation and selectivity in the court’s work, which could undermine its legitimacy.

“The fact that the court’s workload has outpaced its resources is nothing new: this is an institutional problem that requires an institutional solution by bolstering the court’s regular budget, rather than relying on voluntary contributions,” says Melinda Reed, acting convenor of the coalition for the ICC.

“It’s clear that states’ chronic underfunding of the ICC over the years has negatively impacted the court’s effectiveness and delayed victims’ access to justice.”

Not all EU member states have national laws defining crimes under international law, and some lack jurisdiction to prosecute such crimes when committed abroad, leaving impunity gaps within the EU. Only a minority of EU member states have set up specialised war crimes units, and more should consider doing so, the groups said. Even in the countries that have war crimes units, they are often understaffed and under-resourced with just a handful of investigators and prosecutors despite a mounting number of cases.

“The increasing number of universal jurisdiction cases across Europe shows that investigations and prosecutions of serious crimes by national courts are possible with the right tools in place,” says Philip Grant, executive director of TRIAL International.

“Effective and impartial justice for serious crimes is achievable where there is the right combination of appropriate laws, adequate resources, institutional commitment, and political will.”

Ukraine’s Prosecutor General Iryna Venediktova said on May 23 that there were about 13,000 cases of alleged Russian war crimes currently being probed. On the same day, a Russian soldier was sentenced to life in prison Monday for killing an unarmed Ukrainian civilian in the first war crimes trial since Moscow’s invasion began.

The verdict, which caps days of proceedings in a Kyiv courtroom, could set the stage for a string of other prosecutions for allegations of atrocities committed by Russian forces during the conflict.

Sergeant Vadim Shyshimarin, 21, pleaded guilty to violating the laws and customs of war under a section of the Ukrainian criminal code after he admitted to shooting an unarmed 62-year-old man in the head in a village in northeastern Ukraine in the early days of the war.

Ukraine war places future of Bosnia back on the international agenda
Why Russia needs to be humiliated in Ukraine: Elsewhere in emerging Europe
Comment