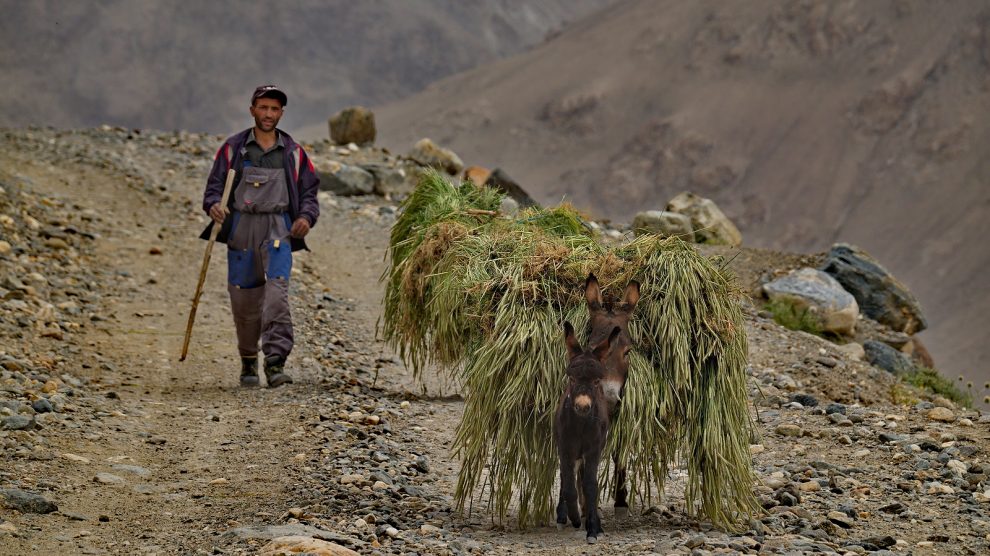 The impact of the Covid-19 pandemic on Tajikistan’s economy has seen more Tajiks than ever before selling up and moving elsewhere: predominantly to Russia.

The number of Tajiks arriving in Russia has seen a dramatic increase this year, with around a quarter of the country’s working-age population heading to Russia for work.

Migrant labourers have long been Tajikistan’s top export, the money they send home a major sources of capital. According to the World Bank, in 2019 the remittances sent home by Tajik workers in Russia exceeded 2.6 billion US dollars, three times the value of all other Tajik exports that year and equivalent to approximately 28 per cent of GDP.

The percentage fell slightly in 2020 as Covid-19 hit the Russian economy, forcing many Tajiks to return home (at least temporarily), but still accounted for 26.68 per cent of GDP. Throughout Europe and Central Asia, only Kyrgyzstan (30.1 per cent of GDP) is more reliant on remittances.

Now, as the Russian economy – particularly the services and construction sectors – recovers, Tajiks are back in record numbers. Between January and September, Russia’s Interior Ministry says that more than two million Tajik citizens entered the country. Over the same period, about 70,000 Tajik citizens received Russian citizenship.

Since independence in 1991, Tajikistan has been locked in a perennial struggle to develop its economy. Thirty years on it remains one of the poorest states in the former Soviet space. While between 2000 and 2019 the poverty rate fell from 83 per cent of the population to 26.3 per cent, and the economy grew at an average rate of seven per cent, the rate of job creation has not kept pace with the growing population, leaving the economy vulnerable to external shocks, while the role of the private sector in the economy remained limited.

Many of the country’s woes date back to 1992, when a five-year civil war broke out with disastrous social and economic consequences.

During the devastating war, one of the main objectives of the opposing sides was to seize control over the Tajikistan Aluminium Company (Talco), one of the country’s largest exporters.

When a United Nations-sponsored armistice finally ended the war in 1997, incumbent president Emomali Rahmon – he had been elected in a rigged vote in 1994 – was able to cement his position and soon began consolidating control over both the state and its main businesses.

Rahmon, a former collective farm boss, has dominated Tajik politics and business ever since: in 2016 constitutional changes formally made him “the leader of the nation”, effectively allowing him to rule indefinitely.

Few businesses owned by people outside of Rahmon’s inner circle have managed to survive. The unemployment rate is 7.5 per cent, and the average salary around 1357 somoni, the equivalent of 120 US dollars. Deprived of opportunity at home, emigration remains the only option for many Tajiks.

Anna Jordanova, a research fellow at the Association of International Affairs, a Prague-based think tank, says however that low salaries are not the only reason for the exodus.

While she acknowledges that people are finding it increasingly difficult to make ends meet on their current salaries and hence are looking for higher wages elsewhere, there is more to it.

“The [lack of] availability of goods in shops, rising living costs, difficult working conditions or just simply not receiving salaries regularly and on time; all of these combine to convince Tajiks they are better off taking jobs abroad,“ she tells Emerging Europe.

The World Bank says that the share of households reporting reduced food consumption increased to 33 per cent in August 2021 compared with 28 per cent a year earlier. The sharp increase in consumer prices coupled with falling household wage incomes increased food insecurity, particularly those without remittance income.

This was accompanied by supply chain interruptions and gas price spikes, which underpinned cost increases for everyday goods.

Non-monetary poverty indicators in rural areas remain high, with only 36 per cent of the population in rural regions having access to safe drinking water.

Russia has long been the preferred destination for migrating Tajiks, as it has for others from the Central Asia region.

According to Jordanova, Tajik migration to Russia predates independence, and is key to the growth of the Russian economy.

“The Russian Federation has shown a willingness to open its labour market for migrants from other countries, and this has become an integral part of the national economy,” she explains.

Russia is not the only fruit

But even though Russia is the main destination for Tajiks, it is not the only one.

Then there is the US.

Several years ago, Tajik citizens became eligible for the United States’ Electronic Diversity Visa scheme, also known as the Green Card Lottery, a global competition for around 50,000 visas that allow holders to legally live and work in the United States.

In the last round of the lottery, around 2,300 Tajiks workers succeeded in obtaining US green cards.

Continue the Change: What to expect from the winners of Bulgaria’s latest elections
Slovakia in lockdown; Bulgaria investigates deadly bus crash: Emerging Europe this week
Comment