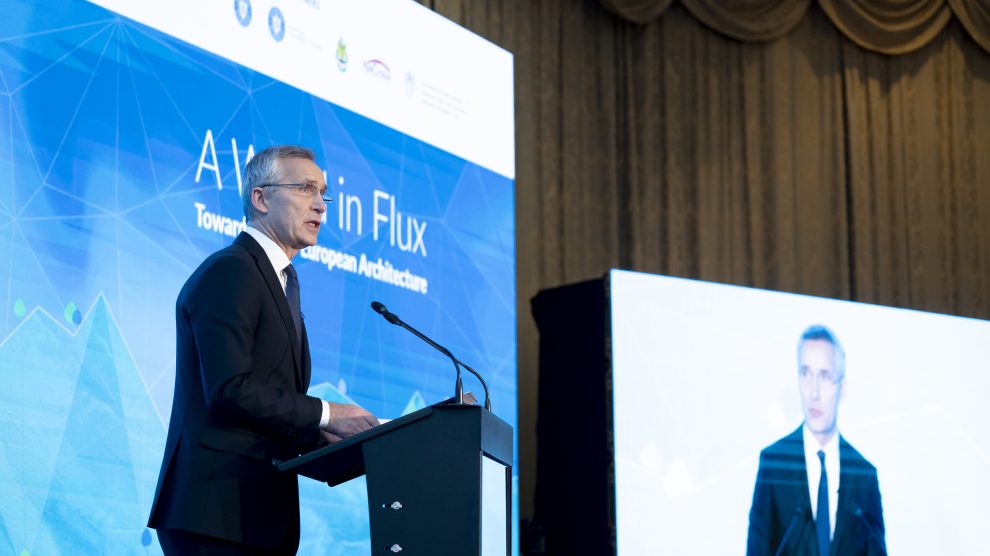 As Europe’s centre of gravity shifts east, the countries of emerging Europe must grasp the opportunities and responsibilities coming their way.

In Bucharest in April 2008, after rebuffing US demands to put Ukraine (and Georgia) on an immediate path to NATO membership, the defence alliance’s leaders did at least promise that the two former Soviet republics would one day join.

Earlier this week, also in Romania’s capital, during a meeting of NATO Foreign Ministers, the alliance reiterated that commitment.

“NATO’s door is open. We have demonstrated that NATO’s door is open by recently allowing Montenegro and North Macedonia to become members, despite Russian protests, demonstrating that Russia does not have a veto. It’s for the 30 allies and aspirant countries to decide on membership, no one else,” said NATO Secretary General Jens Stoltenberg said during the 11th Aspen-GMF Bucharest Forum, held on the margins of the ministerial meeting.

“[Vladimir] Putin invaded Ukraine saying that he wants less NATO at his borders. He is getting the opposite. He’s getting more NATO troops in the eastern part of the alliance. And he will get Finland and Sweden as NATO members. We have demonstrated that NATO’s door is open not only with words. […] And we stand by that too, on membership for Ukraine.”

“The most immediate and urgent task is to ensure that Ukraine prevails as a sovereign, independent democratic nation in Europe,” Stoltenberg added at a press conference following the ministerial meeting.

“And to do so, we need to mobilise as much as we can, when it comes to military, economic, financial and humanitarian support to Ukraine. And this is exactly what we do. If Ukraine does not prevail as an independent sovereign state, then of course, the membership issue is not at the table at all. Because then we have no candidate member anymore in Ukraine.”

Ukraine presented its National Recovery Plan at an international donor conference in Lugano in July. So far, however, the democratic world has not agreed on a plan to help the country rebuild after the war, leaving a void.

At the Bucharest Forum, Thomas Kleine-Brockhoff, vice president and director of the Berlin Office at the German Marshall Fund of the United States (GMF), led a discussion on Ukraine’s reconstruction, emphasising that designing the reconstruction process should begin as soon as possible.

Kleine-Brockhoff also led the team working on Designing Ukraine’s Recovery in the Spirit of the Marshall Plan, a paper that says the ultimate goal of recovery “is for Ukraine to find its place among market-oriented democracies and, ultimately, the European Union.”

On June 23, the European Council recognised the European perspective of Ukraine, Moldova and Georgia and granted candidate status to Ukraine and Moldova. The EU also expressed its full and unequivocal commitment to the membership perspective of the Western Balkans and called for the acceleration of the accession process.

“One lesson from this war is we should have listened to those who know Putin. They have been telling us for years that Putin would not stop,” European Commission President Ursula von der Leyen said in her State of the European Union speech in September, referring primarily to Poland, the fastest-growing power in Europe, and the Baltic states, which since February 2022 have had a leading role in the global coalition supporting Ukraine.

Indeed, Russia’s invasion, the importance of defending the region, its emerging economic significance and the future focus on rebuilding Ukraine have seen an eastern shift in the geopolitical centre of gravity of Europe.

According to Blas Moreno, editor-in-chief of El Orden Mundial, a leading Spanish international affairs website, “in geographical terms, everything is going to shift towards the East. Economically and politically, it is going to give the EU a much more diverse identity. […] And for the southern states, such as Spain or Portugal, it is something that will be hard to avoid, we are going to lose influence.”

A new breed of leaders

What’s clear is that emerging Europe is maturing. The eight countries that were part of the first wave of EU enlargement in 2004, have been EU member states for 18 years and now fully understand not only how to navigate the EU’s complex institutions but also the global order. As a result, new leaders have emerged.

Slovakia’s Maroš Šefčovič, vice-president of the European Commission responsible for interinstitutional relations and foresight; European Prosecutor General Laura Codruta Kövesi, a Romanian and Emerging Europe’s Public Figure of 2020; and Executive Vice-President of the European Commission in charge of Trade Valdis Dombrovskis, from Latvia, are making their presence felt within the bloc.

Then there are the fearless national leaders such as Estonian Prime Minister Kaja Kallas, Moldovan President Maia Sandu (our Public Figure of 2022), Svetlana Tikhanovskaya, the leader of the Belarusian Opposition (our Public Figure of 2021), as well as a group of Ukrainian leaders — Foreign Minister Dmytro Kuleba; Deputy Prime Minister and Minister of Digital Transformation Mykhailo Fedorov; and the country’s President Volodymyr Zelensky, branded “the new Mandela” by former UK Foreign Secretary Sir Malcolm Rifkind.

This group is strengthened by other leaders with significant roles in international institutions and authority in these turbulent times — Bulgarian Kristalina Georgieva, managing director of the International Monetary Fund and the 2018 laureate of Emerging Europe’s Princess Marina Sturdza Award; and Mircea Geoană, NATO deputy secretary general and a member of the Emerging Europe Council.

Reflections on the future

“Europe’s strategic centre of gravity is moving east. This is not just a simple observation of a strategic nature, but a fact. It must also be an economic, technological and political shift. This new situation in Europe creates conditions for the strategic relevance of the countries on the Eastern Flank. We are moving to a new reality, a reality that we need to take advantage of,” Geoană told me during the Bucharest Forum.

It is now time for the countries of emerging Europe, those nations in the new centre of gravity, to reflect on their new role.

“Our Europe is united in peace and freedom and is open to all European nations who share our values,” German Chancellor Olaf Scholz said at the Charles University in Prague at the end of August.

“Above all, however, it is an active rejection of imperialism and autocracy. The currency of the European Union is not supremacy or subordination, but rather the acknowledgement of diversity, a level playing field between all of its members, as well as plurality and the balancing of different interests.”

And emerging Europe should be and is more visible in that diversity and plurality.