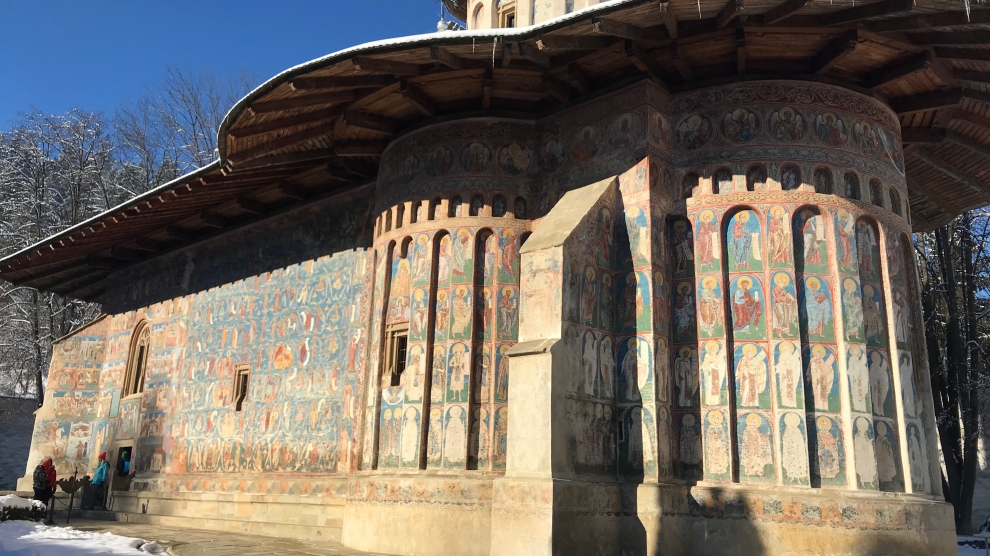 No visit to Romania is complete without seeing the magnificent painted monasteries of Bucovina.

Amidst often fierce debate regarding the amount of public money being spent on the construction of Bucharest’s giant new Orthodox cathedral, what often gets forgotten is that even when completed, the new church will be – to put it politely – far from aesthetically pleasing.

It’s as if the architects were given just one instruction: make it big. As such, it has far more in common with the Romanian parliament next to it – one of the largest and ugliest buildings in the world – than with the many, many jewels of Orthodox architecture of which Romania can boast.

Not the least of these are the exquisite monastery churches found in the far north of the country, in the region known as Bucovina, part of the historical province of Moldavia. Most lists of Romania’s leading five attractions usually place the monasteries front and centre, followed by the Villages of Maramureș, the Fortified Churches of Transylvania, the Danube Delta and the Fagaraș Mountains.

Even when complete, Bucharest’s new cathedral is not likely to make the list.

Incredibly, despite having lived in Romania for more than two decades and having travelled at length around most of the country, the monasteries had until earlier this month somehow passed me by. Taking the opportunity provided by Romania’s national day, December 1, which marks the day in 1918 when Moldavia and Wallachia were unified with Transylvania to form the country we know today, I decided to right that particular wrong.

While Bucovina is scattered with hundreds of monasteries – at the side of the main road which leads to Suceava, the largest city in the region, a large sign proclaims this as the Land of Monasteries – it is the five monastery churches at Sucevița, Moldovița, Arbore, Humor and Voroneț which attract the most visitors.

The five, along with another three at Suceava, Patrauți and Probota have since 1993 been part of the UNESCO World Heritage List, recognised as masterpieces. Their exceptional composition, the elegance of the characters, and the harmony of the colours blend perfectly with the surrounding countryside, which is itself spectacular.

I began my exploration at Sucevița, the last of the great monasteries to be built (construction began in 1586) and for a number of reasons the most impressive of them all. It has undergone no significant alteration in the course of its history, and the fortified monastery walls conserve their initial appearance, while the surrounding countryside, rural and forested, has undergone few transformations.

The church exterior boasts a magnificent depiction of the Ladder to Paradise. Red-winged angels in orderly rows attend the righteous on a slanting ladder to the heavens, each rung inscribed monastic virtues. Sinners fall through the rungs and are driven by grinning devils to the chaos of hell. On the southern side, foliage entwines the rows of figures in the Tree of Jesse. Following it is the Hymn to the Virgin.

The external paintings originally covered the entire church. Over the years, the weather has battered the southern side but the northern facade remains in glorious condition.

The monasteries reflect the troubled times in which they were built. Christian Orthodox Moldavia was fighting a succession of wars of survival with the expanding Ottoman Empire and the monasteries were often raised as a means of giving thanks to God for victory.

They also had a simpler purpose. At the time, the vast majority of the local population was illiterate. Indeed, it was not until the early 20th century that literacy in this part of the world became the norm rather than the exception. So the external (and, indeed, interior) frescoes were at once expressions of faith and thanksgiving as well as a beautiful, graphic way of conveying important messages from the Bible.

You will need your own transport to visit them, as public transport in this part of Romania is all but non-existent. From Sucevița I drove next to Moldovița, on which construction began in 1532. Here, the elaborate exterior frescoes depict scenes from the life of Jesus, as well as the Siege of Constantinople, which commemorates the intervention of the Virgin Mary in saving the city from Persian attack in 626.

From here I made my way to Voroneț, perhaps the most commercialised and busiest of the monasteries. Just a few kilometres from the town of Gura Humorului, in order to get to the monastery I had to run the gauntlet of a long, narrow street lined with stalls selling all sorts of souvenirs – some of which are genuine local handicrafts (well worth buying), while much else is pure tat.

At Voroneț, the exterior frescoes are painted on a bright blue background: the colour is known as Voroneț blue and is said to be unique. It’s certainly striking, and the depiction of the Last Judgement on the western wall is the finest painting I saw at any of the monasteries.

Time allowed me to visit just one more monastery, this time at Humor, a short drive north. It was one of the first of Moldavia’s painted monasteries to be frescoed and, along with Voroneţ, its paintings are probably the best preserved. Yet where at Voroneţ the dominant colour of the frescoes is blue, here a reddish-brown is prominent. Again, the Siege of Constantinople and the Last Judgment take prominence, and it’s worth noting that the Persians trying to sack Constantinople are portrayed as Turks: Persia was not Moldavia’s enemy in the 16th century, the Ottoman Empire was.

While there is more to Bucovina than the monasteries – the region is also known for its painted eggs, and there is a wonderful little museum in Moldovița dedicated to them – to visit this part of Romania and not take in at least a couple of the painted churches is to do yourself a disservice. As they have for centuries, they embody a unique and homogeneous artistic phenomenon, directly inspired by sacred Byzantine art. It is a shame that the architects of Bucharest’s new cathedral did not find similar inspiration.

Emerging Europe’s new additions to the UNESCO World Heritage List
The Colour of Pomegranates: One of the most unique films ever made
Comment