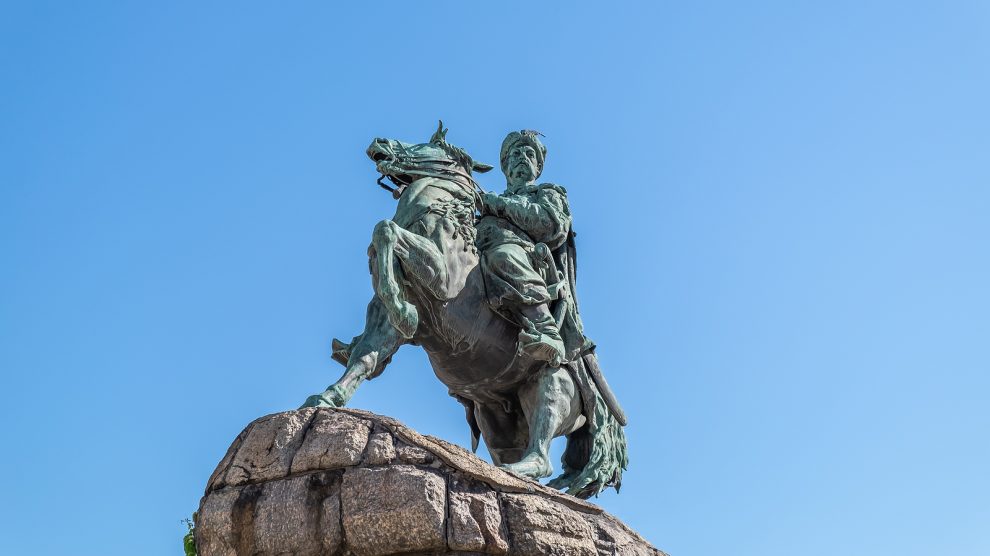 History in Central and Eastern Europe is rarely simple. The legacy of Cossack leader Bohdan Khmelnitskiy – a hero to some, traitor to others – is just one example, a fascinating case study of how history often mirrors the present.

Widely considered to be one of the founding fathers of the Ukrainian nation, his image occupies a major part of Ukrainian cultural heritage, with cities across the country boasting squares, parks and streets dedicated to him. Indeed, an city – Khmelnitskiy – carries his name, while his face adorns the five hryvnia banknote.

Despite this, Khmelnitsky’s is a complicated and controversial legacy. While revered for his rebellion against the Polish-Lithuanian Commonwealth and for laying the foundations of a Ukrainian identity, Khmelnitsky is also decried by Ukrainian nationalists for the 1654 Treaty of Pereyaslavl in which Ukrainian Cossacks pledged allegiance to the Tsar of Muscovy. This set the stage for the eventual incorporation of most of the territory of modern-day Ukraine into the Russian Empire.

For Poles, Khmelnitsky’s uprising was a major factor in the abrupt ending of the Golden Age of the Polish-Lithuanian Commonwealth and the subsequent years of conflict and strife, known as the Deluge, which ended with the demise of the union state. For the Jewish communities of Eastern Europe, Khmelnitsky’s image is even more negative: to them, he represents one of a long line of oppressors of the Jewish people.

According to Ukrainian historian Mikhailo Hrushevsky, “Khmelnitsky’s personal biography is as short on concrete verifiable facts as it is immeasurably long on the legends that enveloped him…making him the beloved hero of all kinds of tales and fictions, and later of works of poetry and belle-letres as well.”

In a way, this varied historiography encapsulates the turbulent and often extremely violent process of nation building in Europe, which often turned into ethnic and sectarian conflicts, making the major events and figures of the era somewhat ambiguous. Khmelnitsky and his uprising are no exception.

Khmelnitsky was born in 1595 in Subotiv, Ukraine, to a family of minor Cossack landowners. The Cossacks were a caste of people, often of mixed Slavic-Turkic stock, who were descendants of serfs fleeing bondage to the “wild steppes” of southern Ukraine. Beset by slave raids from the Crimean Khanate, these groups ended up acquiring an increasingly militaristic character and often allied with the Polish-Lithuanian Commonwealth against the Turkic Muslim kingdoms in the region.

Most of modern day Ukraine had been under the domination of the Polish-Lithuanian Commonwealth since the Kyivan Rus principality was shattered by Mongol invasions of the 13th-century. Many of the Ukrainian Orthodox peasants – then referred to as Ruthenians – were confined to serfdom in the Catholic kingdom. In practice, their condition was akin to slavery. Furthermore, Orthodox Christians received no political representation and were marginalised by the strongly Catholic state.

April 2021 marks the 373rd anniversary of an event which irrevocably changed Ukrainian history. Khmelnitsky got into a personal dispute with Daniel Czaplinski, a starosta (a Slavic title akin to a royal administrative official) of his local region.

The facts are murky – some contend the dispute was over property, others that it was over the affections of Khmelnitsky’s wife, Helena.

In any case, Khmelnitsky’s property was raided and seized by the representatives of the Polish crown. His son was badly beaten and died shortly after. Khmelnitsky petitioned higher-ranking authorities, but his protests fell on deaf ears.

Subsequently, Khmelnitsky began meeting with various Cossack leaders. Understanding the deep resentment bubbling beneath the surface of the Orthodox population – both among the Cossacks yearning for greater autonomy and the Ukrainian peasants crushed under the heel of serfdom – Khmelnitsky became convinced that it was time for an armed revolt.

In December 1647, he led a small force of Cossacks to disarm a small Polish garrison in modern-day Zaporozhia Oblast and decisively defeated a royalist counterattack.

In 1648, Khmelnitsky was elected hetman, the highest military title, during a council of Cossacks. In the space of a few months, and aided by an alliance with the Crimean Khanate, the Ukrainian uprising rampaged through most of modern-day Ukraine, taking the cities of Kyiv, Chernihiv and Lviv.

The war culminated in the Battle of Zboriv, where a 25,000-man Polish-Lithuanian army was crushed by a joint Ukrainian-Crimean force led by Khmelnitsky and Khan Islam Giray of Crimea. This led to the signing of the Treaty of Zboriv, which gave substantial autonomy to the Cossacks and banned royal military forces, Polish-Lithuanian gentry and (largely Jewish) royal administrators from Ukrainian lands.

However, hostilities resumed not long after. This time, the Ukrainians, fighting without their old Crimean allies, suffered a heavy defeat in the Battle of Berestechko. Subsequently the Polish-Lithuanian crown reasserted control over much of the area it had lost in the 1648 uprising.

Berestechko shattered the moral and fighting capacity of the Ukrainians who could do little to resist the reversion to Polish-Lithuanian dominion. Against this backdrop, Khmelnitsky in 1654 signed the fateful Treaty of Pereyaslavl: deciding that allying with the fellow Orthodox kingdom of Muscovy was preferable to living under Catholic rule, Khmelnitsky swore an oath of fealty to the Muscovite Tsar.

The years that followed saw the substitution of Polish-Lithuanian domination with Russian domination – Muscovy expanded against its weakening neighbours, and came to realise its dream of uniting the east Slavic peoples who had made up Kyivan Rus.

That Khmelnitsky signed Ukraine over to the Russians is a point of great contention within contemporary discourse. Ukraine’s current national anthem is based on lines from a 19th-century Ukrainian poem, Shche ne vmerla Ukraina, but omits the following line: Oh Bohdan, Bohdan/Our great Hetman!/For what purpose did you give Ukraine/to the evil Moskals. (Moskal is a derogatory Ukrainian term for Russians).

These lines demonstrate the broad ambivalence towards Khmelnitsky – acknowledged as a great leader, yet denounced for his collaboration with the Tsar.

In Jewish historiography, Khmelnitsky’s image is that of a brutal tyrant, known as Chmiel the Wicked. Jews had come as refugees to the Polish-Lithuanian Commonwealth after being expelled from Spain following the Reconquista. There, the Commonwealth welcomed them with open arms and often used them as administrators for holdings of the crown and the gentry in the peripheries of the Commonwealth.

Due to the inherently unjust nature of serfdom, this brought the Jews directly into the path of Ukrainian rage. During the uprising, horrific massacres were committed by the Ukrainians against Jewish civilians and government administrators (as well as Catholic Polish and Lithuanians) throughout the territory of modern-day Ukraine. Some Jewish chronicles from the era put the death toll as high as 100,000, the start of many testing periods the Jewish community in the region would have to endure for centuries.

Jewish chroniclers have likened Khmelnitsky to Haman and Amalek, two of the major enemies of the ancient Israelites in the Old Testament.

The Russian Empire tried to hold Khmelnitsky up as a symbol of the unity and fraternity between the peoples of Russia and Ukraine. The statue of Khmelnitsky in Central Kyiv was commissioned in 1863 and completed in 1888, under a Tsarist government. Mikhail Mikeshin, the artist commissioned to create the statue, originally planned on depicting representatives of the vanquished enemies of the Ukrainian uprising – a Polish lord, a Catholic priest and a Jewish leaseholder – being crushed under the hooves of Khmelnitsky’s horse.

However, even the notoriously reactionary Tsarist government rejected Mikeshin’s original plans, due to the blatantly xenophobic and sectarian overtones. Soviet authorities, particularly after rehabilitating the Cossacks in the 1930s, continued using Khmelnitsky as a unifying symbol – this alarmed some Soviet intellectuals, particularly the more orthodox Marxists, who saw this as a reversion into reactionary nation-state building.

In 1954, on the 300th anniversary of the Treaty of Pereyaslavl, Nikita Khrushchev transferred administration of Crimea to the Ukrainian Soviet Socialist Republic, and changed the name of the city of Proskuriv to Khmelnitsky. The city continues to bear his name today.

Nevertheless, today, Ukrainians have a largely positive view of the Cossack hetman. A 2018 poll by Ukraine’s Rating Sociological Group found that 73 per cent of Ukrainians view Khmelnitsky in a positive light. In 2005, Viktor Yushchenko, one of the leaders of the Orange Revolution, was sworn in as president while holding a mace that had belonged to Khmelnitsky.

Debate will continue for many decades, perhaps even centuries, over the true legacy of Khmelnitsky, with more virulent nationalists holding onto the notion of him as a traitor. This sentiment is particularly prevalent in western Ukraine, where there are larger numbers of Catholics and people who identify positively with the years of the Polish-Lithuanian Commonwealth. The Jewish community, of course, still views him as one among a long list of demagogues who brutalised Jewish people in Europe.

Despite this, the uprising occurred so long ago that Khmelnitsky’s image can be molded to fit whatever ethos the current government is promoting.

In the words of the Soviet historian Mikhail Pokrovsky, “history is present-day politics projected onto the past”. With Ukraine lacking in uncontroversial heroes, Khmelnitsky’s image can at least be used to promote the narrative of Ukrainians’ yearning for freedom.