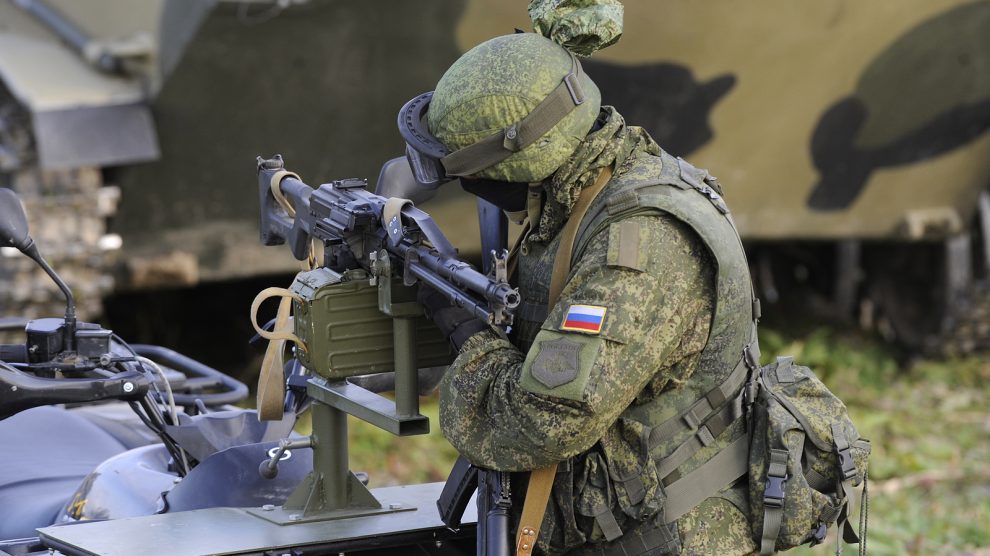 Russian troop movements and threatening rhetoric from the Kremlin have raised fears of a possible escalation of the seven-year conflict in the east of Ukraine.

Exchanges of gunfire – in violation of multiple ceasefires – are not unusual in eastern Ukraine.

Most evenings, soldiers from either side of the contact line sporadically take shots at each other. However, March 26 saw an unusual spike in fighting near the village of Shumy in Donetsk Oblast.

Four Ukrainian soldiers were killed and another two were wounded in clashes which lasted a full day. In a statement, the Ukrainian military said that “armed forces of the Russian Federation once again violated the ceasefire” using “82 millimetre mortars, automatic grenade launchers and high-calibre machine guns prohibited by the Minsk agreements.”

The incident was the largest escalation since the signing of the most recent ceasefire in July 2020 and brings the year’s death toll of Ukrainian military personnel to 16.

On March 30, reports began surfacing about increased Russian troop movements on the country’s border with Ukraine. According to Ukraine’s foreign minister, Dmytro Kuleba, troops have been deployed in three places: on Ukraine’s northern and eastern borders, as well as in the Russian-occupied Crimean peninsula.

Estimates vary for the extent of the latest deployments.

One official quoted by the New York Times claims roughly 4,000 Russian troops were dispatched to the border areas. According to Ruslan Komchak, chief of staff of the Ukrainian armed forces, Russia has deployed 28 battalion tactical groups – amounting to roughly 20-25,000 soldiers.

This has sparked alarm amongst Ukraine’s allies. Since the March 26 clashes and subsequent reports of Russian military deployment, the US military’s European Command raised its alert level from “possible crisis” to “potential imminent crisis” – the highest level. This also comes amid reports that on March 29, NATO jets intercepted Russian planes ten times in a single day.

Ukrainian President Volodymyr Zelensky has tried to downplay fears of a potential conflict, stating that “military exercises and provocations along the border are traditional Russian games.”

Kremlin spokesperson Dmitry Peskov said that Russia can “move its armed forces within its territory at its discretion.”

Peskov meanwhile has regularly accused the Ukrainian side of staging constant provocations along the line of contact.

Nevertheless, on April 2, Zelensky had a phone conversation with US President Joe Biden, the first time since Biden’s inauguration in January that the United States has taken an active role in Ukraine.

According to a statement from the White House, during the call Biden “affirmed the United States’ unwavering support for Ukraine’s sovereignty and territorial integrity in the face of Russia’s ongoing aggression in the Donbas and Crimea.”

Russia’s latest maneuvering is not the first time this year that its troop movements have caused alarm within Ukraine.

In February, there were reports that Russia was conducting drills involving airborne forces in occupied Crimea. This renewed oft-repeated fears that Russia was planning on pursuing a military solution to Crimea’s water crisis in the form of a military operation around reservoirs in southern Ukraine.

Others believe that with domestic popularity waning and economic progress stagnating following his poor handling of the Covid-19 pandemic, Russian President Vladimir Putin could be looking to drum up small conflicts to boost his popularity.

Not a step towards all-out war

However, Michael Kofman, director of Russia studies at the CNA Corporation, a nonprofit research and analysis organisation based in Virginia, dismissed concerns that these latest developments are a step towards all-out war.

“The movements are made in a decidedly visible manner. In other words, they are intended to be seen, and are less indicative of preparation for a covert attack…consequently these overt shifts in military posture and readiness appear to be primarily coercive and demonstrative in nature,” he wrote in a piece for The Moscow Times.

Kofman went on to state his belief that the most likely explanation behind these developments is Russia seeking to pressure Ukraine and its western allies over a lack of progress in the implementation of the Minsk II ceasefire.

The head of the so-called Donetsk Peoples’ Republic announced that for the first time the breakaway region would organise a military draft between April 1 and July 15. According to a statement published by separatist authorities, the draft would involve “citizens” born between 1994 and 2003.

This is possibly the biggest indicator that an escalation may be in the offing. The timing of the draft, coinciding with military buildups, escalated fighting and saber rattling is certainly concerning. There have also been unverified videos of Belarussian military troops being deployed to its own border with Ukraine.

Although the full scale of the Donetsk People’s Republic’s draft campaign is yet unclear, Ukraine looks set to be in the headlines in the coming weeks.

Any further escalation will be a major test of the European Union’s influence in its eastern neighbours, as well as of the resolve of the new US president.

‘There aren’t enough of us to be divided’: Vjosa Osmani vows to be a president for all Kosovars
Bulgaria’s PM faces struggle to stay in office despite election win
Comment