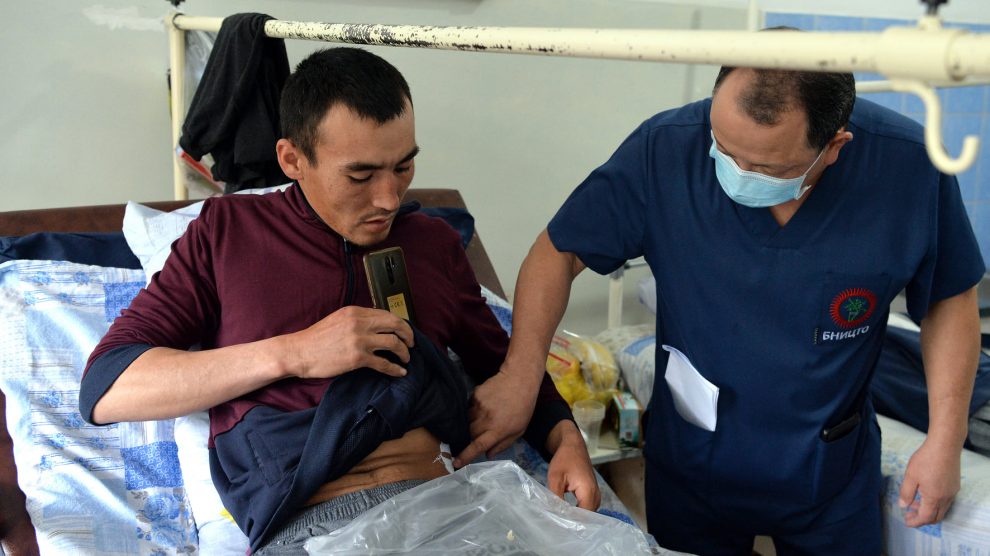 Two days of intense fighting on the border between Kyrgyzstan and Tajikistan last week killed at least 55 people, and injured many more. A ceasefire, in place since April 30, has so far held, but unless the root of the dispute – access to water – is resolved, fighting could flare up again at any time.

A ceasefire between Kyrgyzstan and Tajikistan appears to be holding, as both countries scramble to avoid an all-out war following deadly clashes last week on the border between the two countries.

The fighting, which broke out on April 28, killed at least 55 people, and was the worst in many years, and an indication that there remain serious, unresolved issues between the countries, not the least of which is the scarcity of water resources.

Between a third and half of the 1,000 kilometre-long Kyrgyzstan-Tajikistan border is undemarcated, and much of the border which is considered settled is the result of gerrymandering during the Soviet era: the borders of both countries were originally delineated during Soviet times, where the 15 republics making up the union were organised on the basis of “nations, nationalities and peoples”.

This system of national organisation allowed for the creation of semi-autonomous enclaves populated primarily by ethnic minorities within republics – Abkhazia and South Ossetia in Georgia, and Nagorno-Karabakh in Azerbaijan – all had such status.

It is a similar story in the Kyrgyz province of Batken, where there are two Tajik exclaves, administered by the Republic of Tajikistan and populated virtually entirely by ethnic Tajiks – Kayragach and Vorukh. It was the latter which became the flashpoint for the recent clashes. A relatively fertile piece of land surrounded by one of the most barren Kyrgyz provinces, control of water resources has long been a major point of contention for residents on both side of the exclave’s border.

Last week’s flare-up represented the most serious in a series of border disputes between Central Asian states and will test the diplomatic capabilities of Russia, which has military bases in both countries.

Furthermore, both Kyrgyzstan and Tajikistan are members of the Russian-led Collective Security Treaty Organisation (CSTO). Kyrgyzstan is also a member of the Eurasian Economic Union (EAEU), with Tajikistan having expressed interest in joining.

In addition to this, the clashes also saw mobilisation by local residents and communal violence, apparently encouraged by some state actors.

While the most recent clashes appear to have been triggered by Tajik authorities installing surveillance cameras at a water distribution point, tensions have been high between the neighbouring communities for years. In 2013, Vorukh residents attempted to stop Kyrgyz labourers from building a road around the exclave. The dispute escalated into a brawl involving hundreds of people. In 2015, disputes lead to minor skirmishes between the two nations’ armed forces.

In 2019, Vorukh residents’ anger at road construction again escalated to violence, with two Tajik villagers killed by gunfire from the Kyrgyz side. The month leading up to the most recent clashes also witnessed several high-profile incidents which inflamed tensions.

In late March, Kamchybek Tashiev, head of the Kyrgyz State Committee for National Security, attracted anger from the Tajik government for comments in which he proposed a land swap deal, under the terms of which Vorukh would be ceded to Kyrgyzstan in return for a strip of land from Kyrgyzstan’s Batken province.

Shortly after Tashiev’s remarks, Kyrgyzstan held military exercises in the region involving at least 2,000 soldiers, around 13 per cent of the country’s total number of active armed forces. This may have prompted Tajik president Emomali Rahmon to visit Vorukh on April 9, where he urged “calm and restraint” from locals.

However, on April 24, two Kyrygz construction workers were reportedly abducted. They reappeared a day later and claimed that they had been beaten by Tajik security personnel. At the same time, residents of Vorukh claimed that two young shepherd boys had been beaten by Kyrgyz border guards. Both Kyrgyzstan and Tajikistan deny the respective accusations leveled against them.

The situation was therefore already tense when, according to several reports in Kyrgyz media, Tajik labourers were on April 28 spotted installing surveillance cameras at the Golovnoi water intake facility – which Kyrgyzstan claims is its territory – prompting the Kyrgyz authorities to take action.

Media in Tajikistan meanwhile (which has considerably less press freedom than Kyrgyzstan) gave a contrasting account, claiming that Kyrgyzstan had been plotting to seize the Golovnoi facility and that the Kyrgyz authorities riled up local residents against Tajiks.

What is certain is that by the afternoon of April 28, fistfights had broken out between civilians, and stones thrown. By evening, security forces from both sides were deployed to the area and began shooting. Heavy weaponry, including mortars, were used.

Kyrgyz authorities have since been more communicative about the extent of the damage the fighting caused. According to a statement from Bishkek on May 2, 36 Kyrgyz citizens were killed with a further 183 wounded. Over 50,000 people have fled the fighting or have been evacuated. In addition, the same statement claimed that 78 private homes, two schools, one medical clinic, 10 gas stations, a police station and eight shops were destroyed in the fighting.

Tajik authorities have been more tight-lipped, giving vague statements about casualties but acknowledging that 14 homes had been destroyed on its side, with 15,000 people evacuated. According to one source within the Tajik government, at least 19 Tajik citizens have been killed, including eight border guards and one member of an elite police unit.

Delegations from the two sides met on April 30 and agreed to a ceasefire and to pull back their respective troops. This was followed by a phone conversation between Kyrgyz President Sadyr Japarov and his Tajik counterpart Rahmon.

Almaz Akmataliev, a Kyrgyz analyst, branded the clashes as “specially-prepared aggression of the neighbouring country” and a “massacre of civilians by the Tajik military.”

However, although Russian Defence Minister Sergey Shoygu visited the Tajik capital Dushanbe on April 26, two days before the clashes erupted, it is unlikely that Russia would have egged on one side or the other, due to Moscow having interests in both countries.

Furthermore, both nations are within Russia’s sphere of influence and members of the CSTO, with both the respective leaders friendly with the Kremlin.

Instead, communal rivalries are a more likely cause of the clashes, as opposed to geopolitics. Mass brawls between members of two different ethnic groups are only possible if there are substantial sectarian tensions within the communities.

The videos of armed Tajik civilians cheering as Kyrgyz homes burn support this.

However, as with most conflicts, the ethnic and sectarian aspect is simply a superstructure over the material issues which cause the conflict to occur in the first place. The disputes over water resources and irrigation canals exploded only after the two countries received independence and the administrative boundaries which had existed during Soviet times but were somewhat redundant – became more stringent.

“Water and land resources are needed on both sides,” she says.

In the face of climate change, water is becoming an increasingly contested resource. For decades, the spectre of conflict over water has been looming throughout the world: the confrontations between India and Pakistan over Kashmir, and the Egyptian sabre-rattling in response to an Ethiopian hydroelectric dam are two major examples of inter-state tensions caused by water.

Furthermore, in countries like Nigeria and Mali, increased desertification has led to communal violence over control of rivers, oases and reservoirs.

Although tensions on the Kyrgyz-Tajik border now appear to have calmed, with no fighting since the morning of April 30.

But with none of the outstanding issues which led to the clashes resolved, the situation could escalate again at any time. The latest bout of violence will only have inflamed already-strained communal relations between the Tajiks of Vorukh and their Kyrgyz neighbours.

It is up to the respective governments to find out a solution that works for everyone.

Photo: A Kyrgyz civilian wounded in the fighting receives treatment in a hospital in Bishkek. Source: Official Facebook page of the Kyrgyz presidency.

Is Serbia having its #MeToo moment?
Covid-19: Learning from the Asian Tigers
Comment